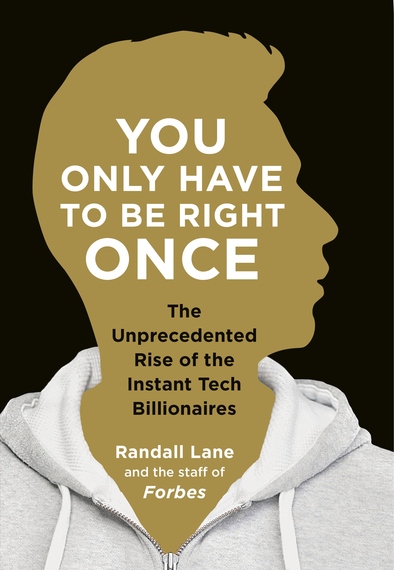 The photographs of the young men who have made an instant fortune in Randall Lane's You Only Have To Be Right Once: The Unprecedented Rise of the Instant Tech Billionaires look like they're lifted from a high school yearbook. Indeed, Twitter and Square's Jack Dorsey's picture in the book, taken from the cover of Forbes' America's Best Entrepreneurs issue could have easily been his soccer team picture. Palmer Luckey, founder of Oculus Rift, which he sold at 21 years old for $2 billion to Facebook, is shown in a snapshot that looks like that of class prankster. "Youth," opines author Randall Lane, editor of Forbes magazine, "has officially ceased to be a disadvantage, upending almost the entirety of civilized history. Previously, whether a blacksmith or lawyer, wisdom and experience rendered you more valuable as years went on. No longer. The kids are fully running the show." 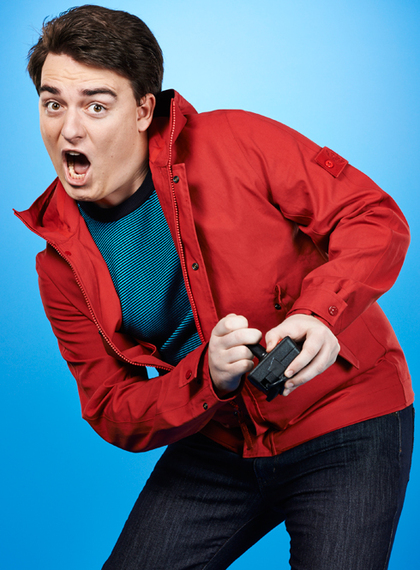 Lane's anthology, culled from the magazine he edits, wouldn't have been possible without his access gained by being editor of the world's premier business magazine. Access and early understanding garnered at the think takes, summits, and both online and print magazine articles he oversees allowed him an eagle eye's view of what was happening in the changing business atmosphere as kids who wrote code bypassed their elders as successful entrepreneurs. Or as Lane quotes, "how a handful of young digital swashbucklers...shrugged off [the past]... to transform how industries operate and fortunes get made." Lane lays out the what, who, and how of this financial phenomenon.

"As you turn the pages of this book, there is a far higher correlation between financial success and a stint as a teen hacker than having daddy's name on a building at Harvard." Indeed, there is a common denominator shared by this all-male (save one) collection, an accurate reflection of the sexism currently prevailing in the technology environment. Or as Lane says, "One of the commonalities this new breed of entrepreneurs has is a Y chromosome." For the most part they're all men. And they're digital natives. They grew up with the internet; they've been of the internet and smartphones all their lives. Since youth seems to be a criterion for these "creative engineers," most have dropped out of college to pursue their passion and their private jets. As Lane says, "this is not a generation of Sam Waltons. They are not salesmen or necessarily people persons."

In 1992 at age 16, Jan Koum and his mother emigrated from Kiev, Ukraine to Mountain View in Silicon Valley. When his mother was diagnosed with cancer, they lived off her disability allowance. By 18 he had taught himself computer networking. He joined a hacker group called w00w00 and "chatted" with Napster co-founder Shawn Fanning. In early 2014, WhatsApp, a company Koum co-founded with Brian Acton, who he had met after taking a job at Yahoo, was purchased by Facebook for $19 billion. Koum took the papers and signed them on the door of the welfare office where he had once picked up his welfare checks.

Lane explains that in some cases his Forbes team is like psychotherapists. "We sometimes become Oprah's couch for young entrepreneurs. These tycoons look upon us almost like confidantes, open up their private lives-- more psychographic than demographic." These stories are about people - not code - and in each telling, it is about inspiration and execution and the founder at his core. The book explores not only the triumphs of these young people but also the disappointments that sometimes lead to depression and insecurities. And this book lays them out.

You Only Have To Be Right Once: The Unprecedented Rise of the Instant Tech Billionaires is both intriguing and inspiring, relaying to an eager audience the hardly believable stories of fifteen self-made men and the Israeli born Adi Tatarko, who founded Houzz with her software engineer husband. These young entrepreneurs, who set out knowing too little about the harsh business climate they were entering to be intimidated, are dubbed "disrupters," continually seeking to upset the status quo. Their innovations are changing the way we live and work. Their game changing technologies impact most Americans, and many others the world over, on a daily basis.

"We led with conviction rather than rationale, because rationale said it was impossible" says Daniel Ek of Spotify.

The book also profiles Elon Musk of Tesla Motors and SpaceX, Kevin Systrom of Instagram, David Karp of Tumblr, and fairly psychoanalyzes Sean Parker of Napster and Facebook. The interviews with these impassioned and emboldened code-writing subjects make for fascinating reading as well as wonderment. For their brilliance and perseverance we are in awe. For their vast wealth--at no time in history have such enormous fortunes been so rapidly created, let alone by those so young--we rely on books like this to de-mystify us.