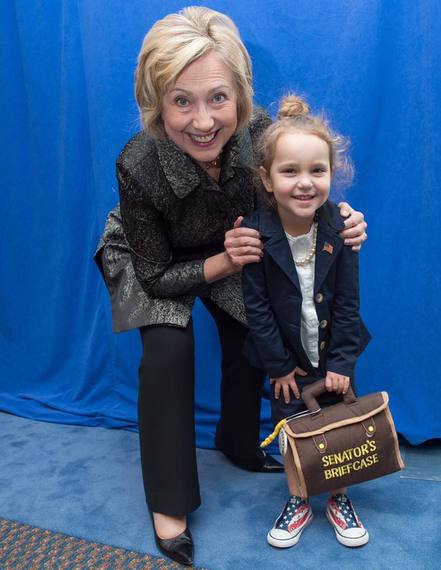 Culture is a wily beast. So difficult to manage, so impossible to predict, yet it is exactly who and what we need to attend to, to honor, at this pivotal moment in our civic evolution. And culture, society, our trajectory as a nation, demands that we expand our thinking to embrace a different paradigm of leadership...

...to elect a female President of the United States.

It's a necessary progression, a turn in the zeitgeist; a cultural revolution in how this large and boisterous country of ours is governed. It's about accepting a more informed view of leadership to understand that men do it differently...but women do it better.

That's not sexist hyperbole. A comprehensive study by the Harvard Business Review, one that analyzed gender differentials in leadership, came to exactly that conclusion: "Women do it better than men."

The majority of leaders (64%) are still men. And the higher the level, the more men there are: In this group, 78% of top managers were men, 67% at the next level down (that is, senior executives reporting directly to the top managers), 60% at the manager level below that.

Similarly, most stereotypes would have us believe that female leaders excel at "nurturing" competencies such as developing others and building relationships, and many might put exhibiting integrity and engaging in self-development in that category as well. And in all four cases our data concurred -- women did score higher than men.

But the women's advantages were not at all confined to traditionally women's strengths. In fact at every level, more women were rated by their peers, their bosses, their direct reports, and their other associates as better overall leaders than their male counterparts -- and the higher the level, the wider that gap grows.

Specifically, at all levels, women are rated higher in fully 12 of the 16 competencies that go into outstanding leadership. And two of the traits where women outscored men to the highest degree -- taking initiative and driving for results -- have long been thought of as particularly male strengths. As it happened, men outscored women significantly on only one management competence in this survey -- the ability to develop a strategic perspective.

There are charts and graphs you can avail yourself of that illustrate the points, but the takeaway is that we are systemically ignoring the exceptionalism of women in positions of leadership simply because we live in a country that has always been male-dominated, has always provided more opportunities, better pay, and more aggressive advancement for men over woman.

That needs to change. And seating a woman in the Oval Office seems a very good way to move that message forward.

But, ah... Hillary Clinton. Has any woman ever been as polarizing, as controversial? One wouldn't think so. Considering her impressive resume, decades of service, and the respect she's garnered around the world, it's stunning to note the sheer volume of irrational, disproportionate, and sexist negativity that comes her way, an onslaught that she remarkably endures and transcends. Whatever else you might say about her (and there's never a shortage of things people might say about her!), the woman has some serious cajones!

Of course, those who actually know her tend to sing her praises. I read and enjoyed Gloria Steinem's analysis from her new book, My Life On the Road, which offers a sharp and personal contrast to the more generalized "Hillary-hate" we witness as a matter of routine. Steinem, a brilliant woman in her own right, has spent a lifetime fighting for women's causes, and her take on "why the White House needs Hillary Clinton" is quite moving. I urge you to click over and read it when you're done here.

But we all know one speaks positively of Hillary Clinton at their own peril. Beyond the knee-jerk response of right-wing haters, we've also got, during this election cycle, the #FeelTheBern gang, with their immediate and often sneering retorts to any post, article, or comment spoken or written in support of Clinton. I'm not sure why there is such hissing antipathy for the "other Democratic candidate," but weary bromides include any combination of "Monsanto, Wall Street, bitch, big banks, 'she lies!!,' crone, Benghazi," etc., all while extolling the "brand positives" of their own candidate. It's tiresome and unnecessary, but has become expected at this point.

As for the boorish "I don't vote with my vagina" meme (per Sanders supporter, Susan Sarandon.), let me say this to that: I don't either. My vagina is too busy doing other more vagina-oriented things to influence my vote. And, believe me, if the female choices for president were limited to Carly Fiorina, Michele Bachmann, or Sarah Palin, my vagina would go running right for the best male option on the Democratic roster. In fact, if I thought Bernie Sanders really was the best candidate, I'd put aside the "old, white, male" issue and vote for the guy (and will in the general if he gets the nomination).

But I don't think that. Given her platforms, her history, her experience, and what I believe this country needs at this moment in time, I'm with her. That isn't blind feminism. It's about acknowledging the historical juncture at which we find ourselves, one in which we actually have a valuable, viable, and very worthy female candidate who offers us the opportunity to change and advance our culture in profound and revolutionary ways.

No one candidate has the franchise on that word; there are many different kinds of revolutions, many other essential issues that need attention, require change, and demand the intervention of compassionate people. And since it's always the quality of leadership that sets the tone, and since we've never availed ourselves of the quantifiable advantages of female leadership in the highest office of the land, how exciting that we have that opportunity now! That's the revolution that has inspired my enthusiasm and that of many others:

The revolution being waged toward gender equality and opportunity, against our historical "old white guy" paradigm of the presidency (one we enjoyed shattering with Obama's wins); against the seemingly intractable barriers against a woman making it into the White House.

A revolution whose success could potentially break down a host of other barriers, inequities, injustices, and limitations society has struggled with since the dawn of this nation.

A revolution that will bring our country in line with countless others that have vaulted capable, meritorious women into roles of significance and power.

A revolution that will imbue the male-dominated world of politics and governance with a very different energy, wisdom, and "'participative, relational leadership style."

A revolution that will set a new bar for empowering women without limitation.

A revolution by which all Americans -- young or old, male or female, Republican or Democrat, rich or poor, white or of color -- will benefit.

For those who've fought for this particular revolution, this is the time, the moment in history, in which Americans will finally be able to look up on inauguration day and say, with grace and pride, "Congratulations, Madam President."

I look forward to that.