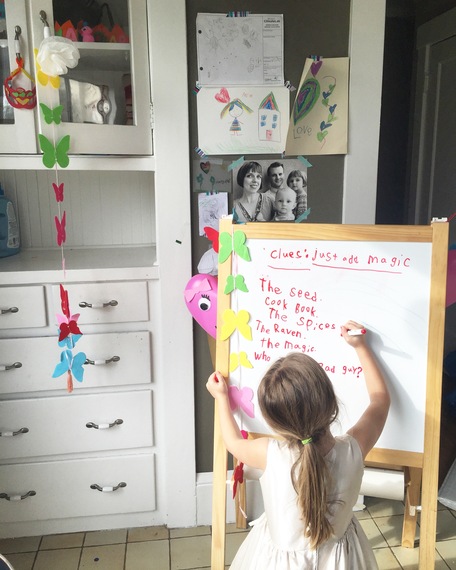 Ok. The title's a bit misleading. You should be binge watching this show with all your kids -- sons and daughters. If the Where is Rey controversy has taught us anything, it's that excellent protagonists appeal to everyone no matter their gender. That being said, my daughters are seven and four years old. And, for the most part, when it comes to age appropriate entertainment with female leads we are left with storylines about tween girl drama, makeovers, crushes and slapstick situations at the mall or latest babysitting job.

It's a barren, bobble-headed landscape.

Enter Just Add Magic, a series about three best friends, a magical cookbook and a curse that needs lifting.The best fruit from Amazon's 2015 pilot season, JAM (yeah, using the acronym means I've completely bought in), is a confection filled with suspense and topped with smarts. The main characters, Kelly, Hannah and Darby (played by Olivia Sanabia, Aubrey K. Miller and Abby Donnelly, respectively) are girls that don't spend any time backstabbing, crushing or shopping. Instead, the first episode presents them with a problem and -- together -- they go about solving it one piece (of cake) at a time. What follows is entertainment that actually engages.

Kelly, Hannah and Darby are all very different. In many shows, overcoming the obstacles presented by those differences would be the main theme. In JAM, with a very few exceptions, the girls accept each other as they are. They then use their unique strengths and weaknesses to expand their vision, rather than constrict their experiences. Refreshingly, when one of them messes up, the other two don't spend any time on blame. Instead, joy of all joys, all three instead just work together to address the issue. The only time this doesn't happen, the finger pointing is a symptom of the magic, not their girlhood. Of course, the absence of girl drama doesn't mean the group dynamic is free of friction or growth. When Darby's birthday is forgotten (and her feeling's hurt), Kelly and Hannah acknowledge they've messed up and work together to create a last minute celebration. In most girl-driven shows, that would be the whole story. In Just Add Magic, it's just the plot device that enables them to address a more interesting, more magical problem.

It should be noted that the complete lack of emoji heart-eyed crushes doesn't mean there are no boys in the show. As my daughter says, "Boys can be friends, too." Judah Bellamy plays Jake, a friendly compatriot that is eager to join in the girl's adventures when he isn't selling bacon wrapped hot dogs from his food bike. The JAM girls are happy to see him when he's around, and happy to continue on their quest when he is not. Little of their conversation revolves around him, and even less of their actions do. This is not to say the show does anything to devalue boys. Far from it. It just takes the common sense stance that when confronted with problems that need solving, it's best to focus on the work at hand.

We started the 13 episode season three days ago. As of this morning, we only have three episodes left. That's a lot of TV. And usually, on a weekend absent of bad weather or illness, I would have felt pretty guilty about letting my kids consume that much screen time. But this? This is a joy. Sitting together, watching their faces, hearing their gasps at each twist and turn. And JAM doesn't just dominate while we are sitting and watching it. We talk about plot theories during dinner. My oldest daughter is maintaining a list of clues in the art room. She's pretty positive she can bullet point her way to the conclusion before we get the the last episode. My four year old has started pulling weeds and drying them in the kitchen. What look like dirt trailing dandelions to me, are really the magical herbs she's readying for her next JAM inspired magical recipe.

On Sunday, I posted a photo of my daughter's list of JAM clues to Instagram. A few hours later, the star of the show, Olivia Sanabia, left a comment on the post saying the picture was adorable. When I showed her comment to my girls, they lost it. Like... running around the house while chanting "Just Add Magic!" kind of lost it. Basically, if they knew what fan fiction was, they'd both be neck deep in JAM spinoffs by now. It was sweet. It also illustrated the fact that -- despite all the real female role models in their day to day lives -- the type of girls that fill their fantasy worlds matter deeply to them, too.

There are a lot of big problems in the world. And it could be argued that a lack of good TV shows for 6-11 year olds is not one of the more sweeping issues. But, in our little corner of that big problem-plagued world, the depictions of girlhood I am able to hand to my girls matter. From the books we read to the shows we watch, our daughter's visions of what their lives can look like now AND later will always be influenced by the stories we tell about girls. As my daughters will desperately tell you, we're still three episodes away from knowing how this story ends. But we do know how it begins -- with three brave, kind, hard-working, problem-solving little girls. And right now, that's the kind of beginning my brave, kind, hardworking, problem-solving little girls need to see.