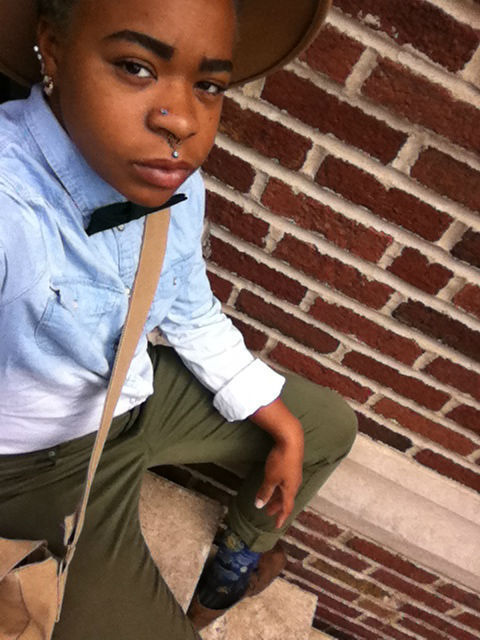 i am twenty, queer, non-gender conforming, trans, black, mentally ill, and despite being college educated and situated in america, i do not expect to live long.

the news reminds me to be realistic. in 2012 police officers killed an average of two black men a week. in 2013, the national coalition of anti-violence programs reported that there were over 2,000 reported incidents of anti-LGBTQA+ violence in america. 72 percent of lgbtqia+ homicides were against trans women. 89 percent of those were transgender women of color. when not consistent from previous years, these statistics rise.

"i do not expect to live long."

i, too, am rising. every week my eyes climb higher as i watch the number of murdered black people, especially trans women of color, increase, and i see myself in their glassing eyes. i see my brother's withering smile in the name of kamal dajani, 26, from texas, and i text him, daily, to remind him that i love him more than i know how to (more than anything else in this goddamn world) because every day could be the last day he'll be alive to read it.

i call my father about nothing at all, closing my eyes as i listen to him chatter, trying to memorize the salt-and-pepper scruff at his chin and the way he squints in booming, heartfelt laughter. i sing my mother songs on the telephone and record conversations with her on long rides and write down the name of her favorite perfume. i write letters every day to the people i love, desperately attempting to capture enough of myself in ink so that when my time comes there will be more to remember me by than just a number, a name, a grainy photo from the seventh grade. my lack-of life expectancy comfortably simmers from pale paranoia to a hard-shelled fact. i am going to die, young. fact.

every week i watch the bodies pile up surrounded by the mourning circles of their families, friends, partners, allies. outside of myself i watch their tears climb back upwards into the corners of their eyes as they are ridiculed into silence, their lips boil down from slate into granite into hard, black lines cut into the skin where their mouths should as the media's shadow passes over them time and time again, in favor of news anchors defaming of the women lost too soon by calling them perverse men.

we are failing trans women of color and people of color because we do not recognize their humanity until they are already absent.

i wonder how the loved ones left behind save the dead in their heads. i wonder if the people they've lost expected to be taken and planned ahead, left behind boxes of perfume-tinted love notes and birthday photos and pages torn from their journals. i wonder if they did the work to make themselves real, and then i wonder why these women had to prove their existence in the first place.

"we are failing trans women of color and people of color."

and i watch the anger climb, too.

it's a shared ascent into rage. we walk it together, because to not dare the path -- to abstain from the gravel and the thistles and the hemlock choked roadside -- is an act of submission. all of us hoofing it onto higher ground, every breath is resistance.

black queer anger is breathtaking by nature because the people who accept it are not to be fucked with. black anger is a middle finger in white god's face and a million voices shouting, "you can catch these hands, too." it is the lifeblood of movements, liquid and scalding, ripping up normative foundations and eroding away oppression disguised as tradition. it is beautiful because it is unafraid of being ugly. and in its ugliness it can be unbearably true and awesome.

trouble is, i fear that we are forgetting how to be. i know i am. the days i don't write or call home the paranoia comes creeping in, cruel and kudzu-like, and strings me up by the lungs. sometimes i lay in bed all day. sometimes it's hard to breathe from all that anticipation. when i find myself able to speak you can clearly see the crests of arcing vines and hear their restless shuffle.

i do not know if i know how not to be paranoid, and i am uncertain if it matters at all.

what does matter when every day could be the funeral? what is there for me, you, us to do than strangle rosaries and burn?

i do not know if i know how not to be paranoid, and i am certain it matters a great deal.

my question is: to who? certainly not to you. because you will read this and walk away. you will not burn. you will keep your white gods aright and breathe easy.

meanwhile we will be wrathful, watching you do nothing.