Headed to London this spring for the Queen's Diamond Jubilee or the summer Olympics? If you happen to meet Her Royal Majesty the Queen, you'll need to know how to curtsey.

Recently, British etiquette expert William Hanson was sent to Manhattan to teach Americans just that, in the hopes of setting a new Guinness World Record, with London's "World Record London." London is trying to become a multi record-breaking city by attempting more than 20 Guinness World Records. This particular event was to set a Guinness Record for the Longest Curtsey Relay in 5 Minutes. Other record-breaking attempts in London this spring include the Largest Parade of Boats, and the Largest Fundraising Event at the London Marathon. This curtsey evening was the only record-breaking event held on our side of the pond. Naturally, none of us jaded New Yorkers knew how, so Hanson was there to show us.

He explained that the word curtsey comes from the word "courtesy." Curtseying, like a handshake or bowing, was a sign of respect to someone, often a social superior.

"To curtsey," he said, place one foot behind the other. It doesn't matter which foot: some prefer left behind right, others vice versa. Then bends the knees slightly to dip."

We tried it. One guy went down so far that Hanson told him be careful or he wouldn't get back up. "A good curtsey is understated," he said. After a few practice attempts, the eighty of us lined up in a u-shape formation. Three Guinness World Record officials started their stopwatches. In the five minutes, we managed 314 curtsies, thus creating a new record. (I can now call myself an official Guinness World Record holder). 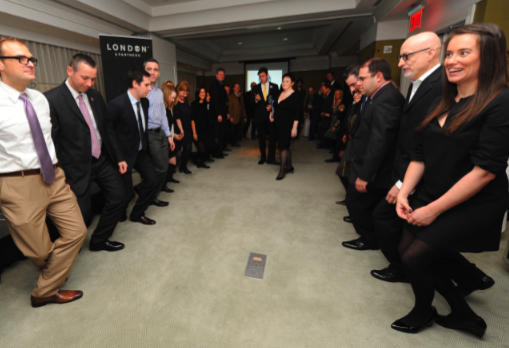 I asked Hanson, "If anyone is in London and happens to see the Queen, are you allowed to look at her? What do you do? What do you say?"

He said yes, one might look at The Queen. "British Royal Protocol is actually very simple," he said. "Remember the following and you will be fine:

1. Do not speak until you are spoken to, although younger/less senior members of the Royal Family are more relaxed about this rule.
2. Only shake hands if they offer their hand first
3. A bow from the neck is correct for men (hand-shake or no hand-shake) and women are to curtsey (
4. The Queen is addressed as "Your Majesty" and then "Ma'am" (to rhyme with "ham," not "farm"). All other members of the Royal family are addressed "Your Royal Highness" and then "Sir/Ma'am."

He also said that The Queen has dropped the rule of no one turning their back on a Monarch, although at some very formal ceremonies it is still practiced by a majority. 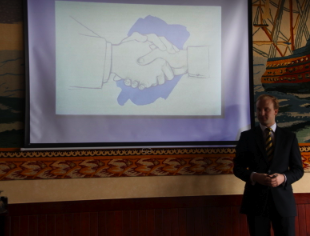 I asked what are some of the mistakes Americans make abroad when it comes to proper etiquette? He admitted that Americans in general are very good at the manners part. The British are good at the etiquette, but not very good at manners. What percent of Britain's population knows proper etiquette, I asked. Only about 10 percent. " Not as many people now know, sadly. Due to the ease of global travel we have adopted differing customs and are now a melting pot of etiquette rules, which is very confusing; no one is ever quite sure which system one is supposed to use. We also live in a time-poor society and are rushing around and people forget to just stop and think about respecting other people, which has not helped keep the etiquette flame burning.'

As a Brit what did he find are some of our weirder etiquette customs? "I find it strange that some Americans, and even some American etiquette consultants, advocate not shaking someone's hand on first meeting because you don't know where their hands have been and could catch a disease or illness. If I were to meet someone and they refused to proffer their hand, I would be greatly offended, and even more so if they explained their logic."

As our American default certainly includes bragging, perhaps you want to participate in some of the London world records or break your own record so you too, can be a Guinness World Record Holder. If so, go ahead and check it out.