It's 20 minutes before class starts, and the students arrive early.

I look forward to this class. It's the one time in my week when I am calm and peaceful. -- Tori, business major

This is no ordinary college classroom. The posted guidelines ask students to remove their shoes, turn off their mobile devices, and place all belongings into the cubbyholes for the 80-minute class session. There are no desks or chairs. No computers or projector screens. Arriving in silence, they choose a cushion and sit down on the floor. 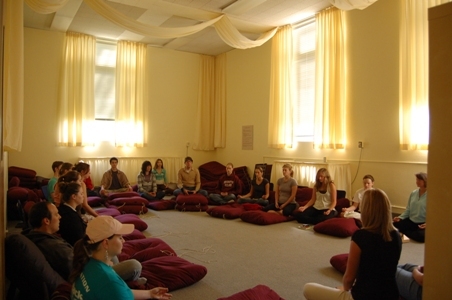 Photo Courtesy of University of Redlands

Meditation makes me more motivated. I go to classes with a new desire to learn and gain knowledge, rather than just get through it. -- Matt, sociology major

It's common for college students to do a "semester abroad." What about a "semester within?" This classroom encourages the inward journey. It cultivates self-knowledge, implicit in the dictum "Know Thyself," honored as a foundation of liberal arts education.

In 2007, The University of Redlands opened one of the first "contemplative classrooms" in the country, valuing an education of the "whole person." No matter their major -- business, psychology, pre-med, education, environmental studies, art -- students say the meditation class helps them to be better students, overall.

Meditation has impacted my ability to think with a peaceful mindset. My mind was always wandering. I am now able to focus. -- Nathalie, psychology major

Travis graduated in 2007 and is a fire fighter. He viewed his Meditation course as significant because it worked with the "inner self." He explained in the documentary film, A Semester Within:

You can't get away from your inner self! It's impossible. So taking a class to learn how to face it, work with it, and deal with it is a 100 times more -- really you can't even put a number on it -- important than all the other things you learn in college.

Learning meditation, we cultivate skills that help in every part of life: concentration, self-awareness, emotional self-regulation, mental training, reduction of text anxiety and public speaking anxiety, self-compassion, compassion for others, appreciation of diversity, and more. 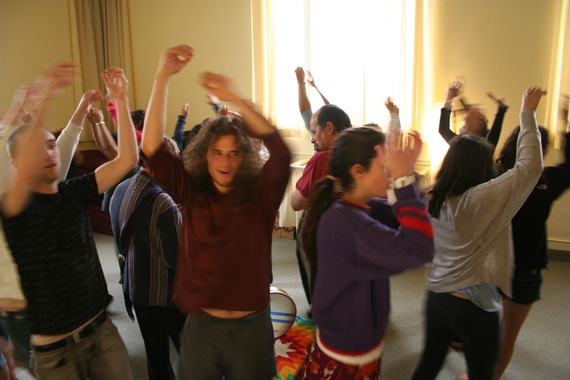 Improvement of physical health is often a byproduct of meditation, as noted by a science major. Meditation reduced his anxiety, ADD, and judgmental attitude. His blood pressure decreased significantly due to this changed outlook on life:

In December of last year, four months ago, my average blood pressure was tested to be around 145/80. A healthy 22-year-old should not have hypertension. The last time I checked my blood pressure, last week, it was at 118/55. The significant difference is most likely a result of my decreased stress coming from my daily meditation practice. -- Steven, chemistry major

In 2005, I offered the first course on meditation for academic credit in the religious studies department. I taught it for free -- outside of my teaching load -- because it was a radical experiment. Who would sign up for a class where you "do nothing?" Although "doing nothing" sounds easy, it is apparently much harder than doing something!

The intolerability of "doing nothing" was studied recently by researchers at University of Virginia and Harvard (July 2014 issue of Science). They asked their subjects to spend 15 minutes alone in a room -- no phone, no gadget, no book, no companion. The subjects were shown a button that, if pressed, would deliver a negative static shock to their ankle. When left alone with nothing else to do, 67 percent of the men chose to shock themselves and 25 percent of the women did the same. One person pressed the button 190 times! The authors summarized their findings: "Most people seem to prefer to be doing something rather than nothing, even if that something is negative."

This is probably one of the hardest classes I've taken because it asks me to do so much that I've never done before -- to see what needs to change inside of me, and then do it! -- Natalie, double major in English and religious studies, with honors 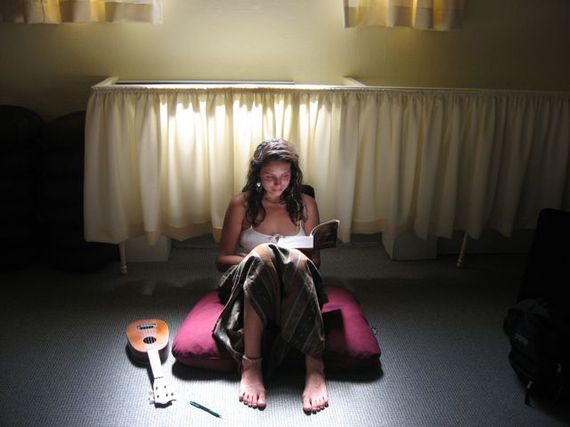 Meditation develops the inner dimension of our humanity. Why is this important? Because who we are on the inside affects everything we say and do on the outside -- all of our decisions, words, and actions. Our inner being has an effect on the world around us.

The world will not suddenly become more harmonious if the individuals that comprise it are stuck in the disharmonies of inner anger, self-hatred, and fear. His Holiness the Dalai Lama: "There can be no outer change without inner change." The meditation class is a semester-long, hands-on education of this timeless truth.

My major is Peace Studies. How will I ever be able to negotiate peace among the nations if I am not at peace within myself? -- Laura, peace studies major

Class ends. Quietly, students put away their cushion, retrieve their belongings, and slip on their shoes. They step back over the threshold into their ordinary lives -- changed. Denise Spencer, the administrative assistant in the office next door to the Meditation Room, has noted the difference for years: "They walk into class stressed out or looking depressed. And after class, they walk out changed -- peaceful, their heads held high."

As my mentor, Dr. David R. Hawkins, taught: "We change the world not by what we say or do but by what we have become."

A little bit of inner quiet goes a long way.