There's been a lot of talk lately about Target's not new policy to let people use the bathroom of the gender they identify with. There's been even more comments. And if it's one thing I love, it's to comment on comments.

There are 7.125 billion people in the world. 500,000 of them signed an online petition to boycott Target. Because everyone knows that the best way to really hit a company where it hurts is to sit on your ass and type your name into a computer.

To be honest, I can't believe Target is still open. After that stunt they pulled last year where they ditched the gender labeling in the toy section. I mean now how are we supposed to know what toys are going to make our boys gay?

There are a lot of people out there who seem very concerned about their safety and well-being now that trans people are allowed to continue to use the rest area that they associate with. Perhaps they should just shop online. From the safety of their own bathrooms. Where the toilets are used by only gender-conforming heterosexual people. The way toilets were meant to be used.

Or here's an idea. Go pee before you leave the house. That way you don't have to worry about being sexually assaulted on your next shopping excursion.

But if you're like me, a middle-aged part-time alcoholic with poor bladder control, chances are you're going to have to pee. I actually go to Target just to pee. Alone.

With all of the press surrounding this non-announcement, I thought I'd do a little detective work of my own. I went to Target and hung out in a bathroom stall to see how long it was before I was accosted by a trans person. And for the first time in the history of ever, I was disappointed by Target. 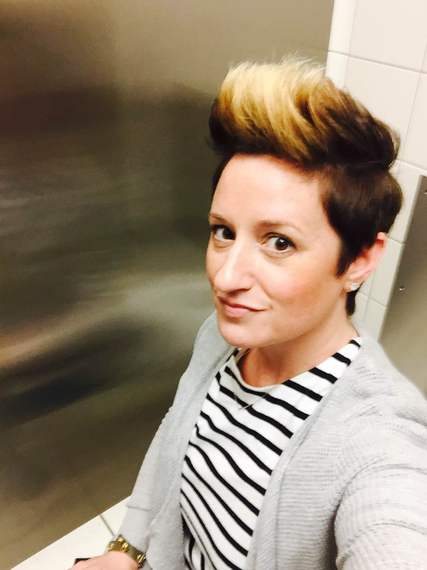 I think I have to start going to other Targets. Because by the sounds of the people up in arms over Target offering basic human rights to all of its customers, there seems to be trouble brewing everywhere except my very own Target. Just my luck.

"This is more about the fact that you should go to the bathroom that matches what is in your pants not what is in your head. I don't care if a gay guy uses the 'guy' stall, I figure penis's should stick together as well as the alternative. "

For your sake, Chris, I hope you have a helluva lot more in your pants than you do in your head. And I agree, penises should stick together. But I think the alternative would be penises not sticking together. So I'm a little confused. Anyway, I do think you should be careful about letting a gay guy use the 'guy' stall. Because I heard you could catch gay from a toilet seat.

"It should be based on current plumbing."

Jeff needs to have the letters d and r before his name. It's as simple as that. Dr. Jeff. Just telling it like it is. Using gender appropriate terms that we all understand. It's all about the plumbing.

"Are you retarded? the argument was the fact that sexual predators will claim to be "trans" or something else to target children and woman."

Oh Sean. If it's one thing I love more than trans people being labeled as rapists, it's a grown ass man calling another grown ass man the R word. You're so classy you probably pronounce it Tar-zhay.

"Yes over half a million and counting that will never step foot in a Target again."

"No problem for Target. You belong at Walmart anyway."

Meow. And there it is. Someone had to say it. We all know this. It's the unspoken hierarchy of big box stores. Target shoppers look down upon Walmart shoppers. But doesn't mean it hurts any less to hear it. Thank you, Cari, for your brutal honesty.

"The bathroom still has a stall door- what worries me is the changing room. Women and children are undressing in an open space to try on clothes. A man can just walk in, strip, and put on a bikini? Why have a changing room- why not just strip in the aisles?"

Joanne, where in God's name are you shopping? And what drugs are you on? And where can I get them?

Ricky Ricardo (I kid you not)

"Anyone who thinks this won't hit their financials is sniffing glue."

And guess where they purchased that glue, Ricky? Target. Aisle 5. On sale. And if it's one thing I hate, it's getting hit in the financials. Ouch. I think Target sells a cup for that.

"I for one will be standing guard outside the womens restroom while my daughter and wife are inside and if anything resembling a male tries to go in at the same time I'm beating the crap out of them. Case closed."

Anything resembling a male? Uh oh. I hope I don't run into Donald anytime soon.

"What if I told you that you could also get sexually assaulted by someone of the same gender as you?"

Check out more of Eileen O'Connor's musings at No Wire Hangers.