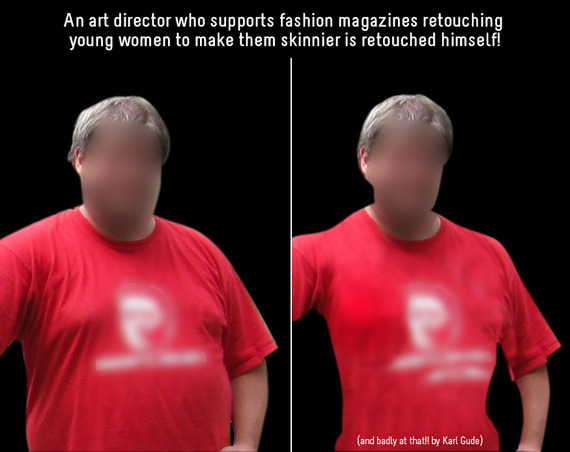 I'm a horrid photo retoucher, but here's my best shot at trimming down a magazine art director who lectured me on my Facebook page in favor of idealizing young women in fashion magazines by slimming them down with Photoshop.

The other day, I posted this link from Upworthy on my Facebook page that criticized Flare magazine for retouching their cover image of Jennifer Lawrence to make her look thinner. Ms. Lawrence has publicly condemned "fat shaming." A magazine art director took offense to the story and condescendingly lectured my friends and me, condemning the blog piece's journalistic merit and defending the practice of retouching photos of young women to make them look skinnier. I took exception to this and ranted right right back at him on how these phoney images can cause young girls (and some, but fewer, boys) to have eating disorders. His rant is below, followed by mine. He didn't know I had spent a decade as a magazine designer. (I chose not to use the designer's name because this isn't about vilifying a single person, but to offer you a peek at how these art directors think. I did tell him I would be retouching his body shape, and he felt that his face needed the most work.)

Sorry, as a magazine editor, I know what it's like to flip through dozens of shots to find the right one. And, do you know what gets my email gong? "That shot, her lipstick is smudged. Her shirt is wrinkled."

To "highlight" a glamour/fashion shot for a magazine cover is pretty common practice. We'll correct color as much as we can.

Usually, the subject is quite happy that we correct.

If you want to know what Lawrence thinks of the photo, ask her. Don't be lazy and insult intelligence of your readers by writing "and my guess is..." That's the sign of a rank amateur.

As well, if you are going to use an old quote from Lawrence in your story, you should note that she agreed to do the cover of Flare, which is, ahem, a FASHION magazine.

And if the writer (Aker) is so outraged, why wouldn't she have the courage to call the editors of Flare and at least seek comment for her piece? No, it's sensational and plays to lowest common denominator to package some fabricated outrage.

When you shoot a celebrity for a cover of a mag, it's a painstaking process. Your photographer and art director work for find the right set and a shoot can last the better part of a day. A big magazine (and mine doesn't) won't just grab a wire image and Photoshop it.

So, Lawrence took the time to be photographed for a cover feature in a FASHION magazine. Yet Aker decides it's the medium that's worthy of scorn, not the subject for making the decision to pose for a major fashion publication.

I'm sorry that you've come in here and insulted magazine art directors by offering my friends and I, the great uninformed, a slap-on-the-wrist lesson on the inner workings of a professional fashion photo shoot. I'm an expert, too. (Had you been less LAZY, you would have looked up who it was who had posted this article). I've attached photos of me with Ford models that were shot during my 10 years as an art director at Newsweek. Amazing how good the model looks without even the slightest hip tuck. (Your use of the intelligence-insulting ALL CAPS for emphasis is quite effective). These studio sessions were a regular occurrence, and we did our share of, "ahem," FASHION covers, sometimes with celebrities, NONE of which was retouched to make the model look skinnier, a model of idealized, impossible-to-achieve perfection. 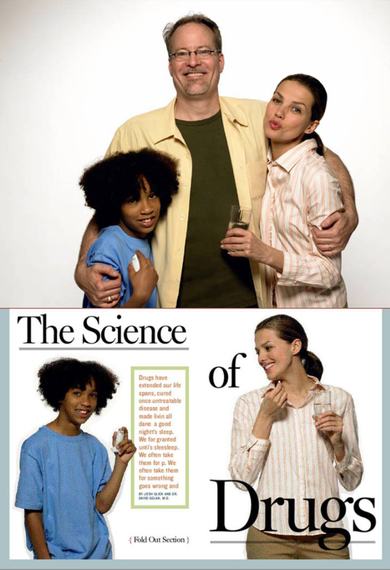 Me with Ford models

This may be where you're thinking, "Aha, well, Newsweek's not an, ahem, FASHION magazine who sells to a whole different audience: innocent little girls who are just DYING to strive for the perfection they see on the cover." (Pun intended.) At Newsweek, we had something that some, NOT ALL, fashion magazines lack: a social responsibility that recognized the power we had to mold minds. I'll bet art directors on cigarette photo shoots also have just horrid days tediously sifting through scores of images to find just the right one that will lure young kids to smoke. Exhausting!

"Fabricated outrage?" You have to widen your narrow vision here. The outrage isn't about a starlet's feelings, as you make it out to be. Think about the broader issue, as we are. It's about little girls dying of anorexia and bulimia, and that's what the outrage is about. As hard as society is working to cure these victims, the fashion and entertainment industries are working way harder and more effectively to keep them just the way they are, thank you very much. Why? Because it turns a profit and keeps photo retouchers fed and in the battle trenches.

According to ANRED (don't be "lazy," look it up, you need to know about this), one out of every 100 young women between 10 and 20 are starving themselves and many more are bulimic. Without treatment, up to twenty percent (20 percent) of people with serious eating disorders die. 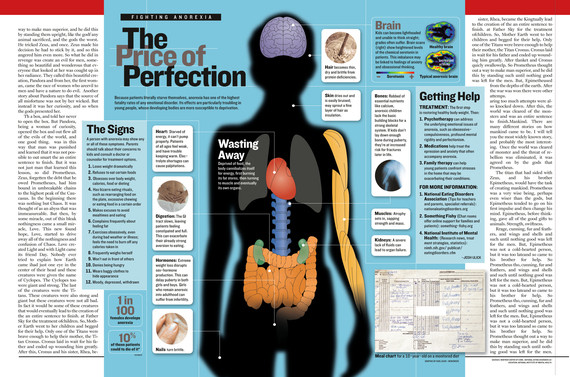 My Newsweek graphic on anorexia

I've also attached a graphic (above) that I made on anorexia for Newsweek. Are you wondering why the image of the girl is a shadow instead of a person? A brave, young, anorexic girl who was on the road to recovery had agreed to be on our cover as well as in the graphic (it would have meant another of those tedious photo shoots you mention... for HER, not us). She wanted other girls to be aware that the price of perfection is too high, but, before the magazine came out, she slid back into her anorexia and was hospitalized at the time of printing.

You bring up magazines "highlighting" and "correcting color." You're right that those are common in magazine publishing, but don't insult our f*cking intelligence by pretending that lifting collar bones and trimming hips is equivalent to that harmless little practice. An old Jennifer Lawrence quote? You call last month old? Huh? Did I miss something here? Don't lie and twist to make your point. Also, don't insult Jennifer Lawrence's intelligence by assuming that agreeing to be on the cover of an evil fashion magazine meant condoning their manipulation of her body. Did they call her to find out if that was OK, or were they "lazy," too?

I'm considering doing my next HuffPost article about this and would like to quote you. Are you available for comment? Courage, Karl, courage.

I informed the art director that I would be posting our rants here, and asked if he would like to comment. His response:

Again, I can say the usual standard is that we (his publication) do it more with older subjects than younger ones. But the practice won't change until a) publicists are out of the picture "Can you make sure you can take that mark off my client's face?" b) Many artists now want mags to sign waivers that they get to preview photos, which we don't do. The fact is a lot of this is done because SUBJECTS and PUBLICISTS often make it a make-or-break clause for a mag.

Ironically, he also claims that retouching body shapes is "verboten" at his magazine!

He's right, though, about some subjects and publicists. In this New York Times article, a photographer says that "in 2002 she shot Tom Cruise when he was wearing braces. She used Photoshop to remove the braces before submitting the photographs, but the magazine asked her to put the braces back in (more of that, please!-KG). 'I was sad because I was like 'now Tom Cruise is going to hate me,' " she said. The photographer has not shot Mr. Cruise since then."

So many fronts in this battle.