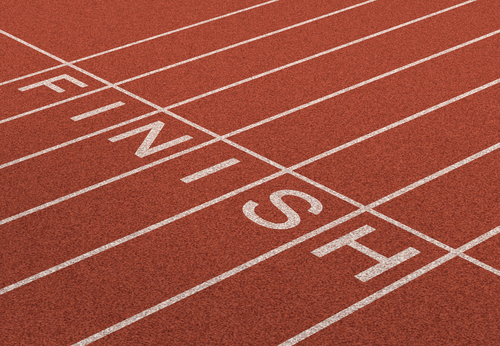 We pursue happiness in America with such passion and purpose. We devote immense amounts of time, effort, energy, and money. Yet, that pursuit seems to be wholly unsatisfying and ineffective, as evidenced by the fact that there exists a 'happiness-industrial complex' in which billions of dollars are spent annually on books, lectures, apps, psychotherapy, coaching, and other products and services. All in search of the Holy Grail of happiness, contentment, inner peace, nirvana, whatever you call it.

One place that many people look for happiness is at the finish line. Yet, I can assure you that it can't be found there. I make this statement from both personal and professional experience.

I grew up as a competitive athlete, first as a world-ranked alpine ski racer, then as a 2nd degree black belt in karate. But I didn't learn this lesson early in my life. It wasn't until I reached my mid-30s that I competed in my first running race. I had run all my life for training for my other sports and for general fitness, but I had resisted racing because I knew what would happen: I would get competitive and want to see how fast and far I could run. Well, that is exactly what happened. I quickly went from a 5K race to a 10K to a half-marathon to a marathon. Once at the distance, I ran ten of them and set my sights on breaking three hours, which I accomplished twice.

But that wasn't enough for me. I had started giving talks to triathletes, so it seemed natural for me to transition from running to triathlons. So, I did my first sprint distance and within three months, I completed the first of two Ironman triathlons (for those unfamiliar with Ironmans: 2.4-mile swim, 112-mile bike, 26.2-mile run).

Though I certainly experienced considerable satisfaction from my efforts, I didn't feel as if these experiences changed me in any meaningful way. Usually, the day after a marathon or an Ironman the only thing I noticed different about myself was my incredible muscle soreness (a source of pride, I might add). Other than that, I was still me and life just went on as before.

I found the same applied to my academic and professional lives. I felt little different about myself after I was accepted to and graduated from Middlebury College or earned my master's degree and Ph.D. from the University of Colorado, Boulder. I had no epiphanies when I accepted my first faculty position, had my first (or any subsequent) book published, appeared on The Today Show, or any other successes I've had in my career since.

Clearly, I have crossed a lot of literal and metaphorical finish lines. And, though each of my achievements produced feelings of accomplishment, pride, satisfaction, there was no big payoff in terms of real happiness.

Their problem was the same, wrapped in different guises. They set in their mind that when they crossed a certain finish line, for example, a promotion, a net worth of one million dollars, or finishing a marathon, they would find that which had eluded them their entire life: happiness, self-esteem, love and respect from others, the list goes on. Yet, in every case, when they crossed the finish line, they didn't find what they expected to find. Even more frustrating was the fact that others seemed to; everyone else seemed so happy and fulfilled.

So, they came to the conclusion that they simply didn't choose a finish line that was far enough away. They then recalibrated their goals in the belief that what they were looking for was out there, just farther than they thought. They moved the finish line higher up the corporate ladder, a greater net worth, or a longer distance.

The end result was a vicious cycle of hope, effort, disappointment, and recalibration, ad nauseam, ad infinitum, ad absurdium. Until, it finally hit them (hopefully) that they were looking in the wrong places. That's when they came to me (or sought out some other means of discovery; there are many roads to Rome).

As I indicated in the title of this post, the reason why these well-intentioned, though misguided, attempts at happiness are futile is because happiness can't be found at the finish line.

After finishing my two Ironmans, I might very well have moved on to ultrarunning (distances up to 100 miles or more), Ultramans (multi-day competitions comprised of hundreds of miles of swimming, biking, and running), or, God forbid, 'mudders' (events that combine endurance and obstacle courses). Except something truly revelatory happened that broke me away from that hopeless trajectory I had been on for so long: I fell in love.

I had finally found that thing that had been evading me for so long and it felt like nothing I had ever experienced before. What I felt wasn't what I had thought I would feel. The emotion wasn't exciting or stimulating or overwhelming. Rather, what I felt was a certain peace, a particular absence of angst, a...completeness.

That woman with whom I fell in love became my wife and we had two daughters together. And that feeling I had increased in volume and intensity and has endured for years.

Another quite telling change occurred in me that coincided with this awakening. The competitiveness that had driven me throughout my life diminished. I simply lost my desire (or was it need?) to compete. I still have big goals in my career and I still work hard. My career still provides me with immense meaning and satisfaction. I still run and bike from which I have fun, gain fitness, and experience healthy escape. But that pressing need to cross that metaphorical or literal finish line is no longer there. And a deep and lasting sense of happiness is there.

Of course, love isn't the only way to find this feeling we all seek. Happiness can come, for example, from expressing your passions or giving to others. But the first step in this journey is realizing that you won't find what you're looking for at the finish line.