"You'll never get a date now."

It was 1989, and I'd just told a former boyfriend that I was taking a break from my fundraising consulting practice to become the development director at Chicago House, a residential program for people living with AIDS. He was right: Nothing ruined the evening like telling a guy where I worked.

It was an odd time to be single. I'd been knowledgeable about AIDS almost since the beginning. There was no question in my mind that everyone was at risk. When I slept with a man, we were using a condom, no exceptions. That was not a decision that was greeted with enthusiasm, even by men I knew had had dozens of partners. Straight men just didn't believe they were at risk. 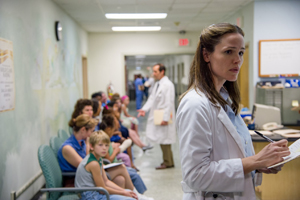 So when I saw Dallas Buyers Club, I felt relieved -- OK, vindicated. Finally, almost 30 years later, we have the story of Ron Woodroof, a straight man with AIDS. He wasn't a hemophiliac like Ryan White, or an IV drug user. He wasn't even a very nice person. But he was infected through heterosexual, unprotected sex. I wanted to call up those men and say, "See? That could've been you."

"Why do you want to do that?" friends would ask. I'd had gay friends as long as I could remember; I'd dated a few too. Why? It was the bigotry and discrimination that targeted a group of people that included my friends. It was because AIDS was devastating to the theater community, claiming so many talented men and women I'd worked with and admired from afar. And I was just pissed off.

The fact that I was straight and female was an advantage at times. I could do corporate events and meet with people who were open to giving money as long as they didn't have to actually come into contact with anyone HIV-positive (i.e., gay men). I wanted to smack them, but I wanted their donations more.

I was good at my job: I could raise $1 million a year when it was real money. I saw other straight women volunteering and attending fundraising events. Their interior designer or stylist had died, or maybe a nephew or a son. Their grief drove them, just as it drove the gay men who started AIDS-service organizations at their kitchen tables because no one else would help their friends.

Other than lobbying in Washington for the first Ryan White Care Act, I was too busy raising money to deal with political issues. I watched ACT UP (AIDS Coalition to Unleash Power) from a distance. I admired their passion, though I didn't always agree with their tactics. More than once I felt they went a step too far. But at least they were doing something.

By 1994, married with a baby, I'd backed off. My priorities had shifted, and frankly, I was burned out. I kept up with the medical advances and marked World AIDS Day, but AIDS faded into the background.

Last summer I decided to break up the book I was writing into a series of small books about grieving the death of a friend; one would be about AIDS. I visited the AIDS Quilt, on display again on the Washington Mall, and spoke with some of the founders. I caught up on the current state of the epidemic, both here and abroad. I saw United in Anger and How to Survive a Plague, nodding like a bobble-head doll when I wasn't crying. By the time my book was finished in March of this year, the anger was simmering once again.

And so I found myself in the West Village, nervously walking into my first ACT UP meeting at the Gay and Lesbian Center. I was surprised to see a small group, not the overflow crowds of the early days, as depicted in the documentaries. I sat in back at first, not sure of protocol, but was quickly waved into the circle. I sat next to Jim Eigo, who mentioned that he'd be in West Hollywood later in the month for a benefit screening of How to Survive a Plague. As luck would have it, I'd be in L.A. for a conference and book signing. We met up again at the benefit, along with William Lucas Walker, who'd taken some of the most iconic photos of Peter Staley at ACT UP demonstrations. Two months later I'd meet Peter at the World Science Festival. I'd never expected to meet my heroes.

The question that lingers is: Why? Why do I now plan my trips to New York City sothat I can attend ACT UP meetings? Why do some of my friends ask why I'm posting so much on Facebook about AIDS? Why am I researching PEP and PrEP and HIV infection rates in Chicago? Why does a straight woman who's no longer single give a damn about AIDS?

That's easy: While Dallas Buyers Club is about a moment in history, AIDS is not history. What happened to Ron Woodroof can still happen to anyone, anywhere. Today.

The medical community has sold us a bill of goods: that AIDS is no longer a death sentence, that it's "like having diabetes." No one disputes the huge advances since Woodroof received his 30-day sentence. There are long-term survivors of AIDS -- some are my friends -- who are here because of medical advances that we could only dream about in 1985.

But the CDC estimates that almost one in two young gay men will be HIV-positive by the time he's 50. How is that possible? Lack of education in the schools, belief that an infection is "no big deal," denial. Those issues are not unique to the gay community, but then again, they never were.

So now I find myself confronting government bureaucrats and nonprofit executives about cuts in funding and indifference toward HIV education. Like being a writer, this is not what I imagined doing at this age. But then I never expected AIDS to still be a health crisis.

In October I was asked at an ACT UP meeting why I was there. "Because I've never been arrested, and I think I'm way overdue."