Young & Entrepreneurial is a series of articles where I've decided to interview and write about young individuals disrupting the world. By sharing the stories of these individuals, I hope to inspire youth from all over the world to follow their passions, to take the road less traveled and to disrupt the status quo. To read previous features and to stay up to date with future features, like our Facebook page here.

JJ Fliegelman was a senior at the University of Pennsylvania when he wrote his first-line of code in PennApps. Fast-forward four years later and JJ is the CTO of WayUp, a platform that connects college students with part-time, summer and entry-level job and internship opportunities. WayUp was previously named CampusJobs before the team decided to broaden their services and make the name-change. This past April, WayUp raised a $7.8 million Series A round led by General Catalyst. 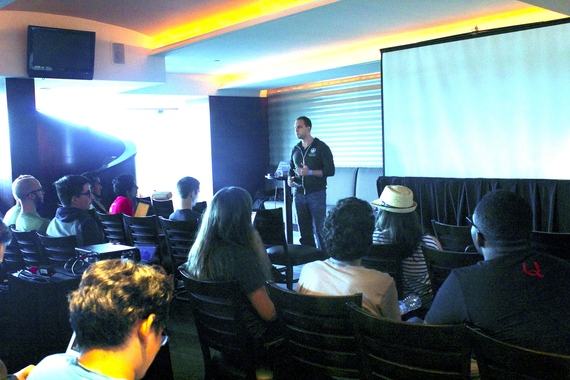 JJ giving a talk at the recent PennApps

JJ decided to drop by PennApps XII to share his story with the student hackers of how PennApps helped him get started, how it led to CampusJobs, why they changed their name to WayUp, the challenges they've faced, lessons he has learned and more.

JJ recalled how he ended up building two applications during his first PennApps, a histograph and a 'that's what she said' app. The former ended up winning an award at PennApps.

Jj shared, "I went to Penn but I didn't study programming or Computer Science at all. I was in the Huntsman program (Business at the Wharton School + International Studies). I got started at PennApps because I was pretty good friends with one of the organizers."

Joining PennApps however would lead to JJ meeting his eventual cofounder Liz Wessel. The funny thing was that Liz actually didn't attend PennApps but she decided to go through the list of participants searching for potential people to work with, and she ended up coming across JJ's profile.

JJ recalled, "She sent me this funny email, 'hey my friends told me you're the best hacker in Penn, we should totally meetup.' We met up and we decided to work on a small project at the end of the year, which was a project to help students become campus reps for companies."

It was only 3 weeks ago that JJ broke the news to Liz that he wasn't the best hacker. But 4 years ago, that didn't really matter.

JJ shared, "You don't really need to know anything to get started. Liz just started getting companies on board. We build the website in 4 weeks with Python and it was awesome. It was built like shit, looked like shit, got errors all the time, did almost nothing but at the end of the day, all it had to do was have students sign up and fill out a profile and get businesses to sign up and fill out a profile, and let students search for the businesses." 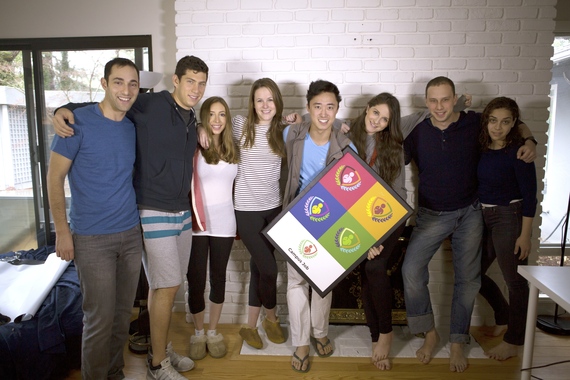 The team back when they were still named CampusJobs

Liz and JJ launched the site in December before JJ graduated and decided to travel the world while taking on freelance projects to help him build his coding skills.

During this time, Liz was still at Penn and she would call companies, asking them if they needed campus reps. She would then enter CampusJobs in the Pennvention competition, where they would win the second prize of $1000. However, Liz and JJ would decide to leave the site on the side and do their own things.

After travelling the world and building his technical skills, JJ decided to join the business and technology department of McKinsey while Liz went on to work in Google.

JJ shared, "Two years sitting there and not doing a lot but CampusJob kept growing and growing. We had thousands of students signing up and we had big businesses signing up. While Liz was in India, I was taking all the class."

Since JJ was still in Mckinsey at that time, he would have to leave his team meetings every now and then to go to the bathroom and answers calls with potential companies for CampusJobs. He shared, "I would be in the bathroom for an hour talking to big companies like Amazon on how to run a campus rep program."

This is when he realized that CampusJobs might just have more potential then they initially thought. He shared, "We had these really big companies calling us just because we had this tiny website that barely worked." It made JJ think about the possibilities if they decided to do it fulltime.

At the same time, Liz's experience working in Google India taught her how to think big.

JJ shared, "So if we were going to quit our jobs, we had to do something big so we brainstormed and realized that the campus red job was only one part of the problem, and we thought that there's no way for students to find part-time jobs in schools."

Liz and JJ believed that with the Internet, there must be a better way for students to find part-time jobs aside from the usual career fair, friend referral and Craiglist. JJ quit Mckinsey and Liz quit Google and the adventure started. Two weeks later and they had their prototype, and they managed to raise $1M in seed funding, with Box Group leading the investment. 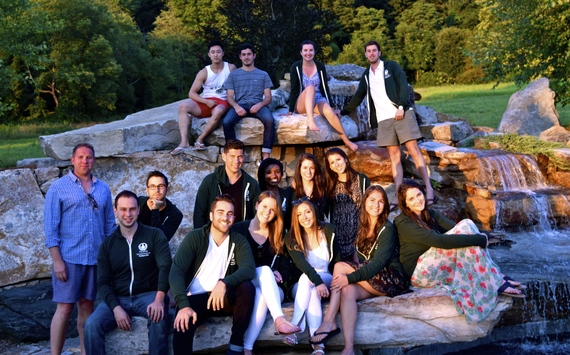 The WayUp Team has grown quite a bit since they started

Fake It Till You Make It

JJ recalls how in those two weeks, Liz would meet with VCs and get feedback like 'Your site is really cool but you should also have a profile for students and a search button'. Liz would then reply, "Awesome. We totally have that. It just hasn't been pushed yet."

This would be followed by Liz calling JJ and saying, "JJ, you have to build this right now." JJ shared, "I didn't sleep in the weekend and I would basically have my own hackathon and three days later we had the student profiles and search button."

Liz and JJ would then recruit their friend Nikki Schlecker who would become the Head of Student Marketing at WayUp. They then got to work.

JJ shared, "I was programming. Liz was putting up fliers and cold-calling businesses to get them on the website and Nicky was creepily messaging every student and telling them to become campus reps to the point that we were in every single class Facebook group."

He added, "I remember the day it was really working was when we didn't need to message students anymore. One day, all of the sudden, we were hiring every single of our campus reps through CampusJobs. We hired a sales manager through Craiglist and we were off and running."

CampusJobs would then be invited to join Y Combinator (YC) but the team felt like they were too far along from the early stage process and that they had revenue already from Day 1. The application deadline would pass but Y Combinator would reach out to CampusJobs and ask them to consider applying.

JJ shared, "We didn't know what to do so we met with our biggest mentors David and Adam from Tech Stars. And they told us, 'You guys should do it. At the very least, you will have over 600 customers from their previous startup companies. When the founders of TechStars tell you do to Y Combinator, you listen so that's what we did."

At this point, CampusJobs had a team of four and they needed to hire more people to accelerate their growth as they entered Y Combinator.

JJ shared, "We went to YC for 3 months and the whole team was just seated, building the website, talking to users and onboarding campus reps. By the end, we were in every singe school in the country and we finished YC raising our Series A which was $8M."

The team has now grown to 20 people and they are headquartered in New York. They also recently renamed themselves as WayUp after realizing that they don't just help students get campus jobs anymore, they help students with the whole career search process. 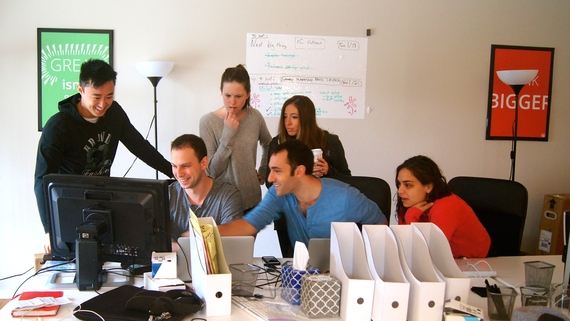 Just another day in the office

JJ shared to us the importance of hustling for your startup to survive and grow. He shared how they didn't spend any money on marketing and advertising during the early days of WayUp.

Most of the money WayUP has raised has been spent on salary and office space. Why not just bootstrap the business then?

JJ shared, "I think its very much dependent on your business and the scale. I look at raising money based on mentorship. We were lucky that we had a lot of people offering us money. The number one thing that helped us was the mentorship because we had investors who were willing to help us in every step of the way."

Admittedly, JJ and the rest of the WayUp team have faced their own fair share of challenges and sorrow moments but they've overcome all of these roadblocks so far by having a great attitude and just working harder.

JJ and the rest of the WayUp team hope to own everything student employment related in the US. JJ hopes that WayUp can onboard a million students on their platform by the end of this year, with a goal of really filling every part of the employment gap for students in the US.

Check out this music video that the WayUp team filmed a few months back: