Young and Entrepreneurial is a series of articles where I've decided to interview and write about young individuals disrupting the world, whether it's through entrepreneurship, non-profit work, intrapreneurship or singing, dancing, writing or by just doing something innovative that impacts the lives of many people. These young individuals use their entrepreneurial mindset to get things done. By sharing the stories of these individuals, I hope to inspire youth from all over the world to follow their passions, to take the road less travelled and to disrupt the status quo. This is the 14th post in the Young and Entrepreneurial Series. To read previous features and to stay up to date with future features, like our Facebook page here.

Millions of students have visited the Study Notes website to find reviewers for their AP exams, answer practice questions and go through college essays that were written by students who have made it to their dream schools. Back when I was applying to college, I was one of those students who frequented Study Notes to get some inspiration for my college admissions essay.

What many people don't know is the story of Study Notes and how it was started by then high school student Feross Aboukhadijeh because he wanted to build something cool. The funny thing is that I would come across Feross website again when I was researching on how to get into schools like Stanford. As I read more of his blogposts, I got more and more inspired by the projects Feross had worked on, even getting a job offer by the Youtube CEO for his hit 3 hour project Youtube Instant. 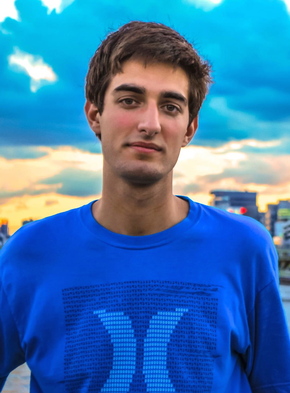 Given how much of an impact Study Notes had in my life and how I've been recommending it to all the younger students I mentor who want to study in colleges in the US, I knew that I had to feature Feross and learn more about his story. A few emailing back and forth for months, and I was finally able to get on a Skype call with Feross, and wow was I blown away by the journey of this guy and the passion he had for creating things that people would use.

The very first project of Feross started when he was beginning to learn the basics of HTML, CSS and Javascript because he had decided that he wanted to have a website. After reading countless of online resources, Feross was able to make a little website called, "Feross's website." This was followed by Feross's fascination for flash videos.

Feross shared with me, "When I was a freshman in high school, this was before Youtube was around, I was really into those flash video websites. These websites were sites were you could go and watch viral flash videos. I thought these were so cool so I wanted to make website where I could put all my favorite videos."

This is where Free The Flash was born. Feross would blatantly just copy all his favorite videos and games into the site. It would end up becoming pretty popular, and his high school friends would use the site to message each other. Then it suddenly started to grow organically. Feross gave me a shrug, unsure himself how it just suddenly grew.

Feross shared, "People started talking about the website in other forums. It was my first experience with the power of the Internet." He added, "Best year was in 2006. I still remember the amount of visitors I got. I got 600,000 unique visitors in 2006. I had like 3M page views in 2006. It was a pretty big number for a high school kid. I never wanted to do anything else."

From Free the Flash to Study Notes

After playing around with Free the Flash during his freshman year, Feross wanted to venture and look for other cool projects he could work on. He expounded, "I wanted to share my AP notes online. I just took the notes I was taking in class for AP US History, AP Gov and AP English. I called it Study Notes and then goal was to share these notes with people. Why not post them online and see what happens."

Feross's plan was to all the notes from all the AP Classes then monetize the website through ads. He applied to Google Adsense and started making a little bit of money. Feross shared, "I just had the initial inspiration for it and put it out there. I got interested in other things and just let the site sit there but slowly on its own, the site got more and more popular."

Teachers found Feross's site and started sharing it to their students. Because of this, the site started to gain trust and its page rank shot up. Feross said, "I was just a guy who decided to post my stuff online and teachers suddenly start assigning them to their students. So they would link to the site and all these .edu sites linking to Study Notes made Google think the site was legit."

Again, Feross just wanted to make something cool that people would use yet it's amazing how Feross's work has reached all the way to the Philippines. With the Internet, you just never know how far your work can reach.

While initially Feross just programmed for the sake of building products and shipping them to as many people as possible, his experience in the Computer Science program of Stanford would show him the intricacies of the field and help him understand how everything was built. Feross really enjoys teaching and went on to become a teaching assistant for multiple Stanford Computer Science Classes. 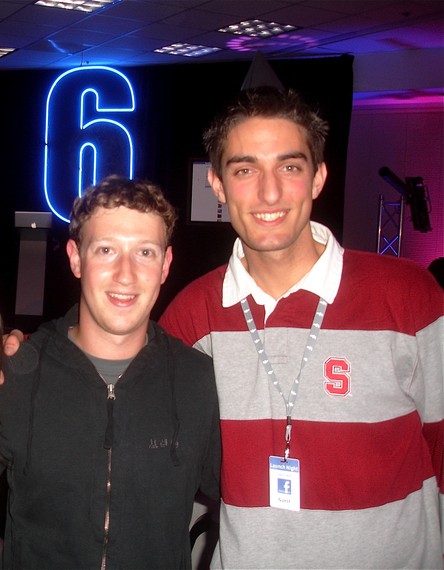 At the same time, Feross recalls his Facebook internship the summer after his sophomore year as one of the best jobs he ever got. Feross was place on the Facebook Groups team when it was still at its infancy. Feross would quickly find out that they were revamping the feature and would be working with Mark Zuckerberg closely.

He shared, "Aside from the project managers, it was really just 3 engineers and two interns. We were talking about ideas and we would have weekly meetings with Mark Zuckerberg. He would respond to my comments and he knew my name, that's so crazy."

While interning at Facebook, Feross would continue to work on side coding projects. Then, one day, Google instant came out, and Feross was challenged by one of his friends to create a version for Youtube. He accepted and told his friend that he could do it in an hour.

Feross explained, "I stupidly made my way through it. It was the most horrible code I've ever written but it worked. Youtube Instant went viral overnight. Reporters were talking to me. (Then Youtube CEO) Chad Hurley tweeted a job offer to me. All this stuff happened and it was completely out of control."

Youtube Instant became an overnight viral hit and Feross got email after email from different press reporters. He shared his realization, "Lesson in there, you don't need to know what you're doing, just do a lot of things put it out there and see what happens. If you do it enough times, you will eventually succeed."

After interning in Facebook, Feross would go on to intern at Quora before his senior year. While most students decided to recruit and find full time jobs, Feross decided that he needed to take time off after college. This was when Feross found the time to revamp Study Notes and also work on some interesting side projects--when Feross talks about side projects, it means projects that get acquired by Yahoo. 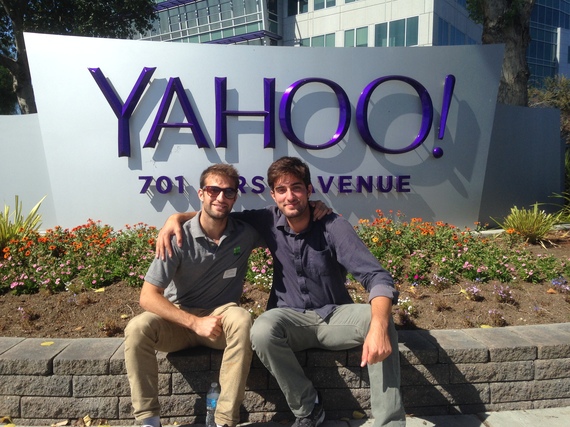 Feross had always been interested in understanding how systems worked and started playing around and hacking things. This hacking and playing around eventually led to Feross creating PeerCDN, a next-generation CDN powered by WebRTC for efficient peer-to-peer content delivery, reducing bandwidth costs by up to 90% was born.

A few months later, Yahoo would acquire PeerCDN, and Feross and the rest of the PeerCDN team ended up joining the Yahoo engineering team. Feross shared, "We worked on making their video player faster and more reliable. I also worked on a music product for Yahoo. But I think that working at large companies is a very different experience than working for a startup or starting your own company."

With this, Feross decided to leave Yahoo after a year and is currently unemployed. Well, sort of. He shared, "I want to focus on Study Notes. I want to make better study tools for students. Students can learn a lot better and faster; I want to explore making students and teachers lives easier."

He added, "Eventually, I'll probably start another company. Startups are our generation's vehicle for social change. Companies are a really effective way to create change. Where everyone is invested in the idea is a really good way to organize a group of people and do stuff and change the world in a meaningful way. " 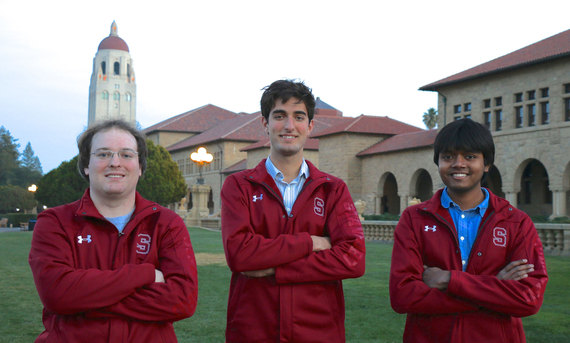 "It's okay to not know what you're doing and just do stuff anyway. Here's the thing, people are worried that they will be judged if they do something bad. The way the world works is that if you work on a project and it turns out to be a bad idea and the product sucks, and no one wants what you want, then what actually happens is that no one talks about it. Your failure goes unnoticed. People don't want to talk about things that suck. They just move on."

In terms of learning how to code and build things, Feross compared programming to sports. He explained, "There are no secrets to being good. All you need to be a good runner is to run a lot. You get better at the things you spend time doing. You just do it a lot. When it comes to programming, spend time a lot to do things. Do it a lot. You have to have an idea of what you want to do. Have an idea in mind of what you want to build and go and try to figure out all the things you need to do rather than sit down with a book and read it from front to back."

*This is the 14th post in the Young and Entrepreneurial Series. To read previous features and to stay up to date with future features, like our Facebook page here and sign up for our newsletter here. If you enjoyed this article, I would really appreciate it if you could share it to your friends as well.

David Ongchoco is a student entrepreneur and avid storyteller from the Philippines studying at the University of Pennsylvania majoring in what he likes to call, LIFE. He is currently working on expanding his nonprofit organization YouthHack . It's David's goal to make an impact in the lives of as many people possible while constantly learning new things every single day. David can be reached at david.ongchoco@gmail.com