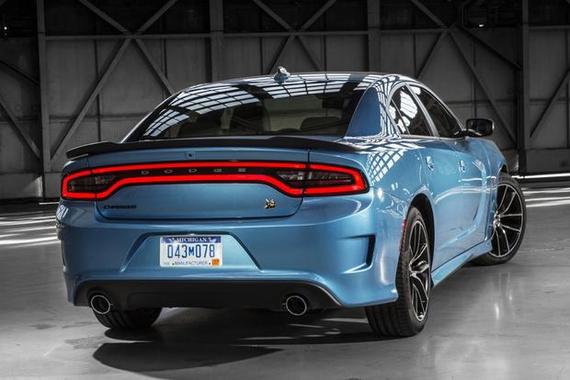 I'm partly to blame for the "No Cruising" ordinance Sacramento, California, enacted in 1988. I was reminded of this as soon as I fired up the 2015 Dodge Charger R/T. There's something about the sound of the engine and the feel of the car that instantly transported me back to Northern California in the 1980s. This time around it was the Charger R/T Scat Pack that was bound to get me in trouble.

In Dodge terms, the Scat Pack means cars that belong to a certain very speedy club. Think of it as the Rat Pack or even Brat Pack for muscle cars. Dodge's Scat Pack cars are a little quicker than the average Dodge thanks to more powerful engines, upgraded suspension and improved brakes.

The Lure of J Street
As a kid, when I wanted to go to a big city, Sacramento was it. I grew up in Roseville, California, a small town just north of Sacramento. In the 1980s, the population of Roseville was just under 50,000. It always seemed to me, and a lot of other kids, that there just wasn't much to do. Go to the lake? Done it. Baskin Robbins? Boring. Straw Hat Pizza? Only on Fridays after a home football game and always with the underlying hope of "running into" Lisa.

Young, bored and freshly licensed to drive, we'd head to J Street in downtown Sacramento. The common Friday night greeting was "You guys going to J Street?" Truth is, it wasn't really a question at all, but more of a greeting that pre-supposed the answer. It was kinda like the modern-day fist bump with an implied "See you there."

Back then, our cars were as varied as our futures would become. I recall four cars and one bike: a 1981 Nissan pickup, a 1973 Dodge Charger with a 383, my 1964 Buick Skylark and one Honda CB900. I think one guy even had an old Triumph GT6 -- in Roseville, this was essentially an exotic car. In terms of real performance, the modern Charger R/T Scat Pack is 100 times better, quicker, safer and cooler than any of the cars we had.

Pure Muscle
With a 6.4-liter V8 and 485 horsepower, the new Dodge Charger is such a pure muscle car; you can't help but love it. Dodge didn't get distracted by trying to make this version of the Charger ultra luxurious or pretending it's green with annoying features like auto-stop, where the car automatically shuts off if you're stopped at, say, a stop light. The Charger R/T sticks to the formula that made it great many years ago, and that's really its big win here in 2015.

Back in high school and college, we built or repaired those old cars ourselves. Beefed up, jacked up and with every dime we earned spent on wheels and exhaust they offered a pure driving experience. That's exactly where the appeal of the new Charger lies. Lay on the gas in the new Charger and it's like you can feel the thousands of explosions happening each minute as the car lunges forward. While most modern cars seek to remove the driver from the harsh mechanical realities of what's happening under the hood, the Charger immerses you in that world and does so in a very gratifying way. It's a new car that offers the old feel many of us miss.

But the Charger R/T Scat Pack is not crude. It still feels well screwed together and is tight and quiet in all the right ways. Something I can't say about the old those American cars we used to drive.

It Just Works
Dodge's formula for the Charger R/T works. Four doors or not, the Dodge Charger R/T Scat Pack is a pure performance car. The kind of car that brings a smile to your face and compels you to rummage through stacks of Rubbermaid containers looking for your cassette copy of Van Halen's "Fair Warning." Sorry, no cassette player in the Charger, but stomp the gas pedal and you get plenty of tire squeal that's on par with David Lee Roth in his prime.

In a way, the Dodge Uconnect system deviates from the Charger's otherwise pure muscle car mission, but Uconnect is a more of a tool that's there when you want it and happy to stay out of the way otherwise. I challenge anyone to find an easier to use system right out of the box. It is one of the best in-car tech systems around and gives the Charger a bit of legitimacy in world that's long forgotten drag strips, muscle cars and Van Halen.

And that's really the sweet trick Dodge has pulled with this car. It could be an anachronism, a relic forever bound to the past and pointless hard-rock analogies. However, the Charger stacks up well in today's automotive landscape. It's well-built, properly aggressive and modern looking with just the right level of tech. Instead of feeling like a dinosaur, it feels more like what, in its heart, it really is -- a powerful, modern muscle car that somehow manages to be relevant today but keeps you longing for just one last high-school era cruise night with Lisa along for the ride.