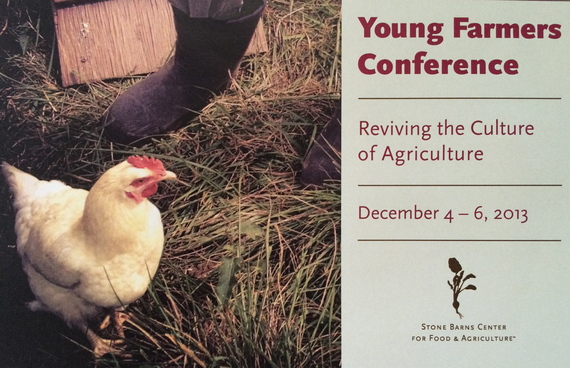 The face of farming is changing, both in the profiles of new farmers and in their perceived image. With rising social stature, some say the celebrity farmer will soon outshine the celebrity chef.

Perceptions aside, from December 4 - 6, over 250 farmers converged at the Young Farmers Conference to discuss the tools of their trade. Hosted by the generous Stone Barns Center 30 minutes north of New York City, many of the high-energy, well-educated attendees have given up on mainstream jobs, willing to take a chance on a risky business they believe is crucial for our health and habitat. 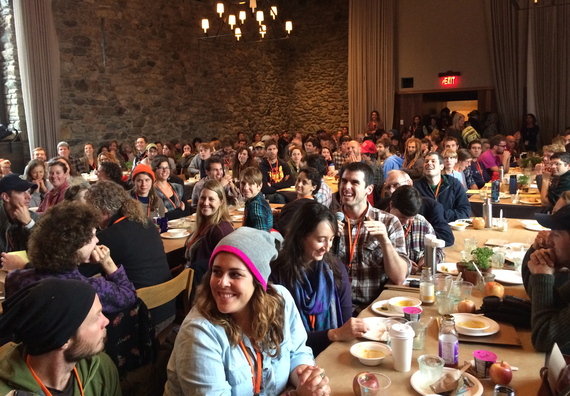 The conference offered over 60 farm-related seminars given by an array of presenters from around the country, some crusty, some shy, but all founts of knowledge in their specialties. For anyone interested in the manifold considerations of today's farming, this is the place for a crash course in subjects from Soil Science to Food Law, from Pest Management to Maple Sugaring. For a rookie like me, it was a fascinating and instructive 48 hours, fueled at mealtime by the delectable kitchen of Dan Barber of the Blue Hill restauran t-- what better schooling than this? 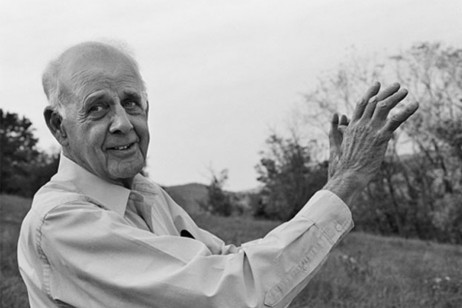 Keynote speaker, farmer and writer Wendell Berry (The Unsettling of America), gave a moving address that was both a celebration of living in the natural world and a eulogy for a way of life that no longer exists. He talked nostalgically about the loss of intangibles such as the exchange of work between neighbors who helped each other with no monetary reckoning, when the credo was, "Nobody's done until everybody's done." Berry was full of memorable aphorisms like: "Wild creatures in the habitat now are the uncontrolled industrialists." "Line fence to line fence, it's corn and soy beans. It's like being invaded by some biblical plague." Along with his co-presenter daughter, Mary Berry, they make eight generations working the family farm in Kentucky. 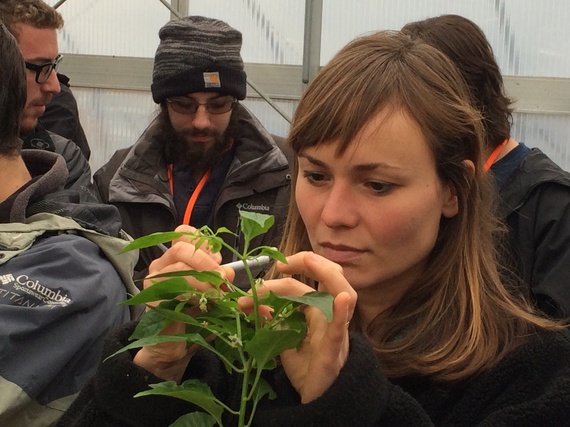 In our DIY era, as a cook or consumer, have you ever wanted to tweak a vegetable? Have you longed for a rib-less acorn squash that's easier to peel? The Plant Breeding workshop demonstrated a method for combining particular traits from different plants through cross breeding, achieved through hand pollination. This dissection of plant parts took place in the greenhouse, with the tweezers, by Michael Mazourek. Along with Jack Algiere of Stone Barns, the Cornell plant geneticist demonstrated how to open the seeds of one plant and steal a bit of pollen, then pull back the petals of another plant and douse the pistil.

Although it takes about eight generations to arrive at a variety with reliable, hybrid vigor, Mazourek has successfully breed unique strains of plants specifically for chefs, opening the door to a whole new realm of innovation -- chefs are dreaming up all sorts of variations on fruits and vegetables. Mazourek likens a restaurant to a lab for organic produce. One current (and ambitious) project is Honeynut squash, a rich and creamy cross of buttercup and butternut squash. 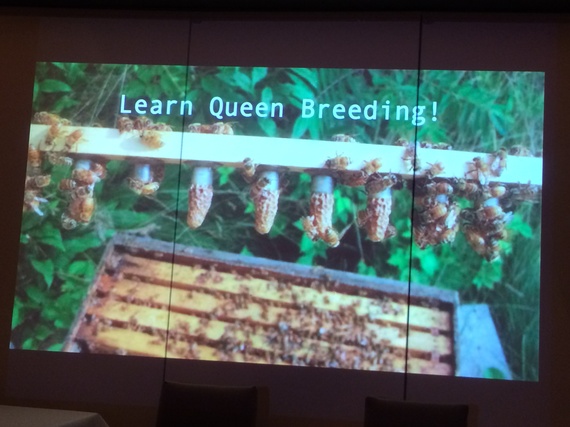 The bee world in its many manifestations was addressed by Megan Paska, author 'The Rooftop Beekeeper'. Paska advocates taking a more hands-off approach to bee keeping, which sounds like good advice to me. She spoke to the remarkable hypersensitivity of bees. For instance, southern bees don't take well to the northern climate (I have a friend from Charleston who feels the same.) Hers take quilting to ward off the night chill, and bolstering with insulating hay bales. Illustrating how attuned bees are to external conditions, several of the local beekeepers in the class reported that their bees absconded a few days before super storm Sandy, leaving nothing but an empty hive.

While bee colonies are hierarchical, their society allows for democratic ousting. If the worker bees feel their queen is faltering, they grow another one by feeding larvae with royal jelly. This morphs into a new ruling queen, leaving the old queen to take her lackeys and go (this seems a handy political option). 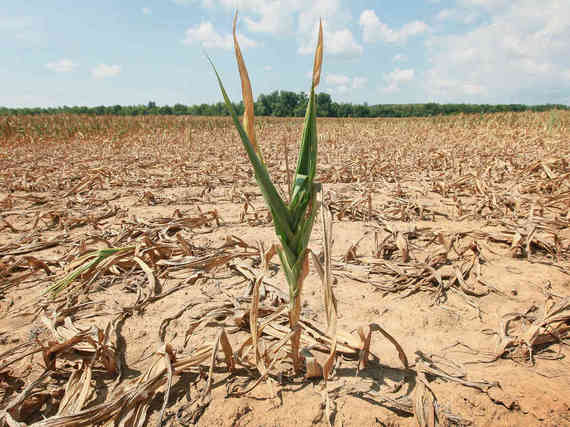 Along with the dangers inherent in the use of GMOs and pesticides by agri-business, the reality of climate change was a thread of concern throughout the conference. Mike Hoffman, an Entomologist and Director of the Cornell Agricultural Experiment Station, ran a seminar geared at adaptive farming, beginning with a slide, 'Better a cruel truth than a comfortable delusion- Edward Abbey'. Prolonged drought, severe flooding and rising temperatures brought on by greenhouse gasses will require adjustments such as shifting planting dates and fending off new pests. A New Jersey farmer wants to know if he can plan on raising mangos and bananas. Hoffman predicts that when food shortages arrive, people will be mobilized to effect change. Meanwhile, he supports a carbon tax to discourage the further buildup of CO2.

The hazards and benefits of raw milk production were discussed by Tim Wightman, a pragmatic Vermont dairy farmer. He points out that raw milk is intended to be consumed teat to mouth, not bottled up and trucked hundreds of miles for days before consumption. Wightman is wary of the state of the soil, as post-war farming methods have depleted it of minerals and microbes while increasing pathogens. Linking it directly to the health of the animals and the quality of the milk, Wightman advises, "Fix the soil, fix the health". 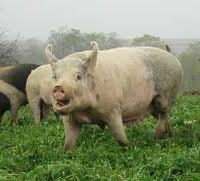 A surprising consideration that will please animal rights folks was raised by Tom Frantzen in his seminar on Sustainable Hog Production. He says humane concerns must be considered. Hogs can be carnivores, even cannibals; if they don't have enough protein in their diet they will eat each other. Frantzen keeps his hogs happy in deep-bedded pens with open doors onto fields, which goes a long way towards reducing aggression. He was enthusiastic about a new type of electric fencing that is highly visible and deliveries a quick shock instead of a sustained one. He says pigs have poor eyesight but good memories -- one zap is all they need.

Several legislators spoke, offering upbeat reports from Washington D.C. Krysta Harden, raised in a family of Georgia peanut farmers and now Deputy Secretary of the US Department of Agriculture, encouraged applying for existing loans, such as one for $35,000 earmarked to jump-start new farmers.

Congresswoman Chellie Pingree of Maine dated the Big Ag business to the mandate of Earl Butz of the Nixon Administration: 'Get big or get out'. With her two loves of farming and politics, Pingree is perfectly positioned to advocate for the stalled Farm Bill. She encouraged people to pursue passions for farming, saying her summer farm stand cannot keep up with the demand for organic vegetables. She also urged getting involved with representatives, locally and federally, recommending the Food Policy Action website that displays current bills and legislators. "The USDA is full of people who want to listen. Policy makers are responsive -- make your voice heard. The governmental bureaucracy can move mountains."

While many challenges were raised, much encouragement was given, and it's clear there are plenty of people with a passion for growing healthy food. The relationship between farmers and consumers is strengthening, and portends an enriched cornucopia for everyone. We all have to eat, so let's eat well. In the words of several presenters: Support your land grant college. Support your local green market. 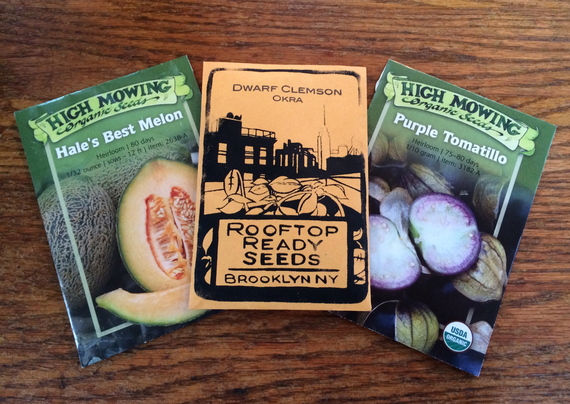 In the reception lobby, a seed exchange 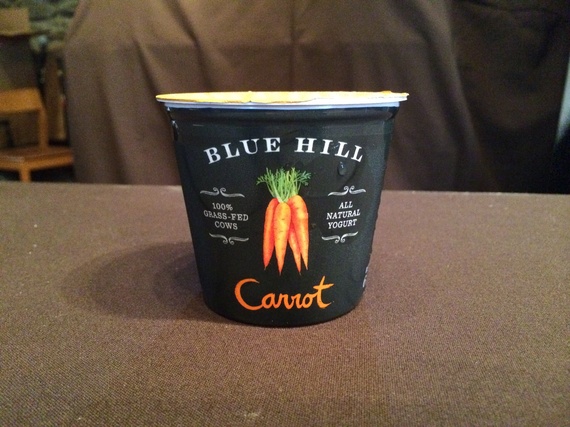 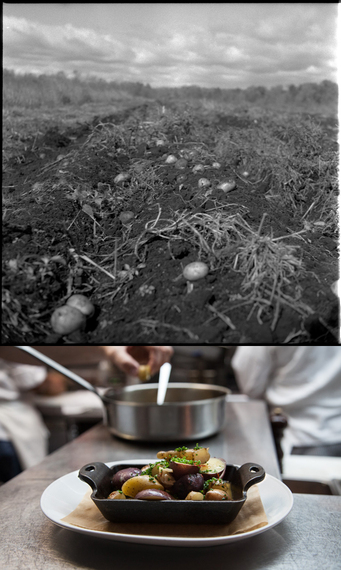 Field to Fork potatoes from the black dirt of Rogowski Farm