When it comes to equal pay, women are at a disadvantage to men from the minute they start working -- even when they have the same education.

The average hourly wages of young women are lower than those of their male counterparts just after graduation from either high school or college, according to a new study by the Economic Policy Institute, a think tank focused on low-wage workers.

For high-school graduates aged 17 to 20, women make about $1 an hour less, on average, than men, a gap that has held steady since at least the 1990s. For college graduates aged 21 to 24, that gap has widened sharply in recent years, so that women in 2013 made nearly $4 an hour less than men, as you can see from the EPI chart below. 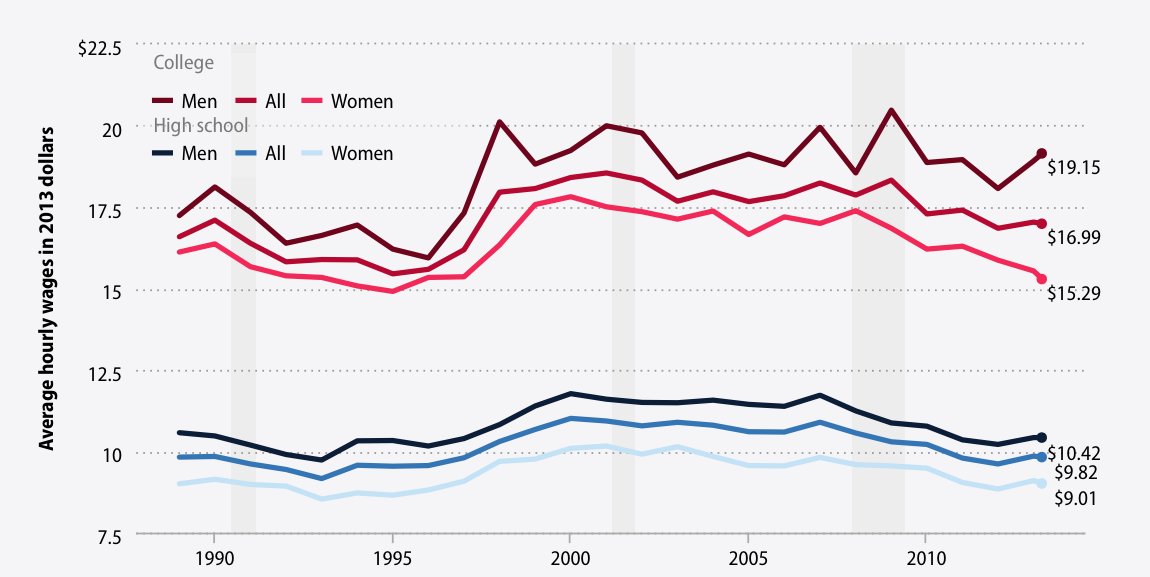 “These are all young people with the same credentials, and there’s still this gender gap,” said Heidi Sheirholz, an EPI economist and the lead author of the report.

The study joins others suggesting that women start out behind men in terms of pay even at the very start of their careers. That gap only widens as workers get older and move up the career ladder.

The EPI study shows that educational achievement makes little or no difference in closing that gap.

The study didn't account for things like number of hours worked, or the fact that women tend to end up majoring and working in lower-paying fields. These are often cited by gender-gap deniers to explain away the difference between what men and women earn. They could help explain the pay differences between men and women with the same levels of educational achievement.

On the other hand, the fact that women often end up in lower-paying fields isn't solely a matter of choice -- girls and women could face discrimination even before they start working.

“It’s a conscious choice of what you want to major in, but a hell of a lot of socialization goes into that,” Shierholz said, adding that differences in choice of college major don't explain the gap in the earnings of high-school graduates.

Still, there are some ways that gender-sorting in the labor market actually benefits women. For example, women are more likely to take jobs in fields like health and education. Though often on the lower end of the pay scale, these are typically more sheltered from economic downturns than male-dominated fields like manufacturing, Sheirholz said. As the charts from EPI show below, that means women are less likely to be unemployed during a recession.