That's what stands out when you meet the voluble 27 year-old star of the new indie thriller-romance Charlie Countryman, which opens in limited theatrical release and on VOD this Friday, November 15th. The hustling young man we've gotten to know in the Transformers and Indiana Jones movies -- the fast-talking, nebbishy tough guy with a big heart, always improvising, always on the move -- is very much the same guy in person.

Charlie Countryman premiered at Sundance earlier this year (back when it was called The Necessary Death of Charlie Countryman), where we talked to LaBeouf, co-star Evan Rachel Wood, and director Fredrik Bond at the film's press day.

Charlie Countryman takes LaBeouf in a direction familiar to anyone who remembers him playing impulsive teenager Sam Witwicky in 2007's Transformers: that of a sentimental hot-head on a hopeless quest for a girl, comedically improvising his way into and out of one scrape after another.

"It's not a humongous departure from my real life," LaBeouf said at the press day. "This is a guy who thinks with his heart, rather than his mind ... and who doesn't show a lot of caution toward consequences, which isn't far from who I am."

Charlie Countryman follows LaBeouf on a wild, hallucinogenic vision-quest through post-communist Bucharest as he pursues a world-weary femme fatale cellist named Gabi (Evan Rachel Wood), while battling over her with a pair of unhinged Euro-mobsters (Mads Mikkelsen and Til Schweiger). Infused with heart-on-your-sleeve sentimentality by director Fredrik Bond, the film is both a coming-of-age story for Charlie and a picaresque, 'everyman'-style thriller reminiscent of the novels of Eric Ambler (The Mask of Dimitrios, Journey into Fear). 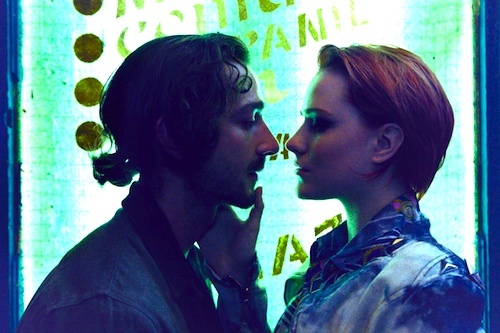  Charlie Countryman's biggest star, however, may be Bucharest itself -- which the film presents as an exotic, old world blend of high culture and low-life gangsterism, still adjusting to the post-Cold War world. LaBeouf's nocturnal adventures in Bucharest -- a darkly glamorous city that somehow seems trapped in a 1990s time warp -- often feel like an MTV version of Joseph Cotton's nighttime journeys through crime-ridden, post-War Vienna in Carol Reed's The Third Man.

LaBeouf lights up on the subject of Bucharest, gesticulating and going into one of his typical, animated riffs. "I arrived quite ignorant, you know -- I'm an ignorant American," he quips. "I haven't really done much traveling beyond my work life. I never really picked up a Romanian book, or decided to study Romanian.

"But you get there, and you hear about [former Romanian communist leader Nicolae] Ceaușescu, you get to the [Revolution] Square, you see where the blood fell, talk to these people -- you know, some people who still want communism, who are upset that it's gone -- and you don't quite understand what that's about ...

"I've heard people say that we have dated villains [in Charlie Countryman] -- that's because ... Romania is dated -- it's 10 years behind. They're still playing the 'Thong Song' in clubs," he cracks. "It's no joke, so this is part of the world of these dudes [the film's gangster villains]. It's not artificial -- this is what we ran into. 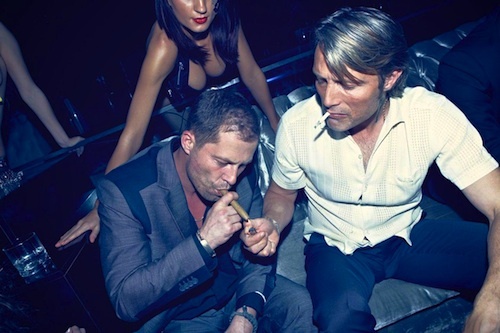 Co-star Evan Rachel Wood agrees. "Shia's right -- they're absolutely behind. It is like a time-warp when you go back there. It's 1998."

"It was really interesting to see women there, in that culture, and how they interact with the men. The women are really there for each other. You see women walking down the street holding hands. They really stick together, because I don't think it's the easiest place in the world for a woman. [Laughs.] The women ... have got this toughness about them, this strength. It's inspiring," she says.

"Romania's had a really violent past. This is just how it is. And there still is that underbelly there. And there still is crime and violence ... like there is anywhere," Wood explains. "So all of that's very real. So that's why I loved that this story is driven by love."

With its mixture of action and rough-and-tumble comedy, Charlie is certainly the kind of role LaBeouf seems most comfortable with, and the film is an effective vehicle for him. No other young actor seems so comfortable getting beaten up on screen (in Countryman, LaBeouf endures some major beat-downs from Mikkelsen, a former Bond villain), or to pursuing -- and catching -- women seemingly out of his range.

LaBeouf somehow makes it all seem natural -- just part of his 100 mph, all-in approach to his life and career.

"For me, [Charlie Countryman's screenplay] read like The Graduate with blood in his mouth," he quipped. "It was right up my alley."

[Our Q & A with LaBeouf, Wood and Bond below has been edited for length.] 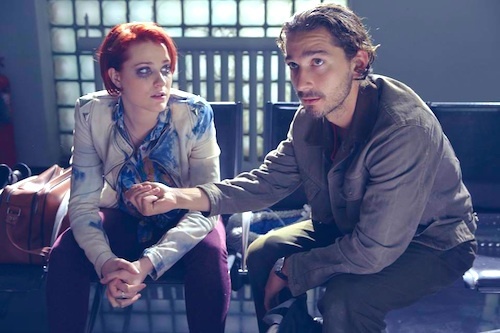 JA: "Shia, in a lot of the roles you play you seem to be running on instinct -- hoping it's all going to work out in the end. Do you pick roles because this reflects some side of your life? How biographical is this film [Charlie Countryman]?"

SL: "Oh yeah, heavy ... I mean, I've got my own wild personal history -- and that informs everything, right? For all of us, I imagine. The closer I can get to something that I can actually pull from, the easier it is for me.

"The problem with that becomes one of playing the same character over and over again. But when you get an opportunity like this, where there's a bit of a departure -- you're still in the same wheelhouse, but there's more of a departure than usual -- it just seemed like a challenge, but also a safe way to do it.

"It was also an opportunity to show strength, and vulnerability, and to have a love story that was sort of being controlled by the woman -- which I hadn't seen on screen, and I was open to that, as well."

GM: "Shia, I always really enjoy the humor you bring to your roles."

GM: "Even in the darkest scenes, you find a way to bring humor and wit and lightness -- and that, in a way, makes the darkness darker. I love that back-and-forth -- it has a quicksilver, almost hermetic quality."

GM: "Is that something you try for? I know you have a background as a stand-up comic, but tell me more about that."

SL: "I'm a pretty dark dude, but I like to laugh, too. [Laughs.] It's sort of a microcosm of what this movie is, really. There's a lot of levity involved, but it never gets cheesy because you're still punching people in the face."

JA: "Fredrik, this seems like an educational story. Charlie's basically growing up. He's going through these tough experiences to become a better man. How do you envision this couple, these two characters, after the film? Did you have an idea -- they get together, they go back to America, they become middle class? Did you have any of that thought through?"

FB: "I think that's for everybody who sees the movie to figure out. I think the end of the movie is a little bit open-ended, to a certain degree, and I think that's part of the beauty of the film -- that people get to create their own reality.

"I think that this journey that Charlie goes through, meeting these amazing characters, is something that we have in one way or another experienced in our own lives -- whether going through grief, or trying to get away from something. 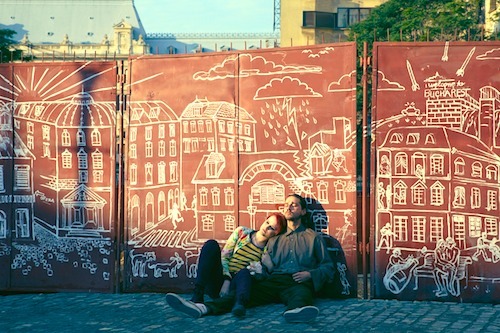 "I think the most important thing for me was that they [Charlie and Gabi] were kindred spirits. I showed them [LaBeouf and Wood] very early on a movie from 1970 called Swedish Love Story -- which is a very important movie for me, which Swedish director Roy Andersson did. I wanted the two of them to see that movie because I feel like there's just a connection between them that might not lead to something, that might just be that period, and that was the beauty of this relationship."

ERW: "Yeah, it's the contrast -- it's completely different. It's so tender, loving. It's beautiful."

FB: "It's very rare that you see a character like Charlie falling head-over-heels and pursuing. Normally, it's the other way around. And that's what's so exciting about this, that Evan was a nut to crack -- for Charlie to really pummel through, and get into her heart."

ERW: "That was even in some of the camera angles that you chose. I remember that you didn't want me to look up at first, you wanted Gabi to remain very mysterious at first -- you just see flashes of her eyes. And I think it's so powerful -- like in the beginning of the film, [the audience] slowly being let in, the way that Charlie is."

FB: "She's a flower that you slowly open up." 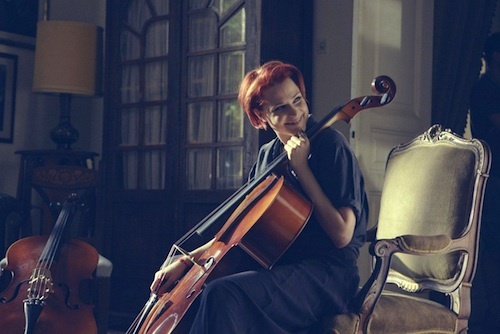 GM: "Fredrik and Shia, you brought up elsewhere that the film is like a fairy tale. It struck me that it really had the quality of a classic picaresque novel, where your hero is sort of like the picaro from Spanish literature -- he's comic, but he's also romantic. Or it's almost like a comic version of a Joseph Campbell hero's journey -- he's separated from his family, he goes to a dangerous place, he meets the fair maiden, slays the dragon, and grows up. Were you thinking of any of those things, or am I reading too much into it? [Laughs.]"

FB: "That was all in [screenwriter] Matt Drake's head. [Laughs.] He probably thought about it. You're right -- it's there -- but we didn't think about it that much."

GM: "Well, you put in on the screen, so it was enjoyable."

GM: [to Evan Rachel Wood] "What did you learn from your time working with director Catherine Hardwicke that helped, in a sense, prepare you for this role?"

ERW: "That movie [Thirteen] prepared me for always being ready. We had no time, and I was under-aged so we only had 9 hours a day to work -- so you had to be on. You had three takes to do it, sometimes one, and you just had to run and go. And it was kind of a similar feeling with this movie sometimes.

"Sometimes people warned me -- 'it's low-budget, it's going to be hand-held, we have no time' -- and I'm like, 'good.' I work best that way -- when I have no time to think, I'm just thrown in there and I have to do it. You have to bring it. So, she [Catherine Hardwicke] really helped me with that, and also to push myself as far as I could go." 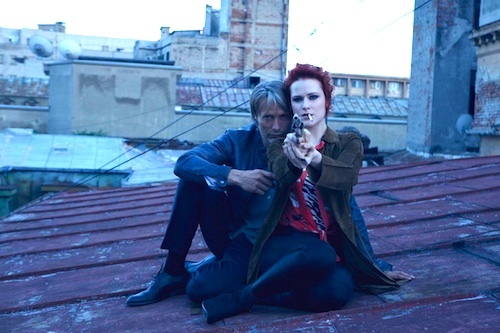 GM: "Shia, what did you learn from working with Michael Bay that helped you with this role?"

SL: "It's more intimate, this film, but the bang-bang-bang of a Michael Bay set kind of prepares you for it, you know. I've been through a lot of physical pain on a movie like a Transformers, so you get here and see that you have to hang from a wire [as LaBeouf does in one scene, upside-down and bloodied, in Charlie Countryman], it's sort of a cakewalk. I mean, it's wild while you're there, but in retrospect this was kind of an easy shoot."

GM: "And what did you learn from Steven Spielberg?"

"It's like going to the zoo and looking at a bear. You don't learn how to be a bear -- you're just like, look!" [He mimics pointing at a bear.]

SL: "They've both [Bay and Spielberg] been good to me, you know. I wouldn't have been here with this movie [Charlie Countryman], I never would've made this movie without those men. I've been blessed by them both."