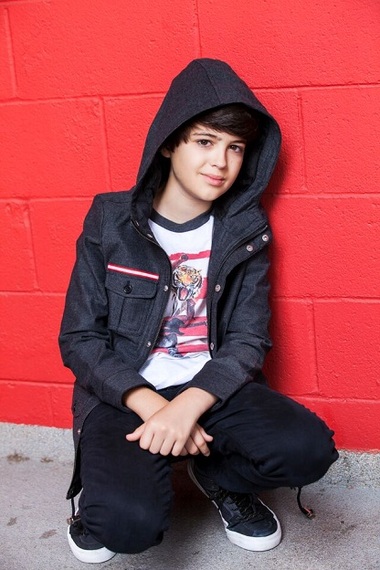 13 year old Joshua Rush is the voice of 'Toby' in Netflix's The Adventures of Puss in Boots and 'Breehn' on Cartoon Network's Clarence.
Twitter: @JoshuaRush, Instagram: @joshuarush, Website
Photo by Lesley Bryce.

With a birthday coming up on December 14th, you'd think young performer Joshua Rush would slow down. But noooooo. He's about to voice 'Bunga' in The Lion King sequel TV movie and new series, The Lion Guard.

I was like, dude! I sent you these interview questions a month ago! Can you believe Joshua had the nerve to get sick? No worries, folks! He's better now! Yay!

How'd you get into voice overs? How does it work?

I really got in to VO work naturally. I started off doing just little one-off radio spots, and I found a coach and it just exploded! I booked multiple jobs (Clarence, Puss in Boots, and Lion Guard) within weeks of each other!

It works basically like this: I come into the studio, sometimes it will be an ensemble record and I will be with other people or sometimes it's just me solo. I go into the booth after exchanging some small talk with our director Kelly and executive producer Ford. After I go in, there is a script, water, and sometimes tea waiting for me, and I read each line through a few times. Kelly will give direction, and we go through each line one at a time! Sometimes it can take up to five or six takes for one line, and each take has multiple 'reads' of a line. Basically what you will hear is one of like 15 or 20 reads of one single line, and I can have anywhere from two to 60 or even 100 lines per show!

How does your schooling work?

I go to a private school, and I find myself very lucky. It's a school for actors and filmmakers, so not a totally normal school. With VO work, the schedule is really flexible.

What do your friends think about your career?

In fourth grade, when I had just gotten back to school from filming Parental Guidance, and was out for three months, this one girl thought it was a total lie and thought that I had just gone to Disneyland for three months. Other than that, people usually know or believe me, but I try to keep a low profile for as long as I can. I go to a film school and even kept it under wraps for almost a month, when someone decided to look me up. Also, yesterday while binge watching Criminal Minds, someone recognized me. (The episode was called Outfoxed, Episode 508 [S5E8], for all your binging pleasure.) [Hey Joshua! I have no idea how to spell 'binge-ing'! - ILANA]

Have you ever had braces?

I have never had braces, but I must admit, I used to have really bad teeth, so for like two years I wore Crozats, which look like weird, bent up paperclips that fit in your mouth and are removable. Basically a retainer without the plastic part.

What are your favorite video games?

I am not much of a gamer. I have an Xbox 360, and use it pretty much exclusively for Netflix, HBO Go (I need my Veep!!!) and to play Madden 15 Owner Mode. If I had to pick, I would say my favorite video game is Civilization V, because it is just amazing. (Mongols 4 Lyfe!)

What good and bad habits do you have?

I have a tendency to forget to floss, which is just bad. Especially because I love popcorn so much!

I do, though, (starting just recently) eat a (sort of) full breakfast every morning, which I think is great. (It is a protein smoothie, but it has fiber. My secret recipe is tasty and healthy!) [What's your secret recipe for crying out loud!? - ILANA]

Who is your guardian on set?

It is usually either my dad or a babysitter. But babysitter is a pretty lame word, so I use Joshsitter.

What's the most important lesson you've learned about life?

I have learned that everyone has gold in them. I do my best to respect everyone because everyone has a little nugget of gold in them, a part of them that is great, from a janitor to a TV executive, everyone has something we can learn from them, and everyone is special in their own way.

Shout out to my Uncle Paul, who reads the Huffington Post every day! And I support GenerationOn, a charity that gets kids and teens involved in service in their communities. They're AWESOME!