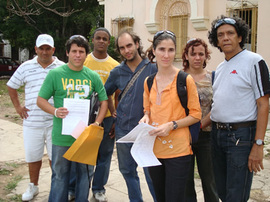 Photo: Green shirt, Edgar Lopez. Orange shirt, Yoani Sanchez
Note: Edgar Lopez is the leader of a youth pro-democracy group in Cuba. The U.S. government has issued him a political refugee visa to join his wife and family in Florida, but the Cuban government refuses to allow him to leave.

This morning, some of us who are friends of Edgar Lopez went with him to deliver his appeal to his denial of permission to leave the country. A few steps from the office of Legal Counsel is the site of the national Immigration and Emigration office. I already know the place, having been there just a year ago with a similar claim, which ended with the confirmation that I could not, "travel for the moment." Uniformed officers and quiet people hoping to have their cases revisited set the stage at this branch of the Ministry of the Interior (MININT).

The signatures collected among Cubans here and outside were handed over to the duty officer, who confirmed that they now had sixty days to reply to his request. On Friday, two Section 21 officers had "suggested" to Edgar that he should desist from presenting himself at the place where we went today. The insinuation was that if he was quiet, they would allow him to travel by August. After this young man's hunger strike, the immigration authorities couldn't--according to the anxious officers--"act under pressure," because it would seem that they had been forced to let him get on the plane.

As if it were the most common thing that we citizens would bring pressure to bear and in response the politicians would amend their actions. As if it is precisely for this that they occupy their positions, to yield--again and again--before the demands of society. Hasn't it been said already--by enough voices--that the requirement for permission to leave and enter Cuba has to be repealed? What more has to happen to stop them from hijacking this right from us?