Rachel Harris was there with her fundraising team, the St. Jude Dudes at the annual pre-race pasta dinner for St. Jude Heroes. It was held in early December, on the night before the 2015 St. Jude Memphis Marathon. Between bites of carbs, good laughs, and nervous jitters about the 26.2 miles they were set to run the following day, they listened to a mother of a St. Jude Children's Research Hospital patient eloquently give an impassioned speech about the life saving cancer treatment her son was undergoing at St. Jude. It was moving and inspirational, and was followed by another one, given by Rick Shadyac, CEO of ALSAC/St.Jude, the fundraising and awareness arm of the hospital. Little did she know, the end of Mr. Shadyac's speech was the presentation of the prestigious "Hero Among Us Award." This award is given to a St. Jude Hero, a term used to describe someone who, through a variety of fundraising efforts, raises a significant amount of money and chooses to participate in a walk or running endurance event for St. Jude. The "Hero Among Us Award" recognizes one Hero who has gone above and beyond the call, both in their fundraising efforts and their awareness efforts of the mission of St. Jude. The 2015 Hero Among Us Award went to a young woman, who when her name was called, looked around her table in shock and disbelief, then leapt up to receive her well earned recognition. That young woman was Rachel Harris. 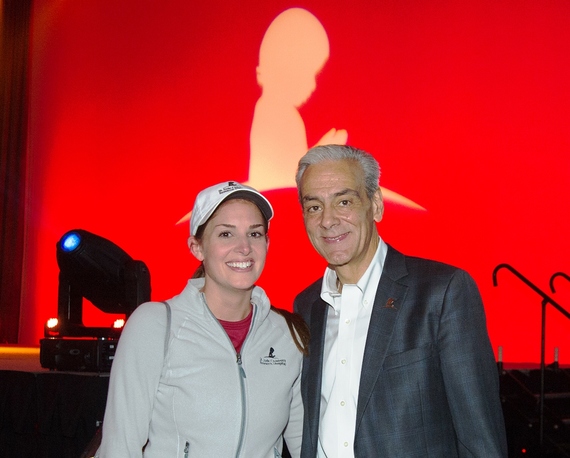 Just how did Rachel Harris go from being the collegiate philanthropy chair for the Delta Delta Delta chapter at the University of Missouri just a few years ago, to someone who has raised more than $200,000 for St. Jude Children's Research Hospital? She did it with passion, energy, and the type of giving heart we don't often see in today's young people.

"I was very involved with Tri Delta while I was at Mizzou from 2005-2009. During my time there, I headed up the annual "Frats at Bat" softball tournament for St. Jude. That is what first sparked my interest in organizing large fundraisers!" Harris said.

When Harris and her close friend Katy, also a Tri Delta, decided to run a marathon in 2012, they choose the St. Jude Memphis Marathon, because they "couldn't think of a better place for our entry fee." Though nervous about the fundraising commitment, they signed up to run as St. Jude Heroes, quickly notifying their friends and family on social media of their plans, and started soliciting donations. Harris said, "We were blown away that so many of our family members and friends had been willing to donate so quickly. The donations ranged anywhere from $10 to $25 but they continued to come in." Upon realizing many their close friends were also looking for a charity to give back to, they spontaneously organized a lemonade stand for St. Jude, raising a quick $500, and formed an official St. Jude fundraising group. Although mostly made up of young women at the time, they ironically decided to call themselves "The Dudes."

"From then, the St. Jude Dudes were born and we never looked back. We raised $10,000 that year for the Memphis Marathon." Harris has since run five full marathons, and a few half marathons for St. Jude.

In the years since, "The Dudes" have held and hosted variety of fundraising events, everything from cook-offs, to bowling tournaments, wine tastings and yoga-thons, and even the occasional pub crawl, all in an effort to keep raising money for St. Jude, a cause they find so very, very important. Harris recalls meeting a patient family at a recent Hero event. "Last year at a St. Jude Heroes event, the guest speaker was a little girl who ended up losing her battle with DIPG and her brave mother. The impact she had on us that day was more than her family ever could have ever known. We met her for such a short time but the impact she had on us in indescribable.  After that day we vowed we will never stop fundraising until we continue the mission of Danny Thomas, and that is that 'no child dies in the dawn of their life.'"

Harris says fundraising for St. Jude has been an amazing experience, and one she will not soon give up, and she is thankful to Tri Delta for introducing her to such a worthwhile cause and mission. Her and "The Dudes" will continue to recruit other young people to join their team and spread awareness of St. Jude, as well as continue to participate in running endurance events across the country, always running as St. Jude Heroes. It also remains a goal of hers to get and keep today's young people involved in St. Jude, thought many are not old enough to have any memory of Danny Thomas and the hospital's humble beginnings.

"People my age may not remember Danny Thomas for his acting career, but it is so important that every individual out there remembers Danny Thomas, the Philanthropist. A man of faith, a man of his word, a man who went to battle for the children who could not fight alone. Danny Thomas created a hospital that took the patients who had run out of every option given to them other than hope. Not only did he create a place to treat these patients, he created a groundbreaking research facility that would change overall survival rates from 20% to 80%. Danny Thomas' legacy must live on."

Melissa Fenton is a freelance writer and St. Jude Blogging and Awareness Ambassador. Find her at 4boysmother and on Facebook.