You know that old idea that women want to date older men, because they're more likely to be financially established, more mature, or both?

Not true anymore, according to data from one online dating site. Are You Interested?, owned by SNAP Interactive, collected user data from 23,959 American members ages 18 and up. The dating site has 20 million Facebook-connected users, 4 million of whom are active on a monthly basis, SNAP director of product insights Josh Fischer told The Huffington Post. Users hail from all 50 states with an average age of 48, Fischer said, and the site's ratio of male to female users is roughly 2 to 1.

Men were more likely than women to respond in general, but whether or not they responded wasn't correlated with the age of the woman sending the message. 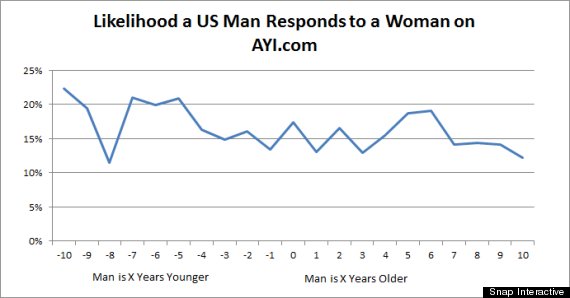 According to Fischer, data from specific age brackets -- 30-49, 50+ and even 20-29 -- showed similar patterns of women preferring younger men, although older female users were even more likely to respond to messages from younger guys.

If the numbers contradict conventional wisdom, a look around at the way people actually date suggests that they're right on the mark. As CNN pointed out in February, Hollywood and the broader celebrity sphere is full of young women dating younger men, from actress Jamie-Lynn Sigler, 31, to race car driver and model Danica Patrick, 30, to Eva Longoria, 38.

The data also make sense in light of women's financial realities. Women under 30 are out-earning young men in major metropolitan areas. Women are now the primary breadwinners in 4 out of 10 households with children. There are signs that men are increasingly interested in women who earn as much or more than they do. Since they can count on themselves, women don't need an older man for financial stability, and dating a younger one may be a way of establishing relationships where they have at least as much control as the man. In a recent story on the AYI.com data, TIME quoted Harvard psychologist Justin Lehmiller speculating that "when the woman is older, it shifts the traditional heterosexual power dynamic toward greater equality," and equality makes for happier couples.

Unfortunately for women interested in younger men, the data also showed that 42 percent of male users only consider younger women (established when they tell the site who they're looking for), limiting the pool of men who would contact an older woman in the first place.

But hey, if your inbox is full of younger dudes, go for it -- you won't be the only one. And maybe if enough women start dating younger men, if it becomes really unremarkable, people will finally stop referring to women who do as large cats. "More ladies are embracing their inner cougar," reads the first sentence of TIME's story on the AYI.com data. CNN noted that younger women who date younger men are now known as "pumas." No more of that, please.