If the last ‘tech’-related thing you did was send a message via Snapchat, it’s time to rethink what’s possible.

Whether they’re achieving nuclear fusion in a secondary school classroom or constructing a single-person submarine from drainage pipes and a recycled skylight hatch, young innovators are blowing our minds by turning their big ideas into realities.

The coolest part? Most of them aren’t even old enough to legally drink! We’ve partnered with Paramount’s Interstellar to highlight nine tech innovators under 21 who can inspire us all. 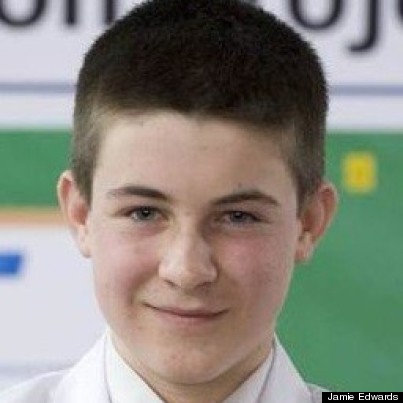 “For me, innovation is when people either find new ways of using things we already know about or create something completely new.”

Jamie Edwards has always been naturally curious but is especially fueled by a challenge. The more he heard, “You can’t do that,” the more he was inspired to accomplish something. And he did: In March 2014, at 13, Edwards became the youngest person in the world to achieve nuclear fusion, using high energy to smash two hydrogen atoms together inside a classroom at his secondary school. Currently, Edward is continuing to work on his fusor and plans to experiment with infrared technologies and natural ion sources. His long term goal? Going to college to study physics. 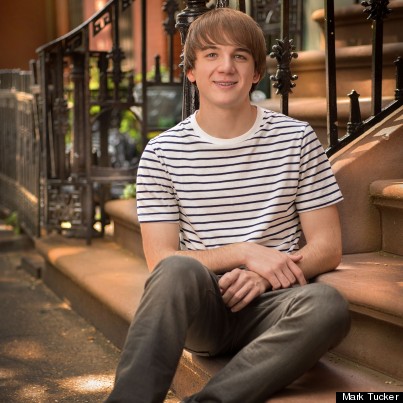 “I think innovation and creativity go hand in hand and that the edges where different fields overlap are great places to find new ways of approaching problems. Also, when people get out of their 'silos' of knowledge and look at problems in other fields through the lens of their own expertise they can bring fresh ideas to problems.”

Not every 13-year-old learns about a disease and thinks they might have a solution. But after a close family friend passed away from pancreatic cancer, Jack Andraka turned to every teen’s go-to resource to find out more: Google and Wikipedia! After discovering that one of the leading causes of cancer deaths didn’t have a quick, reliable, or inexpensive method of early detection (when the disease is most treatable), Andraka made it his prerogative to find a better way. At 15, Andraka created a cheap, effective and non-invasive early detection test for pancreatic cancer. While, admittedly, there is much work to be done before people can use it, Andraka continues to work on improvement while working on other initiatives — like an air pollution sensor, co-authoring a book and taking the SATS. 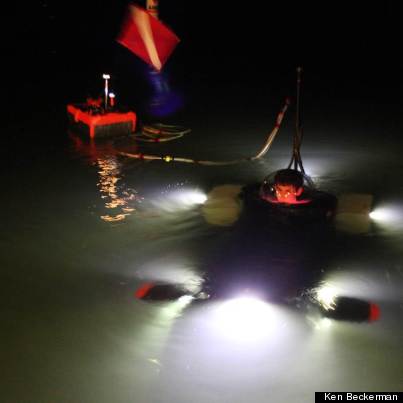 “I think to be an innovator you just have to think differently and not be held back by things that might go wrong...You can always come up with a different way to solve a problem.”

Justin Beckerman isn’t known for his bartering skills, but he negotiated a pretty decent deal with his father when he was 17: If he came up with half the money to build a personal submarine, his dad would spot him the second half. Beckerman didn’t waste his dad’s wallet. Instead, he used his passion for creation and engineering to build a homemade, single-person submersible out of an old soda machine, drainage pipes and a hatch from a recycled skylight. It took 4 months to complete before he tested it (successfully!) in a local New Jersey lake on his 18th birthday. Beckerman helped kids conduct science experiments at his childhood summer camp before entering his freshman year at Stevens Institute of Technology, where he is attempting to create a fingerprint scanner to unlock his dorm room. 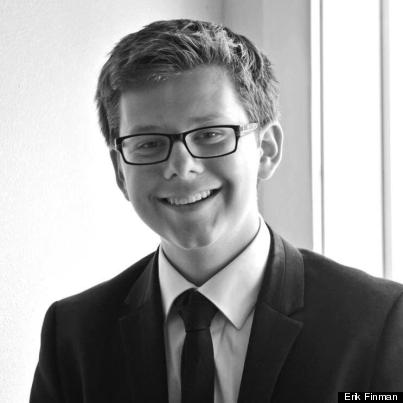 “Innovation happens when you break the rules. When people saw something as impossible, true innovators saw it as just another obstacle to conquer.”

Insider trading is usually scandalous -- but when that ‘insider’ is your brother and no illegal activity is involved, then it’s probably okay. Following the lead of his brother, 15-year-old Erik Finman invested his entire life savings (roughly $1,000) in Bitcoin, a software-based online payment system. A year and a half later, his investment was worth a pretty (virtual) penny: $100,000. Finman used his earnings to launch a video chat-based online tutoring system. Later, he started Intern For A Day, an event series where young people can work at a startup for a day and potentially get hired. Finman hopes he can inspire other individuals to pursue their passions, no matter their age. 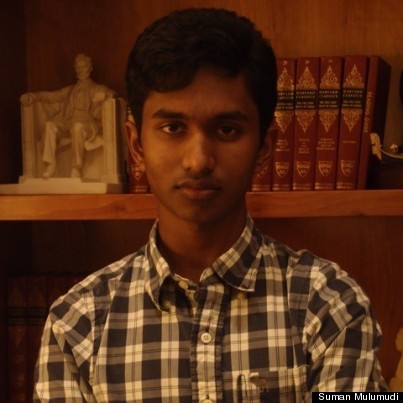 “Innovation is the process of designing and implementing messages and ideas that allow for the increased efficiency and better overall outcome of any given situation, whether that is developing a new technology or a social idea.”

Raised by medical professional parents, Suman Mulumudi was exposed to many medical technologies at a very young age. What puzzled him, though, was that the stethoscope had not changed in nearly 200 years — a rarity at a time when technologies are consistently updated. Using a natural platform (a smartphone!), Mulumudi created the Steth IO, a simple and elegant solution for both consumers and medical professionals. The working stethoscope, powered by an iPhone or Android device, allows users to visualize individual heartbeats on a smartphone display and therefore make a more accurate diagnosis. Today, Mulumudi balances improving the StethIO with his position as CEO of StratoScientific … and a little thing called high school. 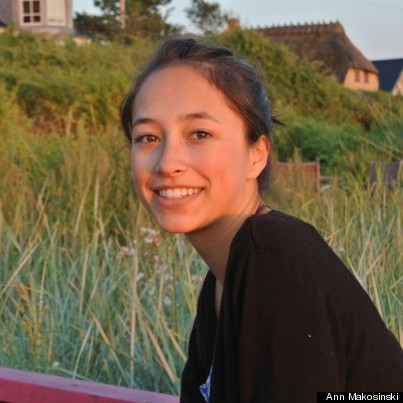 “A true innovator is someone who is always thinking of ways to improve other people’s—or even their own—situations….I enjoy inspiring others to pursue their passion.”

A self-proclaimed ‘science fair kid,’ Ann Makosinski never played with Barbies. Instead, she spent her time playing outside and taking apart old computers her father would bring home from work (though, admittedly, she never did figure out how to put them back together). After presenting a school project at a local science fair, she, “caught the science fair bug,” directing her focus toward energy harvesting. Makosinski created the ‘hollow flashlight’ — a flashlight that transforms hand heat into energy — which went on to win her age group at both the 2013 Google Science Science Fair and Intel International Science and Engineering Fair. Today, she’s concentrated on patenting and manufacturing her prototype. Oh, and getting her driver’s license! 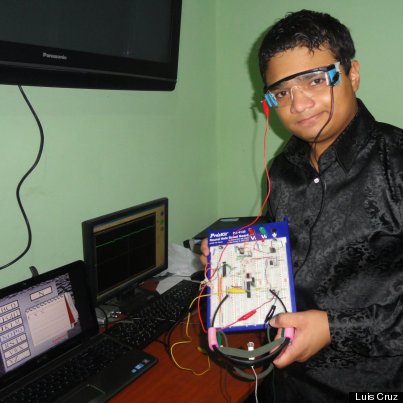 “Whenever I go back to [Honduras], I usually get invited to different schools and places to tell young people, like me, how I got started. I tell them that young people are the ones that will change the future, and try to encourage them to get more involved in technology.”

At 14, Luiz Cruz was a wannabe video game programmer, leading to a deep interest in computer science and different programming languages. After moving from Honduras to Colorado Springs, Colorado, to finish high school, Cruz decided to create a video game that could be controlled not by a console, but by a person’s eyes. Cruz was successful in his quest, but after meeting a paraplegic student, he decided to change the concept from a video game to a writing tool for the disabled. Eye-tracking software was nothing new, but at 18, Cruz was able to build the full system into a set of glasses for less than $300. Behold, the Eyeboard was born. Today, Cruz is back on his original path and working on Gymtrack, a wearable device that gamifies exercise. 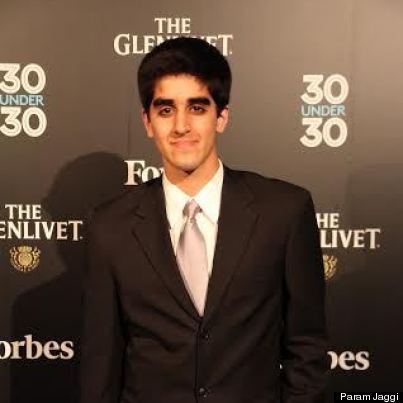 “Young innovators are important, just to show people that mentally, if you have an idea, you have the ability to do it.”

Growing up, Param Jaggi was motivated and inspired by seasoned innovator and role model Steve Jobs. As a curious 12-year-old who questioned why carbon emissions expelled from moving cars, Jaggi evolved into a young adult interested in building environmental projects that help make sustainability economical. At 18, Jaggi created an award-winning algae-filled device that fits over a car’s tailpipe and turns carbon dioxide into oxygen. As a freshman at Vanderbilt, he founded Ecoviate, a hardware technology company behind an in-the-works mobile app that will provide monetary rewards for living a sustainable life. (Green does represent cash, after all.) 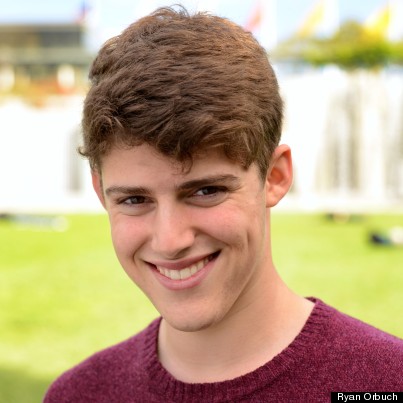 “Where I think really powerful innovation can happen is when I take what I’ve learned from Finish and bring it to much bigger things.”
High school is tough. That’s why 10th grade finals week at Boulder High School left Ryan Orbuch and his friends struggling to stay on top of their schoolwork. Orbuch’s school planner and available organizational apps available didn’t help, so he decided to take matters into his own hands by creating Finish, a task-completion app for iOS, along with his buddy Michael Hansen. Fewer than 24 hours after it launched, Finish hit the number one spot in the productivity category on the App Store. In 2013, Orbuch won an Apple Design Award. Currently, he’s taking a gap year to improve Finish but hopes to lend his skills to education in the future. (We can only hope he’ll make 10th grade finals a little less stressful.)