There are more connections between the neurons in your brain than there are stars in the Milky Way. That's one of those statistics that makes you gasp in awe for a moment, and then makes you shrug because it's hard to grasp what it really means. What makes those seemingly infinite connections fascinating, though, isn't just the sheer quantity of them. It's the fact that they're always changing, starting before you're born and continuing until you take your last breath.

Understanding how and why your brain changes is a key message of a new exhibition, Your Brain, at the Franklin Institute in Philadelphia. The interactive exhibition's message is particularly relevant not only to the visitors of all ages who will pass through the science museum's doors but to all of us. Knowledge about these lifelong changes fosters opportunities to keep your brain in good working order and will also influence how brain science could change our society. 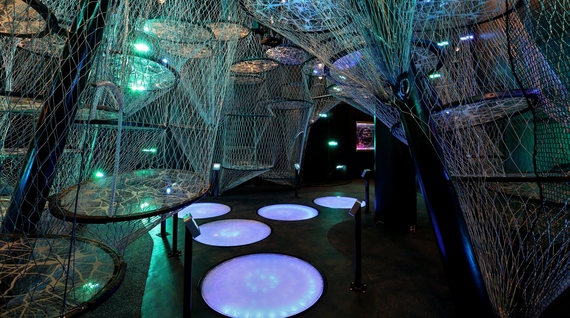 Visitors to the the Franklin Institute's new Your Brain exhibit can step, climb, and jump through the 18-foot-tall Neural Climb to trigger simulated brain signals with bursts of light and the sounds of real neurons firing. The immersive structure provides a new perspective on the complex connections and dynamic communication happening inside your brain every second. (Credit: The Franklin Institute)

Believe it or not, you used to have even more connections, or synapses, in your brain than the dizzying number you have now. Babies are born with almost all the neurons that make up an adult brain, but they develop close to twice as many synapses. As they explore the world around them to figure out how things work, the synapses that get used become stronger, while those that don't get used fade away.

This invisible but essential process in the brain underlies some classic toddler behavior. Give a toddler a rocking horse to ride on, then replace it with a small-scale version, and chances are that she'll try to jump on the tiny horse for a ride anyway, to comic effect. At this age the connections underlying the desire to play are already strong. The connections that discourage play based on the inappropriate size will strengthen later.

Adolescence is another time of drastic change. During puberty brain regions associated with the reward system are far more active than during adulthood. At the same time, synapses in the prefrontal cortex, a region of the brain particularly important for decision making and self-control, show a much slower rate of development.

We've long observed that teenagers take bigger risks than adults do. We are just beginning to understand how brain activity associated with underdeveloped self-control and a hyperactive reward response could explain this behavior. Today texting while driving is a particular source of risk for new teenage drivers. Through a driving simulator in Your Brain that challenges your ability to multitask, we want visitors to recognize the limitations of the brain that make this practice so dangerous.

When we're adults, the changes in our brains are more finely tuned, but they're no less important. Every time you learn something new, your brain's synapses change to code this new experience. How does this affect your day-to-day perception of the world? Your brain uses past experiences to filter what's important, interpret new information, and predict what to do next.

Think about the first time you travel a new route to work. You pay attention closely, noting particular landmarks that help you find your way. You are engaging your short-term memory, sending more frequent signals between active neurons. But as you retrace your commute day after day, that information is converted to long-term memory. Your brain increases the number of synapses that communicate this information and perhaps even rewires other, less-active pathways. The need for navigation fades into the background, and you are now free to focus your attention on other aspects of your surroundings.

Instances of traumatic brain injury offer more dramatic examples of the brain's ability to rewire itself. Even in cases of major brain damage, the brain can repurpose other regions to take over some tasks of the damaged area. By studying how the biological process works, scientists hope to find new therapeutic drugs or even dietary habits that can improve and accelerate this reassignment of function.

Emerging research about the changing brain is already reframing practical issues in our society. For example, new brain-based teaching strategies for young children recognize and relate to their developmental patterns. Many states are implementing graduated driver licensing for teenagers that tries to minimize high-risk behavior, especially since the imbalance between reward and self-control in the adolescent brain is heightened by peer pressure. And countries with aging populations might benefit from considering how the "cognitive age" of their citizens may be a better indicator to guide economic and social strategies than actual age.

With about 86 billion neurons in the adult brain, we're a long way from deciphering exactly how the connections between those cells change over the course of a lifetime. But, as Your Brain demonstrates, as technology continues to reveal new insights about the body's most complex organ, our understanding of the changing brain will change the way we live and learn.

Chief Bioscientist at The Franklin Institute