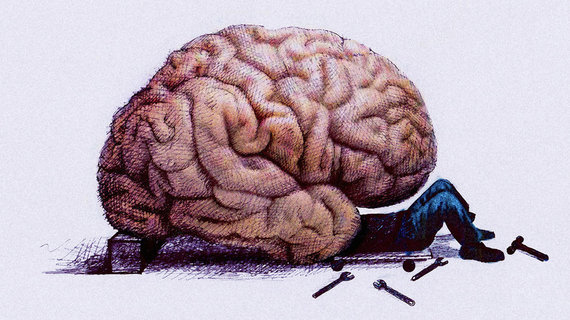 Despite its exalted status as the control center, the capitol of the body politic, the brain gets short shrift in the health and fitness world.

Have you ever seen a brain emoji on a menu the way a heart icon marks healthy dishes?

Does your internist check your cognitive function annually, as he does your pulse, blood pressure and listens to your heart?

Does your fitness program target brain the way it does muscle? The heart is a muscle, a special one, but a muscle nonetheless?

One explanation for this lies in a relatively new understanding of that gelatinous glob in our head that makes us human. Until recently, conventional wisdom claimed that we were born with all the neurons we would ever have. After childhood, when some neural circuits get hooked up, you were done. It could only get worse. With age or injury, you lost neurons and IQ points. In other words, the brain may change, but not for the better.

This turns out to be wrong. In the 1980s, a scientist attempting to understand how birds learn to sing (yes, you read that correctly) made a critical observation. The number of neurons in the brains of male canaries dramatically increased during mating season. This is the time when the male birds learn new songs to attract females. The study made waves beyond the ornithology world.

It was not until 1998 that neurogenesis was demonstrated in humans. Not only can we grow new neurons (neurogenesis) throughout life, we can do things to dramatically decrease their loss and to create new circuits (neuroplasticity). Ironically, this parallels our understanding of muscle and lends itself to similar notions of training. The brothers, brain and brawn.

A growing body of research has begun to explain how we can best take care of our brain. Such care can allow us to concentrate better, learn faster, remember more and prevent brain changes associated with aging. Certain types of physical activity, foods and sleep have proven essential to maximizing brain health.

A brain region called the hippocampus controls both mood regulation and memory. It is also one of only two brain areas where neurogenesis occurs. Remarkably, antidepressants have been shown to stimulate neurogenesis. But there are easier and more beneficial ways.

The hippocampus shrinks in late adulthood, causing impaired memory. Moderate-intensity aerobic exercise has been shown to increase hippocampus size and significantly improve memory. In other words, these age-related changes are not inevitable and can be reversed.

Physical activity increases the production of brain-derived neurotrophic factor (BDNF), a sort of Miracle Grow for the nervous system. BDNF supports neurons' growth and survival, modulates neurotransmitters (the messengers in nerve to nerve communication), and facilitates neuronal plasticity, which is essential for learning and memory. Pretty amazing stuff. And all for the price of a brisk walk.

As you might imagine, BDNF's to-do list is important throughout life. Numerous studies have documented dramatically improved academic performance in children who were provided the structure for daily physically activity. Problems with attendance, discipline and concentration were also markedly diminished.

From a neuroscience perspective, this is not surprising. Physical activity turns on the prefrontal cortex. This part of the brain is responsible for what is called executive function, something you don't want to be without. It allows for planning, organization, deciding to initiate or delay a response, consequence evaluation, learning from mistakes and maintaining focus.

One way of assessing if something is brain-friendly is to observe its effect on BDNF. This applies to what we eat and the size and frequency of our meals. High fat and refined sugar have been shown to reduce BDNF, neuronal plasticity and learning. On the other hand, intermittent fasting and caloric restriction increase the production of BDNF. Omega-3 fatty acids, the good fat from flax seed and salmon, also elevate BDNF levels.

The interpretation of blood sugar levels is about to undergo a big change. For some time, we have known that Type 2 diabetes is associated with decreased cognitive capacity, brain atrophy, dementia and stroke. More recently, the link between these conditions and prediabetes has been made. A growing body of evidence links blood sugar levels in the high end of normal with significant brain pathology. Blood sugar in this range appears to cause damage by triggering inflammation and excessive clotting. The hippocampus is particularly sensitive to these changes

Sleep may be the most important element in brain maintenance. BDNF levels drop with sleep deprivation. Not good. But it gets worse. Recent research suggests that the primary function of sleep is the removal of toxic waste, byproducts of cellular metabolism. All neurodegenerative diseases are associated with the accumulation of these waste products. Sleep appears to allow a cleansing of the brain.

It is well established that the brain uses more energy than any other human organ. While weighing only 2 percent of our body weight, it consumes 20 percent of our resting metabolic rate. Billions of neurons must be maintained in an active state even when not firing.

The more active an organ, the more toxic metabolic byproducts generated, and therefore the greater the need for regeneration and repair. Much of the brain's gluttonous energy consumption supports basic housekeeping functions.

We now know that we can help the brain with its housekeeping. Physical and mental fitness are inseparable. Move more, sleep more, eat less. Think about it.