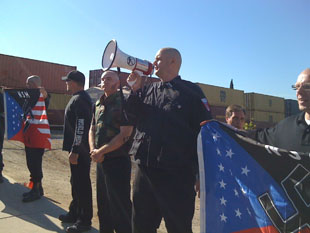 When a picture of Ohio 9th District Republican Congressional candidate Rich Iott dressed in a German Waffen SS uniform appeared in the Atlantic magazine a couple of weeks ago, it caused a stir. But the real question is why consider voting for a guy who only plays dress up with a Nazi uniform, and offers only half hearted compliments for National Socialists, when you
can vote for the real thing. In California's Inland Empire, the 14th largest metro area in the nation, and one of the most hard hit by the recent housing based economic downturn, two candidates are running for local office that give Aryan voters a real choice. Jeff Hall is one of them. Hall, Southwest Regional Director of the neo-Nazi National Socialist Movement is running for Riverside Municipal Water Board and has a message for voters in this diverse city of 300,000 people about an hour East of Los Angeles:

We have seen or heard of local governing bodies hiring people to police water usage in our communities. We also personally face restrictions and high water bills in Riverside at a time when our tap water is rated second worst in the nation just last year by the EWG. Responsible water conservation is an important issue, as is the way in which we approach and address the issue and our community which it directly affects. The Water Board has been used as a stepping stone to other government offices or elected positions while every day we face the realities of the restrictions and high costs that affect our families and businesses. Water is not only the lifeline of our parks and businesses; it affects our lives and is a life source.

But what about his other experience that makes him qualified, not only for water board, but the presidency as well:

I have been a leader and organizer on the job and within the NSM for years. My work experience, life experience and love for my community are all I have to offer as my credentials, however, as a community organizer I`m qualified to be the Commander and Chief of these United States by the standard set by our liberal media and individuals which serve as representatives of the far left. We must not forget Obama`s candidacy platform and declaration of qualifications for Presidency based on being a community organizer. I am also able to formulate a complete sentence with great ease which has been the bane of Jerry Brown and George Bush`s political careers... A vote for a representative of the NSM is a vote for America and White civil rights.

NSM Candidates Hall and Ready discuss issues at anti-immigration rally
The National Socialist Movement can claim credit for a previous candidate for office, on again, off again NSM leader, Arizonan
JT Ready
, a former college Republican president and local GOP party organizer. While Ready has been unsuccessful in his runs for elected office, and has since been rejected by the local GOP, he has appeared in public with and rallied for
Arizona State Senator Russell Pearce
, the author of controversial legislation aimed at requiring local police to target suspected undocumented persons for stops, and another bill seeking to strip the children of undocumented parents of their citizenship despite the requirements of the
Fourteenth Amendment
. Ready who has had minor brushes with the law, now heads up an armed private border patrol group that he hopes will make incursions into Mexico. When he is not stumping for Pearce he can be seen calling the President "Obango", holding up Hitler portraits, and urging for a white homeland free of Mexicans and Blacks. In fact, Ready came all the way from Arizona to protest Mexicans at a Riverside rally that Jeff Hall organized last year.
WARNING: VIOLENT CONTENT

Another Inland Empire "pro-White" candidate is mobile home repairman and former Aryan Nations California Chapter leader, Daniel B. (DB) Schruender, who is one of six candidates running for two open seats on the Rialto Unified School District board. At its peak Aryan Nations was one of the most popular neo-Nazi groups in the nation, known for its summer hate fests which attracted people like Bufford Furrow, who shot kids at a Jewish camp before murdering an Asian postal worker in August 1999. While I don't share his views on race, as a longtime Mets and Angels fan, I do give him credit for trying despite heavy odds in a district that is only 6% white, and maybe even less "pro-White." "We are just here to protect white rights to make sure we don't start getting screwed,' he told the Riverside Press Enterprise. While I always hoped a Cal State San Bernardino grad would run for office, I was hoping for someone a bit more center on diversity issues.

Earlier in the decade the founder of the racist hate group Save Our State, Joseph Turner ran for school board and county clerk in San Bernardino as well as launching a failed municipal bill that among other things would prevent undocumented people from being able to rent a place to live. His website featured cartoons degrading Latinos and the phrase "wetback." His rallies, which were promoted on Nazi websites like Stormfront, were known for the presence of "uninvited" supporters, who he never repudiated, displaying swastikas. Turner himself wrote on the SOS website in 2005 ,


He would also encourage followers with the following prose: "Bring your bats, fellas. If we are lucky, we are gonna need them. PING."
Turner who was allegedly fired from the Federation for American Immigrant Reform as their Western Region official, took a stint as a political strategist for the San Bernardino city police union, before being hired in the $57,000 a year position of special projects coordinator for San Bernardino County Supervisor Neil Derry, who has a knack for picking employees. His Chief of Staff Jim Erwin resigned around the same time Turner was hired in 2009, after he was charged with 10 felonies.

Even across the country, California hatemongers are having an impact. Former California Congressional candidate, White Aryan Resistance founder, and KKK Grand Dragon Tom Metzger is running (again) for Congress, this time from his new home in Indiana. In keeping with the times he is expanding his horrendous display of hatred to include Muslims. In 1980 Metzger garnered 46, 361 votes or 13.4% of the vote running as a Democrat against San Diego Republican incumbent Congressman Clair Burgner. He got 76,000 votes or 2.8% of the vote in the Democratic primary race for a U.S. Senate seat two years later. Metzger and his organization were devastated in the 1990s after a Southern Poverty Law Center civil suit found him civilly liable for millions of dollars for his role encouraging Portland skinheads to attack blacks. Those skinheads murdered an Ethiopian immigrant with baseball bats leaving his young son orphaned.

Metzger may be on to something. In the 1920s Indiana was the state with the greatest Klan presence and there were over four million politically active members nationwide. Even in his former home state of California, the Klan scored some victories. In 1924 the KKK got four of its members elected to Anaheim's governing board and took over most of police department in an effort to make the Orange County city a model for the racist organization. A year later the Klansmen were recalled. In other parts of the country the Klan elected people to the Senate and a governorship. Future leaders like Harry Truman, Supreme Court Justice Hugo Black and later Robert Byrd would have their legacies tarnished by membership in the Klan early in their careers despite their subsequent repudiation of the organization. Let's hope that in politics, bigoted candidates become an anachronism and California is not a bellwether for intolerance in the political arena for the rest of the nation.