A couple of months ago, I was a guest on HuffPost Live's The Pet Show, hosted by Nancy Redd. I was there to promote the PetSmart Charities National Adoption Weekend, a three-day event featuring cats and dogs in need of homes. Just before my segment, while I was sitting on the set's couch with Mervin the Chihuahua bouncing in my lap, the show ran a short clip about a recent study by British scientists on cats. According to Nancy, the research proved cats are not attached to their human owners, but only see them as food providers. Later, when I challenged these findings, Nancy remained skeptical; she simply couldn't believe my own cats saw me as more than a much needed can opener. 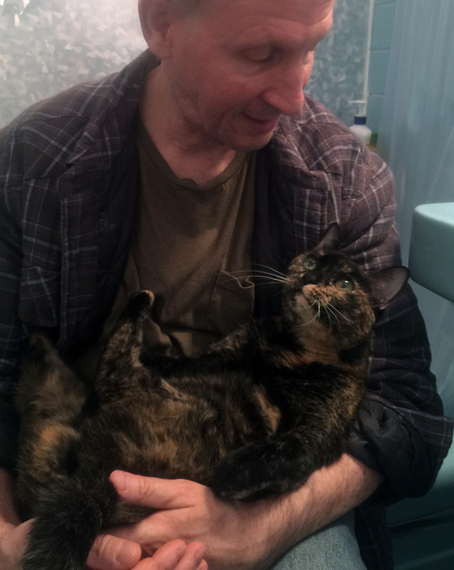 Nancy was hardly alone in her interpretation of the research. The headline in the Washington Post read, "Your cat might not really care about you, study suggests." Or there was The Telegraph's, "Cats do not need their owners, scientists conclude." Close to two dozen other articles ran similar headlines. Someone seeing and hearing all this could be forgiven for believing cats really are aloof creatures who have manipulated us into sharing our homes and sparing them the trouble of hunting for their daily sustenance. Except it isn't true and it isn't even what the study says.

Here's what the scientists did: first, they put a cat in an unfamiliar room. For three minutes each, the cat was left alone, and then had a stranger join him and later was alone in the room with his owner. They did this with 20 cats. The only significant behavior observed that suggested an attachment, in the researchers' view, was the cats' tendency to vocalize when their owners left the room. In similar experiments, dogs with their owners and toddlers with their mothers had shown much more anxious and dependent behavior. Based on this, the researchers concluded cats do not seek safety or security from their owners.

How does a cat acting independent and secure in unfamiliar surroundings equal, "they don't care about you?" It could be interpreted as just the opposite -- a cat's bond to his person is not based so much on a need to feel safe, but on pure desire for companionship. The cat may be effectively saying, "I may not need you as much as a dog or a baby in certain ways, but I love you just as much, anyway."

Then there's the question of species bias. Cats are not dogs and don't communicate in the same ways. While a dog may express relief at seeing his owner by vigorously wagging his tail, a cat may feel exactly the same but show it with a more subtle tilt of the head or blink of the eyes. I was actually a little surprised the cats in the experiment vocalized as often as they did -- as a long-time cat parent, that one behavior alone shows me how attached they were to their owners, even if the researchers weren't convinced.

Finally, we have a tendency to lump all the members of a species together and make generalizations like "cats don't really care about you." We forget that, like people, they are individuals with their own unique personalities. Every cat, like every person, is different and has different needs.

Take my cat, Joy. I found her while leading a project to trap and spay and neuter the feral cats living behind a nursing home and hospital in Brooklyn. Just a four-month-old kitten at the time, she sat shivering under a pine tree, clearly very sick. We rushed her to a veterinarian where she stayed for three days. Unsure if she would make it, I decided to give her an optimistic name. She survived and I ended up bringing her home. That's her now with me in the photo. She's a very happy creature who makes friends easily with other cats. Every now and then, she gets anxious for my attention and will cry out over and over until I take her in my lap, hold her like a baby and pet and coo over her for a good ten minutes or so. Then she's fine for a few days until she lets me know she needs another dose of affection.

So decide for yourself and look behind the headlines and stereotypes. If you're considering adopting a cat, now is the time. PetSmart Charities' next National Adoption Weekend will take place from November 13 through 15 in the over 1,400 PetSmart stores in the U.S., Canada and Puerto Rico. Stop by and you may leave with a new feline companion of your own!