For millennia, noodles have played an important role in culinary history. From take-out favorite Lo Mein to those things floating around in our Won Ton soup (officially termed "Won Ton noodles"), it seems this is one cuisine that no matter how many times we've had it, always has a place at the table. Yet, how many types of noodles can you actually name?

It seems few noodles have swept the globe with as much intensity as the ramen craze of the last decade, and even though so many of us spent time as poor college students downing bricks of ramen by the dozen, we somehow never saw it coming. When considering how little we know about the other noodles we slurp down with regularity in our favorite Asian restaurants, it's no real surprise that when it comes to noodle knowledge, most of us are left hanging out to dry. So here's a little secret: The noodle to watch? Udon.

Japan's "lesser" cousin of the more delicate Soba noodle, Udon is making waves right now for a lot of the same reasons Ramen did: It's cheap, easy to make, and down right delicious. Known for its chewy texture and thickness in size, these neutral-flavored wheat noodles make great additions to a plethora of dishes from stir fry to soup. Yet now it seems that more attention is being paid to the noodle and less to the things surrounding it, and like any food under the microscope of "what's trending", there seems to be more than meets the eye. 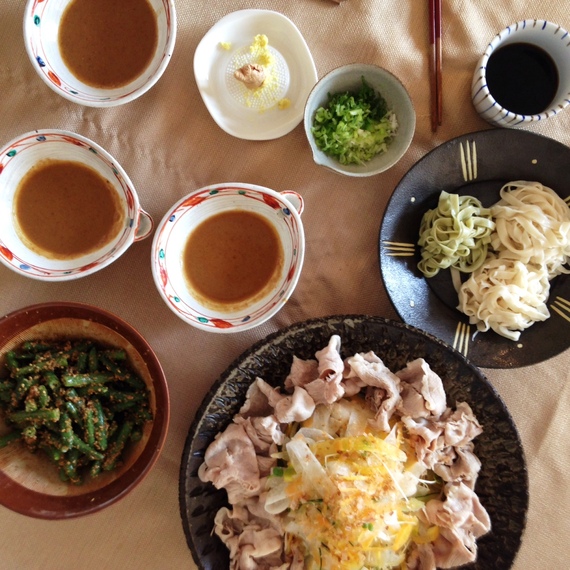 So what makes Udon so special? Well, for one thing, it's the secret ingredient: Feet. One of the key elements in making irresistible Udon is a little fancy footwork; and if that's not enough to noodle over, one needs only to ask one other question: Why?

Yoko Isassi, Chef and owner of Japanese Foodstory in Los Angeles, was born in Seki, Japan, has a longstanding relationship with noodles, and tells it like it is: "Historically it was mostly women making noodles, and when it came to the notoriously tough Udon dough, kneading by hand was too difficult," she says. "By using their feet, it allowed them to knead with their entire body weight, which was a less tiring and far more effective technique."

In fact, according to Yoko, women would wear backpacks filled with books or hold onto heavy rice bags, all for the sake of making the job a little easier and the dough that much better. 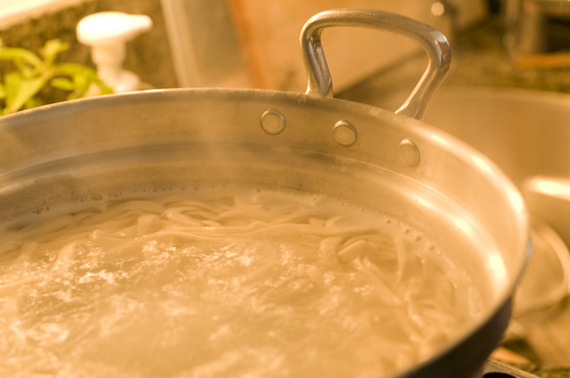 But then the machines took over. With the rise of Sony in 1946, Japan quickly became a technological superpower. In the '60s, what was a long-standing tradition of dedicated culinary foot stomping was quickly replaced by sanitary concerns over foot-to-noodle contact, and noodles were suddenly being mass-produced by machines throughout Japan. As tightly packed as television semiconductors, noodles in cups and bags were being shipped all over the world.

"Actually, the use of machines helped spread the culture of Udon," Yoko proudly states before confessing that a number of her favorite noodles come ready-made.

OK, so maybe the robots aren't all evil. But in this Internet-driven world where we seem to be ever battling to find the humanism in technology, leaving family-born traditions behind can be a painful loss of nostalgia. And maybe it's for this reason that it seems history often has a way of repeating itself.

"The last few times I went back Japan, a lot of people were using their feet to knead again," Yoko explains.

In fact, head to Sanuki, Japan (Yoko's favorite place in the world for Udon), and you'll literally find hundreds of Udon shops boasting artisanal noodles, a trend only gaining more and more of a following.

"Today, it's very common for Japanese men to take up noodle making as a hobby after they've retired," Yoko tells me. "And here [in LA]," she continues, "Japanese food is very popular and more people are showing an interest in Udon." So much so that Yoko decided to begin teaching an Udon Noodle: Foot Workout class, along with other Japanese cooking classes, dedicated to Udon making, feet and all.

"It's a unique experience for [the students]. They take a lot of photos and laugh the whole time, and make fun of each other as they're stomping around on the dough." I ask if she feels it's liberating, and she quickly affirms. 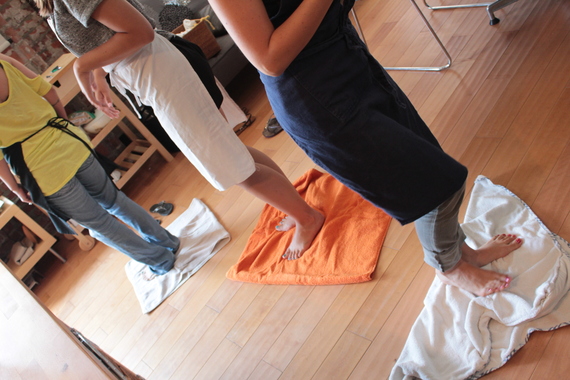 For Yoko, teaching Udon making is not only fun, but creates a strong sense of connection with her lineage. She recalls one of her grandmothers passing away, and the regret she felt over not having learned more from her. She looks at traditional Udon methods as a way to stay in touch with her heritage, and maybe that's often what's needed for a food to stand out in this fast paced culinary climate. In a world filled with planes, trains, and automobiles, sometimes it just feels better to use your feet.

This post was written by Jesse Rothman for CourseHorse

The community for knowledge seekers