It wasn't the answer I was expecting. I asked again.

"You don't tell your friends at daycare you have two dads?"

I had no idea how to respond.

Ever since our kids were born, we've tried to help them understand and be proud of the fact that their family looks a bit different than others. We've read all the bedtime stories: Daddy, Papa and Me, A Tale of Two Daddies and, of course, And Tango Makes Three. We've also joined a few gay parent groups so our kids could meet other families like theirs. But with two active kids, we don't always have time to attend "gay parent" get-togethers.

I started to wonder if we'd made a mistake switching our son to a new daycare last fall. It was rated one of the top daycares in the community and right next to the elementary school our kids were going to attend. When we received a call that a spot was available, we had less than 24 hours to decide to take it. Maybe we hadn't thought it through completely.

For any family, it's not easy finding childcare, especially when there are more families than spots. But as two gay dads, we felt an added pressure when searching for the right one. Each daycare we called would put us on the wait list and then explain that we should have contacted them when we were pregnant. Most got the joke when we responded, "Well, with the same man parts -- and as much as we tried -- we just couldn't get pregnant." Others didn't think we were funny. (We took our name off of those waitlists.) 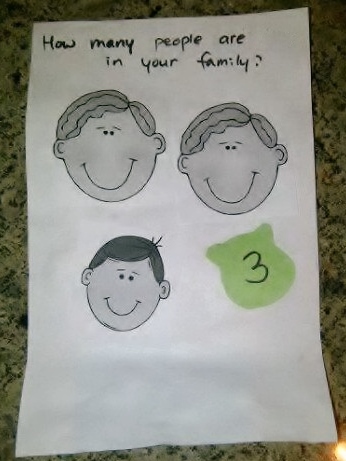 Sense of humor aside, in addition to a loving and caring environment, the most important thing was to find a daycare that supported and celebrated all families, and we thought we had found one.

In fact, just a few months earlier when we asked our son who he wanted to make Mother's Day gifts at daycare for -- maybe one of his grandmas or aunts? -- he looked puzzled.

Of course we wanted the beautiful clay... somethings. I'm not really sure what they are -- tea candle holders or maybe paperweights? But who cares, because they were made with love from our beautiful boy and he was so proud to give them to his two dads.

So I changed my question: "Why don't you tell your friends at daycare you have two dads?"

"Silly, Daddy," my son said, smiling and rolling his eyes at me. "They already know I have two dads! Duh!"

In that moment I realized that my "new normal" was actually our son and his friends' "normal." In order to instil a sense of pride in our kids about the fact that they have two dads, we just need to be visible and engaged parents who love and support them. Which we do -- more than anything else in this world.

It doesn't mean we'll stop reading It's Okay to Be Different. And while I'm hopeful it won't happen, I do need to prepare myself for the day one of them might come home from school, upset about being teased for having two dads.

But for now, my husband and I will get ready to host the coolest pirate birthday party for our soon-to-be 5-year-old and 18 of his closest friends -- who, silly Daddy, already know our kids have two dads. Duh!