If you've read the new Census Bureau on income, poverty, and health insurance you may be asking yourself: Where did our seven thousand dollars go?

We're inundated with economic numbers every day, so let's just consider that one figure for a moment: Seven thousand dollars. Actually, the statistics tell us that the figure for your household is probably even larger than that. The average under-65 household in the United States has lost $7,490 in annual income since the year 2000, according to 2012 census data.

That's a lot of money for most people. And it raises the question: If the average household -- if your household -- didn't get that money, who did?

Somebody got it. We've been through a rough recession -- in fact, for many of us that recession is still going on. But corporate profits have soared once again. Benjamin Landy of the Century Foundation created this graph with data from the US Bureau of Economic Analysis: 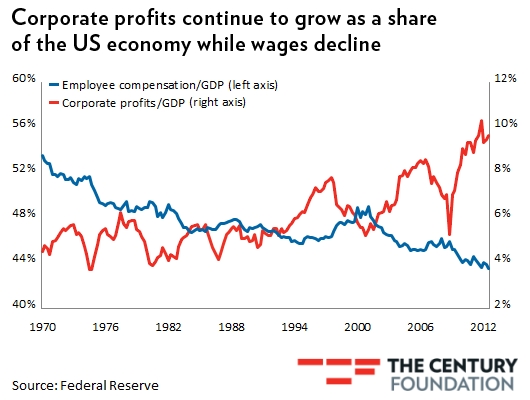 Less money has been going to the average household in wages because more money is going into corporate profits. That in turn drives the personal income of the wealthy, who own more stock than average Americans, and supercharges the income of the highly wealthy -- CEOs, senior executives, and high-net-worth individuals who invest heavily in stocks, hedge funds and the like.

That's turning the United States into an economy of the rich, by the rich, and for the rich. Had households received their missing seven thousand dollars, it might have been spent on home improvements, consumer goods, other kinds of services. That's the kind of spending that leads directly to increased employment - and therefore to better wages for everyone. But when it's diverted into the pockets of the wealthy and ultra-wealthy, much less of it gets spent.

Instead we see the financialization of the U.S. economy, as more of our nation's corporate profits are derived from banks and other non-productive handlers of money - intermediaries, overcharging hedge fund managers, and the like. Economist Wouter den Haan provided the following chart, also from BEA data, of financial-sector profits as a percentage of total US profits:

Wealthy people and corporations have been using their money to influence government decision-making in ways that have lowered their overall tax burdens substantially since the early seventies. When they collect your seven thousand dollars, they pay far less tax on it than they once did.

That's less money for education or health care or fighting poverty. They don't mention that when they try to convince you that teachers are paid too much, or that Medicare and Medicaid should be cut. And they don't mention some of the most shameful facts in the new census report. Here are two of them:

It's shameful when a nation whose wealthiest individuals saw their income increase by one-third in a single year allows 15 percent of its people to live in poverty.

It's shameful when a nation with record corporate profits allows those corporations to pay a tax rate that's near its 60-year low while more than one in five of its children live in poverty.

The middle class is falling behind, the poor have grown in number -- and the folks at the top are doing terrifically well, thank you very much.

About that seven thousand dollars: Since it's based on inflation adjusted numbers, you should know that some parts of your budget have been hit harder than others. The cost of a college education, for example, has soared. That means it's harder than ever to improve your economic status. And wealth inequality, which is measured by something called the GINI coefficient, has gotten consistently worse in this country: 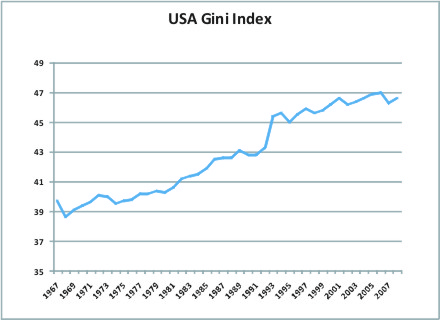 So unless you're in the top economic tier, you haven't just lost seven thousand dollars. You may very well have lost the chance for your children to live a better life, both economically and in terms of career satisfaction.

The chance for our kids to live a better life -- what was that called again? Oh, yeah: The American Dream. That's not just a dream about income, although it's certainly that. It's also a dream about fairness. Most of all, it's a dream of opportunity.

And unless we change our economic direction soon, the dream will soon be over.