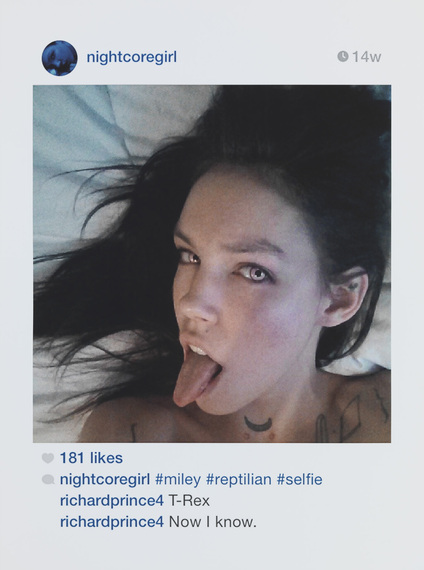 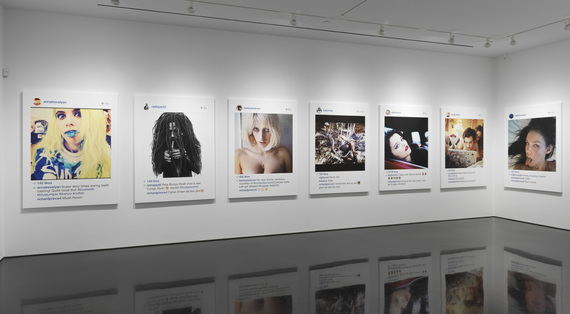 Among the Instagram accounts featured -- which span from those of the famous to the unknown and/or relatively unfollowed -- are those of: 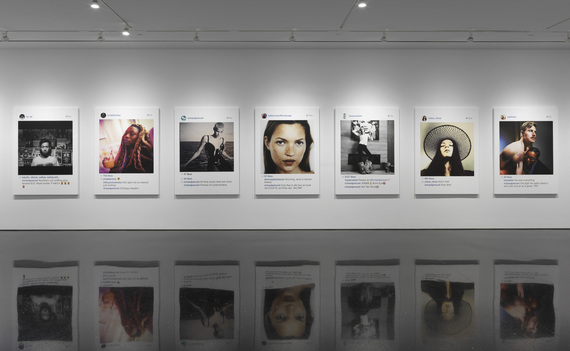 For those familiar with Prince's work, what he has done here -- take others' images (created in various media) and then exhibit them as his own -- is nothing new, and it's what makes him art-historically significant. Though before Prince, artists -- like Robert Rauschenberg and Andy Warhol -- had devoted significant space to others' photographs in their works (via the use of silkscreening, for example) -- Prince took the practice one step further in the late 1970s by making such "sampled" images arguably the entirety of his work and showing very little evidence of any transformation or the artist's hand. Prince's practice was dubbed re-photography (even though the term is not entirely accurate because he photographs images in advertisements and other contexts, not photographs by themselves) and alongside other artists of what is now known as the Pictures Generation, who approached images in a similar way, Prince opened up various avenues for future artists and questioned how we conceptualize authorship and originality in terms of photography (and art in general). Prince's practice has also placed him consistently at the edge of copyright infringement, and the subject of copyright is brought up and debated almost anytime his photographic work is shown.

Prince's most famous works feature images of cowboys taken out of the context of advertisements for Marlboro cigarettes. Arguably just as well-known is his controversial image of Gary Gross's photograph of a nude, 10-year-old Brooke Shields, which Prince titled Spiritual America. Prince's Instagram series probably shares the most in common with his "Publicities" series, which collected autographed celebrity images according to similar looks and poses. 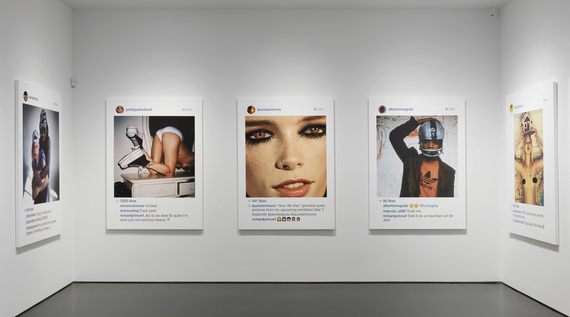 Prince's Instagram series began with the artist simply "regramming" other people's images on his own feed. Again, for those who know Prince's history, Instagram (and particularly regramming) fits perfectly with his long-standing approach to art-making. For this reason, Peter Schjeldahl called the exhibition "fated." Prince has commented about his engagement with Instagram, "It's almost like it was invented for someone like myself... It's like carrying around a gallery in your pocket... Everything became easy."

Aside from the copyright questions which usually overwhelm the general public's consideration of any Prince exhibition, what can we take away from this new show? While I am by no means done thinking about this exhibition and re-considering Prince's work, below are some questions the exhibition provoked me to ask:

#1
Is this a mirror of our present moment -- in which social is our primary online activity and Instagram the #2 social service? Is our world -- spanning from the art and fashion worlds to users relatively unknown -- comprised mostly of us taking sexy selfies or sexy pictures of others? Is this what we're making such powerful technology in order to do?

Prince has said that he takes a particular pleasure in reminding viewers things exist despite the fact that they might not want to see them, so maybe this is an encapsulation/curation of the seedy or not-necessarily most-public side of Instagram? Maybe this is us facing up to our incessant narcissism and our curiosity for others' narcissistic images? Looking at these works you can't help but think about all of these people holding up their phones to post, staring into the little lens, imagining the world potentially looking at them.

It's been said Prince's career (and the particular subject matter he focuses on) can be understood as his coming to terms with his own maleness. Are we seeing here an encapsulation of Prince's own maleness or a conception of contemporary maleness or even the male gaze?

Prince, since his earliest appropriated works, has often been concerned with showing us cultural types. Is this what we're looking at here? Various types of looks and poses and gestures and attitudes of contemporary portraiture on Instagram? The conventions of displaying sexiness and how we try to connect to users through our faces and bodies? What are some common threads here? The urge to please, a burning desire to escape the mundane and get more likes and recognition and fame? On the subject of fame, Prince's exhibition of these images is confirmation of the potential fame to be gained from Instagram. The works are a small curated set for the collecting public, "winners" on Instagram now garnering recognition and contemplation in society's elitist contexts.

Has Prince frozen and printed these images to take us out of the endless scroll of Instagram feeds and to encourage us to take a long look at them? Are we supposed to realize they are fictions, too good to be true, even if they are time- and (often) location-stamped and given the appearance of something which actually happened? Yet at the same time, this is a push-pull relationship, as these alluring fictions constantly pull us back to look at them.

As usual with Prince's work, how do we think about authorship here? Are these entirely Prince's works or is there something else to be said here in terms of collaboration since they are photographs of Instagrams with the accompanying username -- which immediately testifies that they are not by Richard Prince. And what about considering them in the realm of performance art, because there is also the added element of Prince's participation in the comments field, in what Jerry Saltz called "a rock-'n'-roll hip-hop ghetto patois of street dude, hipster, showman, Vegas lounge-lizard, flimflammer, voyeur, and hunter." Is this Prince himself writing in or him taking on the role of someone else (or many others)?

Do we find this show provocative, stirring up questions like I have just shared or too easy, too simple, already behind the times? Yes, these #regrams are on canvas and IRL but reposting, regramming and re-tumblring has been happening for quite some time.

As always, please feel free to send me your feedback, either here or on Twitter. This is the eighth in a series of posts on individual artworks and series. Previous posts have concerned Cindy Sherman, Jean-Michel Basquiat, Keith Haring, Banksy, Damien Hirst, Vik Muniz, and William Eggleston.