Jay Rosen points his Twitter followers in the direction of a study done by the Norman Lear Center at the University of Southern California's Annenberg School for Communication and Journalism, which analyzed the content offered by local news programs. Its findings? Well, if you've ever suspected that your local news was terrible, guess what? Suspicions confirmed.

The Lear Center recorded two weeks worth of news from the eight stations broadcasting local news content in the Los Angeles market, for a total yield of 490 hours of news and 11,253 news stories. What did viewers get? Advertising! Eight minutes and 25 seconds worth of advertising every 30 minutes. By contrast, the average amount of time given to local news was eight minutes and 17 seconds. 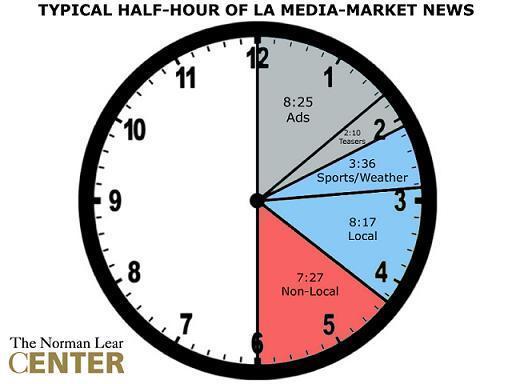 And how did that local news time break down? By far, the biggest feature of local news coverage was crime. Hey, you there sitting at home probably weren't the victim of a crime. But somebody, somewhere was! AND YOU MIGHT BE NEXT, STORY AT ELEVEN.

Meanwhile, your local government woke up that morning and made a bunch of decisions that did affect your life. But if you blink, you might miss those stories. As Lear Center director Martin Kaplan puts it, "They say 'if it bleeds, it leads,' but apparently that doesn't include the red ink bleeding from Los Angeles government, which only got one out of a hundred lead stories." As compared to the one out of every three broadcasts that led with crime.

As Rosen points out, the total time given in a typical half-hour of news to stories about local government and the local economy is less time than what's given to teasers.