A respected group of cancer specialists developed a chemotherapy program for a breast cancer patient. But then her insurance company denied the claim, so the cancer center stuck her with a bill three times as large as what they would have required from the insurance company.

In June of 2012 Ann Marie O'Callaghan got some of the most terrifying news a woman can get: she had breast cancer. Worse, Ann Marie was only 39 at the time and the oldest of her two children was about to go into kindergarten.

Cancers that strike young women can often be very aggressive, but fortunately there were proven treatments for her particular breast cancer. After six months of intensive chemotherapy her stage III tumor had shrunk to become a stage I tumor which could be removed by a simple lumpectomy. After she received local radiation treatment to her breast there was good reason to believe she might be cured.

Then, last summer, her cancer came back. It was only a small, locally recurring tumor, but any cancer that recurs is likely to be tougher to treat because it's already learned to survive the original therapy. Ann Marie wanted to be able to raise her children, so she returned to the same specialists who had knocked her cancer back the first time.

A nurse anesthetist herself, she knew to consult internationally respected oncologists at the Baylor College of Medicine. They recommended a chemotherapy regimen that included an new agent called Perjeta because it had already been shown to be very effective against her type of cancer.

Then her insurance company (Blue Cross) got involved. Blue Cross didn't think that drug was appropriate for her, so they refused to pay for it. The medical director at Blue Cross, whose specialty is treating allergies in children, decided the oncologists at Baylor were wrong. The oncologist at Baylor appealed, but the Blue Cross allergy doctor held fast.

This story shouldn't be news to anyone by now. Here in America refusing to pay for necessary medical treatment is what our private health insurance companies do best. So Ann Marie was left with the choice that even insured Americans sometimes face: your money or your life! Pay for the treatment with your own money or succumb to your disease.

Of course I'm not qualified to evaluate her oncology team either. I can only say that a woman was facing a deadly disease and got some of the best available medical advice on how to fight it. And her insurance company decided that they knew better.

So, how much was Ann Marie expected to pay?

As a new chemotherapy agent, Perjeta is very expensive. A single 420 mg dose can be purchased directly for about $5,000. Medicare pays about $4,290 per dose, and Blue Cross can get it for $4,133 (they accidentally paid for the first 840 mg double dose and then asked for their money back). But Cancer treatment centers pay wholesale prices for chemotherapy drugs, as a recent episode of 60 Minutes revealed, so they usually make a very good profit from any of these payments.

So which of these prices did Ann Marie pay? Because her insurance declined it, she was expected to pay the full billing charge of $12,226 for each 420 mg dose of Perjeta. That's almost three times what Blue Cross would have paid. As a result, her total bill for just the Perjeta was $61,131.

Why was she expected to pay so much?

Here in the US we have a very bizarre system of medical billing. Most health care providers send hugely inflated bills to insurance companies, and then settle for the small fraction (typically about 20-30%) that the insurance company decides to pay them. In other words, not only do we pay about twice as much for our healthcare in the US as they pay in other Countries, our insurance companies are billed an average of four to five times that amount.

So hospitals and other healthcare providers routinely give insurance companies 70-80% discounts off the billed charges for medical services. The uninsured might get discounts too, though usually smaller.

But if you have insurance, and your insurance company denies a claim for any reason, hospitals insist that they are obligated to bill you the full amount for that service.

Put another way: patients aren't just expected to pay for their medical services when their insurance company refuses, they're expected to pay many times the cost of those services. What's more, no one ever has to tell a patient in advance how much they'll be billed for a medical service. Ann Marie was told in advance, because the oncology clinic at Baylor told her she would have to pay the full $12,226 for each dose of Perjeta before she could receive it-- there were no payment plans allowed. 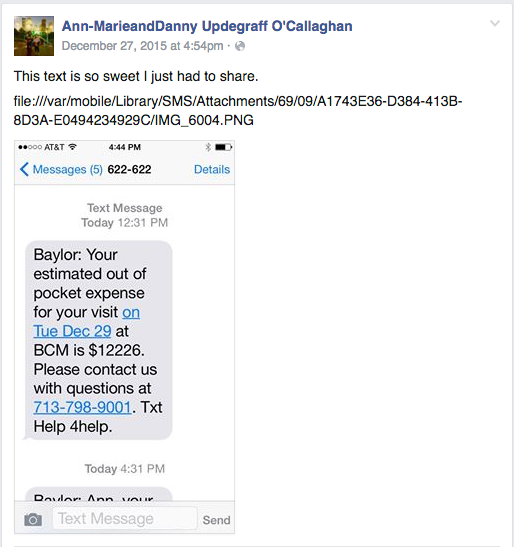 The hospitals and medical clinics insist they are forced to do this by law. Of course the reward here for being such law-abiding citizens is another $8000 profit on top of the profit they would already make, so I haven't seen a lot of evidence of hospitals fighting this obligation. Since Ann Marie's insurance company refused payment, Baylor Medical College was able to collect three times the amount Blue Cross would have paid them. This is a bit of a win-win for hospitals and clinics.

So patients in the US are effectively fined thousands of dollars any time they follow the advice of their doctor against the wishes of their insurance company. And the money goes straight to the hospitals and other medical providers.

Ann Marie was able to pay the full $61,131 for her Perjeta after she sold some of her property, but her story provides yet another example of the many ways in which our health care payment system through private insurance companies is completely broken. Her story also shows how hospitals and health insurance companies in the US have managed to make paying for cancer treatment almost as painful and terrifying as cancer itself.