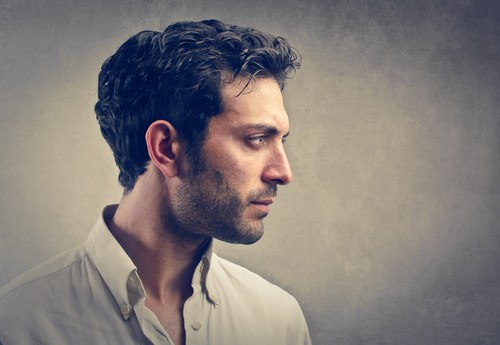 Guys, we need to talk. As a friend and an ally, I feel it's only right that I bring this to your attention. I want to help you be a better you. I want to make you aware of a problem.

It's your Resting Dick Face.

I'm sorry. Somebody had to say it. I'm not saying you're the male Kristen Stewart, but your RDF is putting out some serious vibes and sometimes that makes the rest of us feel... icky.

It's the face you make when you're lost in thought. Or concentrating on a task. Or not thinking about anything in particular. Seriously, what are you thinking about right now?

I'm sure you probably aren't really a dick. I mean, I know a lot of you and most of you are super cool and probably never dickish at all. But your face? Your face is telling another story. Your face is saying "eff you" while your heart might be saying "A grilled cheese sounds good right about now." See, you don't even know you're doing it! I've seen you break RDF to wave and smile or to engage in pleasant conversation. But mostly? You look like a dick.

I'm not judging you for the way you look. You can't help the way your face naturally settles into RDF when you're lost in thought. I get it. It's exhausting to have to be aware, constantly aware, of how you look. It's a tiresome 24-hour-a-day job. But people are watching you. They're judging how you look.

You do it all the time.

And I am going to say this as gently as I can. It's not attractive. You aren't doing yourself any favors with that sourpuss expression. You really should smile more.

Consider this: attractive, desirable, successful men do not walk around scowling and frowning, sending small children to clutch their mom's yoga pants in fear. They aren't Ubering home from happy hour, their face void of expression. No. They flash their "I have a great dental plan" smile and they wink knowingly. Even if they aren't the smiley-flashy type, they still manage to avoid RDF. Their mouth may be all business but their eyes are saying "Dance with me." And if they're really hot, their eyes are saying that in a thick Latin accent.

You may need to practice. Who knows how long you've been putting RDF out there for the world to see? This is going to take some reconditioning. Stand in front of the mirror and experiment with different facial expressions. Practice your smize. It will feel unnatural at first, but keep working on it. Take selfies as you try on different looks. Who cares if you have better things to do with your time? These are your looks we are talking about! I'm just trying to help you avoid that awkward moment when some woman blames your RDF on low sperm count.

But this is the thing. It makes women very nervous when you get all "think-y" on us. We are much more comfortable with you in your Alpha-Male-testosterone-fueled protective mode. Or in your "oh my god, I want you so bad" consumed with desire mode. Those are familiar. They're comfortable to us. They make us feel good about ourselves. And isn't that what really matters? All of that serious thinking makes us nervous. Makes us think you're up to something. So even if you're deep in thought, just give us a smile, a wink, a sexy sideways glance. We'll be so swept up in your masculine pheremones that we'll forgive the RDF we caught a glimpse of earlier.

Sorry if this was a little harsh. Better you hear it from me than from some creepy woman catcalling you on the street. And I don't want to pile on. It's bad enough that everyone's been all up in your "dad bod." You're getting flack for developing a beer gut and having the body that naturally happens when you drink copious amounts of beer and eat pounds of chicken wings. It's not fair that you would be judged and shamed for a littly healthy roundness and be compared to Seth Rogen and Adam Sandler. Eat that hot dog and drink that beer with pride, my friend. Tell those haters they can suck...

You mean people are celebrating the dad bod? You mean college girls are writing essays rhapsodising over your burgeoning belly? Let me get this straight. Dad bod puts you in the D.I.L.F. category? The term dad bod isn't met with looks of disgust and calls for you to throw on a t-shirt and cover that shit up?