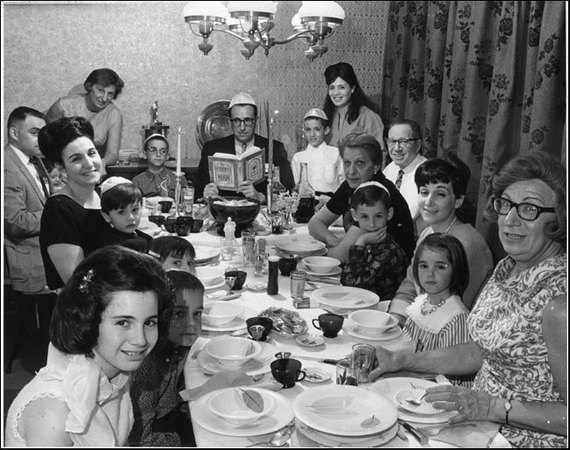 For the second time in five months, I was called back to New York to perform a funeral. Officiating at funerals is, obviously, part of my job, but these were different. Both funerals were for members of my family.

In November, my aunt June, my mother's sister, passed away. And then this month it was Yussie, the father of my stepmother (or, as a congregant with a similar family structure suggested, my "bonus grandfather.")

Despite the pain of losing family members, there were blessings amidst the sadness. It was an honor to be called upon to escort the dead to burial. And it was also an honor -- though a sobering one -- to write for each a hesped, a eulogy, to summarize their lives in words.

The deep power in this process really comes in the conversation, in the mourners' recollection of the dead and the lives they lived. Loved ones who at first, in the shock of loss, come up empty -- "I'm blanking." "Well, what can I say?" -- suddenly find themselves overflowing with memories, long-forgotten recollections shaken loose in the talking, in the telling.

I knew June and Yussie for decades, but in talking to my relatives I learned details I had never known. June, I found out, had been an honor student. She was the one who took my mother to register for school while my grandmother, a Brooklyn garment worker, earned a living. In standing up to Marilyn, a neighbor girl who bullied my aunt Phyllis, June fought so tenaciously for her sister that she actually pulled out a clump of Marilyn's hair.

Yussie was known for his athletic prowess from a young age, but I learned that a rare childhood condition actually left him in a full body cast for two years. I learned that he guarded German POWs in World War II. I found out that the reason he ended up living in Rockland County, north of his New York City home, was that his job driving a pastry truck was eliminated. Yussie, it turns out, had been an economic migrant.

This Friday and Saturday, Jews all over the world will gather for Passover seders. Seders, of course, are designed to bring families together. But this year, an anxiety about contentious family arguments, once primarily confined to Thanksgiving and Christmas gatherings, has begun to seep into the Jewish world. In the aftermath of a belligerent Israeli election, rabbis like Eric Yoffie and Susie Heneson Moskowitz have begun openly discussing political rifts that threaten to sully the joy and companionship we hope to find at our Seder tables.

Passover is a story of the victory of the powerless over the powerful, the slave over the master. Given the context, it's natural that seder table talk often turns political. But arguments that turn hostile aren't liberating. They are stifling. When family members dig in to their respective stances, listening less and yelling more, everybody loses.

And the biggest loss, sometimes, is that we miss out on the opportunity to learn some real history, with real lessons. If I were somehow able to share another seder with June or Yussie, I can tell you I wouldn't waste time trying to convince them of my point of view on Obamacare or Palestinian statehood. I would ask June about growing up with a mother who worked in a sweatshop. I would ask her about her studies, about being a smart young woman in a culture that didn't usually value girls' scholarship. If I were to sit with Yussie, I'd ask him what it was like to be a Jew who literally fought Jew-haters. I'd ask him what it was like to be forced to leave home to find work.

"Much of what happens to us in life is nameless," John Berger recently wrote in Harper's Magazine, "because our vocabulary is too poor. Most stories get told out loud because the storyteller hopes that the telling of the story can transform a nameless event into a familiar or intimate one."

Isn't this the essence of a Passover Seder? Transformation through conversation? The word Haggadah literally means "The Telling." And so we force the conversation, because if we don't remember our history, it dies. We make our kids ask some questions, so we can tell them how we got free. How if we didn't get free, they would be slaves.

Because I never asked. That's how. I can only pray the telling of their stories made those stories intimate ones.

So this year, maybe let's try something new. Let's leave the bickering to Bibi and Bush, to Herzog and Hilary. Let's ask our relatives, our elders, to tell their stories. Like a platter of matzah, let's uncover and raise up those memories, that history.

"Everyone who expands upon the telling of the exodus from Egypt," the Haggadah teaches, "is counted as praiseworthy." May our families expand upon the struggles and triumphs of their lives -- this year, and the next.

And may we have the wisdom, finally, to listen.

(Note: While it would appear to depict a truly wonderful seder, the picture above is not of the author's family.)