I just arrived in Nairobi from the States and it's now been more than 10 days since parts of Somalia were announced by the United Nations to have reached famine level. As aid workers, the "F" word hits us hard.

A famine? How did we get there? How did we let the situation deteriorate so that people are actually dying of hunger?

For months, Oxfam had been warning against the upcoming food crisis. Not just in Somalia, but all across the Horn of Africa region. Several countries have been seriously affected by the drought including Ethiopia, Djibouti and surprisingly the country from where am writing, Kenya. I was reminded of that fact last Friday when I looked at the front pages of all Kenyan newspaper.

Headlines went from "The Shame of Kenya" to "Elderly Kenyan Woman Died of Hunger". A chilling reminder that the food crisis is not sparing anyone.

Our team in the region has been working around the clock to provide basic assistance to tens of thousands to prevent such deaths and save lives. We are now reaching over 1.2 million people across the Horn of Africa. With the generosity of the public and donors, the Oxfam family hopes to reach just over 3 million people.

At the border of Kenya and Somalia, we talked to a few of Oxfam's beneficiaries. We met them on the outskirts of the Dadaab refugee camp. There, we are providing water and basic sanitation to over 20.000. Their stories have been touching us all, and also motivated us to do more. Their stories are as dramatic as they are inspirational.

Meet Abdi Ahmed Yakow. A man in his 50s we met in his tent with two-year-old son Abbas. Both look relatively in good shape but Abdi is suffering from a bad cough.

"It's from walking days and days in the desert. The sand makes me cough," Abdi tells us. He's taking medicines for it. They are costly but badly needed.

What about your son Abbas? How is he doing?

"He's better now. When we arrive, we took him for medical treatment. We went several times because we thought he was really sick. They told me: 'Your son is not sick. He just needs to eat.'

"So they gave him Plumpy'nut and he's better now."

What Abdi is referring to is the peanut-based food for use in famine relief situation. Indeed, his little one looks frail but he'll hopefully be fine.

Abdi's story is what we've been hearing too many times in the last weeks. His family walked for 30 long days in the Somali desert to get there. His pregnant wife barely made it to the camp. On the first day, she gave birth to another boy. The mother and the youngest one are still under care right now. We hope they both make it. 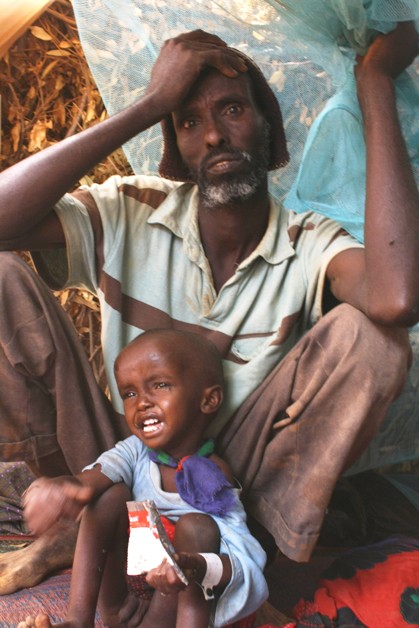 Also at the Dadaab camp, an Oxfam staff talked to Nuriya Sanbur Hassan from Southern Somalia. Nuriya is 40 and has seven children. She lost one baby, a few days after she arrived in the camp. The medical teams couldn't save him.

"My children and I were walking and all we were using for food was green grass and leaves. The second day we got here one of my children got diarrhea and this led to his death," she says amidst the chaos around her as hundreds continue to pour into the camp.

"I have lost one child and the other is malnourished and I have no way to buy her milk and she can only take milk, no other foods." 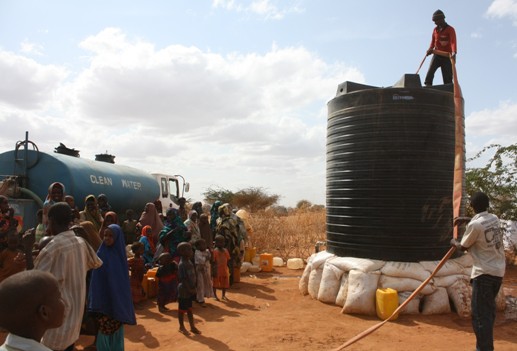 Oxfam beneficiaries are anxiously awaiting water distribution on the outskirts of the Dadaab camp, in Kenya. It's "home" to over 380,000 people.

Albeit heart-wrenching and difficult to hear, we draw on those stories to motivate ourselves to do more, to reach more people and literally save more lives. These people have gone through just about enough suffering human beings are capable of taking in. The least we can do now is provide them with basic relief: water, some food and a place to sleep.

We've got the best of the best of Oxfam's staff here in the Horn of Africa. Engineers, health workers, logisticians, field analysts and coordinators have flown here to establish the best programs to hundreds of thousands of people.

With their help and your support, the public, we'll be able to bring some comfort and perhaps a sense of normality to people like Abdi and Nuriya.

Talk to you soon.

To learn more or donate to Oxfam.