As New Yorkers we know we live in a diverse city where immigrants and their children comprise close to 60 percent of the population. We ride the subway and hear a mix of the 176 languages estimated to be spoken by New York City students' families. We gaze at streetscapes filled with mosques, churches, synagogues and temples, some majestic and some low-slung storefronts. We savor the wealth of our boroughs' cuisines. Yet most of the time we have little knowledge of the real human stories behind the respective religions, foodways and languages that make our city great and give it its cosmopolitan identity.

"Your Story, Our Stories," a new program at the Lower East Side Tenement Museum, invites New York City students and teachers to explore their own family's origins as part of their immigration units. We use our mission -- connecting past to present -- to link the curriculum's focus on turn-of-the-20th century immigration to turn-of-the-21st century immigration. We apply the museum's core principle -- that ordinary people shape history -- to make the students feel that their stories are important, and to empower them to become historians to find out why.

First, students visit the Tenement, delving into the past as they explore recreated early 20th century apartments and learn the immigrant family stories through objects: a Greek Jewish girl's manta, or blanket; an Italian mother's rosary, a Polish Jew's sewing shears. After the visit, museum educators prepare the students to become family historians, and travel deep into their own homes to find and photograph objects, interview family and write essays explaining how the object sheds light on their families' immigration or migration story. 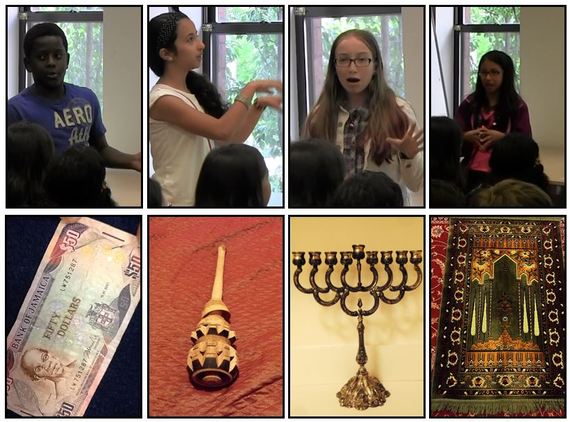 We piloted the program last spring with PS 130, in Brooklyn, and we saw how the research and writing encouraged the students to weave their family story into the broader immigration narrative. When Ipaj's mother emigrated from Bangladesh to the United States in 1999, his grandfather gave her the family's Janamaz, or prayer mat. Ipaj wrote:

When my mother uses the Janamaz, she remembers the memories she had with my grandfather and sometimes smells him. I have many questions for him like: Where did you get it? How much was it? Why did you buy this specific one? This is why the prayer mat is priceless in my family.

Ipaj's reflections on his prayer mat show both the continuities and ruptures of immigration. A tangible, tactile link to family in Bangladesh, the Janamaz motivates Ipaj, born in Brooklyn, to continue the Muslim traditions, and Ipaj emphasizes that he, his father, mother and siblings all pray on the mat. That very connection sparks questions about the mat's origins, and the family left behind.

Taken on its own, it's a powerful story. Yet when we place the Janamaz alongside an Israeli Hanukkah menorah, a Polish Easter basket, an Ecuadorian chicken whistle, a Puerto Rican keychain, an Italian teacup, a Mexican guacamole dish, a Trinidadian roti pan and dozens of objects and documents from the entire fifth grade class, the collective story increases in power and complexity. As a culminating activity, we invited the students, teachers, parents and siblings to the Museum for an exhibit of objects.

One by one, students rose to present their stories. Massimo shared a black-and-white photo of Silvia, a teenager who left Italy in 1958 because, as he explained, "My grandmother's family was poor" and they came to America "for a better life." Josh held on to Jamaican money in tribute to his beloved grandmother, who sold vegetables to earn the funds to send Josh's mother to the United States. Miah shared her Palestinian great grandmother's recipe for a treasured date pastry that sweetens family birthdays and holidays even after her passing; her classmate Tony also featured a recipe of a sweet potato pie.

Together, the two recipes -- one the result of immigration from another continent, the other the product of African American migration from the South to the North -- show how New York families transmit heritage through foods that punctuate life cycles and holidays generations later. While Miah and Tony are several generations removed from immigration and migration, their classmate Jubyaid is much closer to it, but she also discovered connections. Initially she wrote that the samosa "reminds [her] of Bengali people gathered together talking and laughing," but then she "learned from [her] classmates samosas are called by other names in different cultures" and many cultures value "the idea of having a pocket to hold a treasure of yummy food."

The parents in the audience beamed when their own children rose, but also paid close attention to the stories of their classmates. For some -- the Irish, Italians, East European Jews -- the experience of migration was three or four generations behind them, and it was only this assignment that had catalyzed them to pass on and explain the scant information and the few objects -- cameos, jewelry, photographs -- still remaining. For many others, immigration was their personal story, and virtually any object in the home could serve as a lens on the still unfolding dynamic. Yet seeing the object in the context of an American school curriculum in an American museum lent a new frame to that familiar story: the family Janamaz, yerba mate, guacamole bowl, Easter basket was part of the American story.

"Of course we know PS 130 is a diverse school but it was really eye-opening to stop and realize that while our ancestors immigrated over 100 years ago (to this very neighborhood as a matter of fact), so many of Nora's classmates immigrated within the last 10-20 years. Regardless of when they came to New York or where they came from, these immigrants each brought something with them from their country of origin to remember "home" or family."

Overall, despite the variations in time of arrival (spanning almost a century), and the points of origin (spanning the globe), what resonated was the universal dynamics in immigration and migration: the striving and sacrifice for a better life and the immigrants' and migrants' desire to at once bequeath new opportunities to themselves and their children yet also retain and transmit their own cultures. The students' diverse objects provide intimate windows on these cultures, and in the process, show how understanding the very substance of diversity actually reveals a more concrete sense of our shared New York and American identity.

This spring, the Museum is expanding this program, returning to PS 130's fifth grade, and also working with over a dozen additional elementary schools and colleges and universities across the boroughs. We're reaching out to community centers, and our own museum visitors from across the country to collect more object stories. We are exhibiting them on a website, funded by the National Endowment for the Humanities and the National Trust for Historic Places, which will publicly launch later in the year. In the meantime, we invite you to share a photo of your own family object and its immigration/migration story. The more stories and objects we exhibit, the more opportunities we have to showcase the particularities of the various cultures that comprise our cities, as well as the universal dynamics that shape our nation.