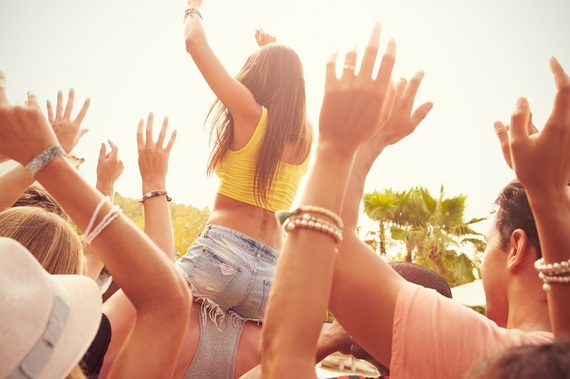 For music lovers, a summer festival featuring hundreds of bands and artists might seem like a great entertainment expense. But, as any festival goer can attest to, the overall cost of attending a music festival can run pretty high.

A 2014 general admission ticket to 11 music festivals surveyed by Complex magazine cost anywhere from $200 to $400. The average cost of a bottle of water was $4, and a beer would set you back $8.50. Still, those prices don't deter the hundreds of thousands of music fans who flock to festivals every spring and summer. In fact, the total combined sold-out attendance for both weekends of the Coachella Valley Music and Arts Festival, which kicks off festival season each spring in Indio, Calif., came in at 96,500 per day in 2014 for a total of 579,000 and a gross of $78,332,000, reported Billboard Boxscore.

Most music festivals aren't cheap, but if you plan ahead and don't mind sharing shuttles, camping space or even a local's home, you might save enough to attend more than one this summer. Ashleyan Lopez, who writes about music for AXS, recommends trying Airbnb.com for inexpensive lodging options, as well as stocking up on snacks, alcohol and other drinks before going to the festival grounds. She also advises doing your research on which water bottles you might be able to bring from home since many music festivals now offer environmentally friendly refill stations.

Getting to and parking at these festivals can be a headache, not to mention a drain on your wallet. If you let the festival's location help dictate your transportation options, you could end up saving money, though. In a city like Philadelphia, for instance, public transportation offers an affordable alternative to finding a spot for a car you won't need once you get there.

"We had to pay a lot for parking," said Lopez about her experience at the Budweiser Made in America Music Festival in the east coast city. "But in a festival like Mysteryland, it is best to carpool there -- free parking and friends can pitch in for gas."

Below are more tips on how you can save money at some of the biggest music festivals taking place this summer.

Drake and The Black Keys are among the headliners for this year's Governors Ball, which invades Randall's Island Park nestled in the East River between Manhattan, Queens and the Bronx. A three-day, round-trip ferry pass between Manhattan and the park costs $55, and a three-day pass for round-trip shuttle rides between Randall's Island and Brooklyn costs $65. The park is also accessible by subway and bus, so most festival attendees won't have to worry about extra parking fees.

Listed rates at the festival's partner hotels range from nearly $200 a night at a Holiday Inn in Long Island City to more than $400 a night at Courtyard by Marriott on the Upper East Side. There is no overnight camping at the island, so attendees better start shopping around or saving up for pricey accommodations now if they want to have any cash left over for a Ramen Burger or a Luke's Lobster roll.

"Bring your own water bottle," says Jon Lal, founder and CEO of BeFrugal.com. "Festivals are usually required to provide a free source of clean water, which can save you money on the overpriced bottled water sold at the food vendors."

General admission passes for this festival, which features Billy Joel, Mumford & Sons, Deadmau5 and Kendrick Lamar this year, include parking and camping fees, so money-conscious music lovers should plan to pitch a tent. General admission RV passes are also available for $250, and you can add parking for a companion vehicle for an additional $25.

A couple of hotels in nearby Murfreesboro are offering packages that include a four-night stay, full breakfast each morning, a trip to and from the airport, daily shuttles to and from the festival and other perks. Package prices at the Embassy Suites range from $1,009 for a single and $589 each for a four-person room.

Once there, use the Bonnaroo app to find affordable food and beverages. And if you want to look like a Bonnaroo veteran, some T-shirts and other discounted merchandise from previous years are available in the online shop.

Tip: If you apply and are accepted into the Bonnaroo volunteer "C'roo," you'll receive access to the festival whenever you are not working. Volunteers also get a T-shirt, free showers, a meal token for every shift worked and other goodies.

Location: Various cities in the U.S.

Ticket prices: Prices vary by location, with many general admission tickets falling somewhere between $35 and $40

More of a multi-act concert tour than a traditional festival, Warped Tour hits 40-plus cities in the U.S. over the summer before doing a single fall show in London on Oct. 18. The tour offers a varied lineup from show to show that includes everything from spoken word artists to hardcore rock bands. And, because it doesn't draw hundreds of thousands of fans like some other multi-day festivals, music lovers can usually find reasonable deals on accommodations and parking.

Attendees are allowed to bring one sealed bottle of water and one small, homemade snack. Water refill stations are available, and the Warped Tour website also states organizers have "worked with venues and promoters to create a lower water price per bottle at all Warped shows this summer."

Tip:  If you're a parent, you can receive one complimentary ticket for accompanying your minor. You just have to be more than 28 years old.

Location: The Woodlands of Dover International Speedway in Dover, Del.

Paul McCartney, Kings of Leon, The Killers and Snoop Dogg will be performing at the Firefly Music Festival, which expects to draw 90,000 attendees per day, reports Billboard. General tent camping from Thursday through Monday for up to six people costs $149 and includes one parking spot and access to showers and other amenities. General RV camping for up to eight people costs $299 and does not include an additional spot for a passenger vehicle.

For those who want to camp with friends and park their cars separately, a parking pass for Wednesday through Monday morning costs $40 and includes two shuttle passes. Also, day parking at the Dover International Speedway is free.

If you don't want to share a campground with more than 70,000 neighbors, rooms at nearby partner hotels participating in the Hotels for Hope program have different rates to fit your budget. For example, it costs $109 a night at the Courtyard by Marriott in downtown Wilmington and $192.52 at the Westin in Wilmington.

Tip: "Bring sunglasses, sunscreen and a hat to protect you for the elements -- as well as a plastic bag to protect your electronics, in case of rain," advises Lal. "These will all be available for purchase, but at a marked-up price. Avoid those costs by bringing your own."

Read: How to Book a Hotel for Less Money

The Las Vegas festival features more than 200 top dance music artists, including Calvin Harris, Avicii and Tiësto. Free parking is available at the Speedway, and valet parking is $20. Three-day general admission tickets, however, are sold out.

Couples can take advantage of free commitment or renewal ceremonies or a legal/non-legal wedding package that includes six digital photos, a themed ceremony and other perks for $320. Those who want to make it legal should bring a marriage license, which costs $60 cash at the Clark County Marriage Bureau.

You might have better luck finding affordable hotel rooms off the Las Vegas strip. The MGM Grand Hotel and Casino has an average nightly rate of $200 to $250, but the Tuscany Suites and Casino's nightly average rate is as low as $159.

Tip: The festival offers shuttle rides between the Speedway, one downtown location and eight different spots on the Strip, including the MGM Grand, Mandalay Bay and more for only $15 per trip.

Tickets for big acts at the Marcus Amphitheater, including The Rolling Stones, Ed Sheeran and Carrie Underwood, will cost you extra. In fact, attending Underwood's performance on July 2 can set you back $96.40. But, with more than 800 acts on 11 stages over the course of 11 days, as well as a Ferris wheel that costs only $5 a ride and a bacon-eating contest where you could win a year's supply of bacon, a general admission ticket offers access to plenty of bang for not very many bucks.

Those who planned ahead this year could get a free weekday admission when purchasing a $19 general admission pass. Parking passes range from $10 to $35, depending on the lot and the date. Some spots are already sold out, so if you know when you plan to attend, purchase your passes soon. The event site lists a few nearby hotels with Summerfest packages that range from $189 a night at the Hilton Milwaukee City Center to $294 a night at the Pfister Hotel.

Last year, food vendors included local favorites like beer-battered cheese curds from Famous Dave's for $6, as well as fries and a deep-fried polish sausage on a bun for $8 from Martino's.

Tip: Look for special promotions that can get you free general admission tickets or discounted tickets. For example, you could possibly get free admission or a discount for donating to Goodwill, buying Quaker granola bars and more.

Related: StubHub Vs. Ticketmaster: Where Is the Best Place to Get Cheap Tickets?

Three-day passes for this year's festival sold out in just 45 minutes, according to Crain's Chicago Business. Future festival goers looking to get the longer, more economical pass better have their credit cards ready when they go on sale next year. VIP passes are also sold out, leaving only pricey platinum passes and travel packages available for those who want to attend the whole festival and catch acts such as Paul McCartney, Metallica and Sam Smith.

There are several options for hotels, including rooms for $179 a night at the Hyatt Regency McCormick Place, which offers a free shuttle to Grant Park. But attendees who bring a vehicle can save themselves some cash and hassle by reserving parking in advance through Lollapalooza's SpotHero site, where advance prices for nearby spots for Aug. 1 range from $10 to $75.

Tip: "If you are really only interested in seeing a few artists or if you know you won't be able to go every day, buy single day passes when available," says Ashley Kubiszyn, marketing and communications director for the online ticket marketplace TicketCity. "Lollapalooza, Austin City Limits, Governors Ball and CMA Music Festival all offer daily passes as well as many more [festivals]."

Budweiser Made in America Festival

Kanye West headlined festivals in both Philadelphia and Los Angeles last year. A Los Angeles show hasn't been announced yet this year, nor have the headliners for this year's Philly fest.

For those interested in heading to Philadelphia for Labor Day weekend, room rates at the Marriott Residence Inn near the festival location were listed at around $299 a night for that Saturday and Sunday. Although parking rates at several lots near the festival are listed as low as $9 and as high as $32 -- according to philapark.org -- road closures and elevated event rates will make you wish you left your car at home or at your hotel, says Lopez.

Tip: PHLASH transportation offers an affordable way around the Parkway area ($2 per ride or $5 all-day). Last year, the PHLASH bus operated Saturday and Sunday with stops at 20 locations between Penn's Landing and the Philadelphia Museum of Art.

Keep reading: Being Happy Is About Spending Money -- on Experiences