image used by permission of OMGYes 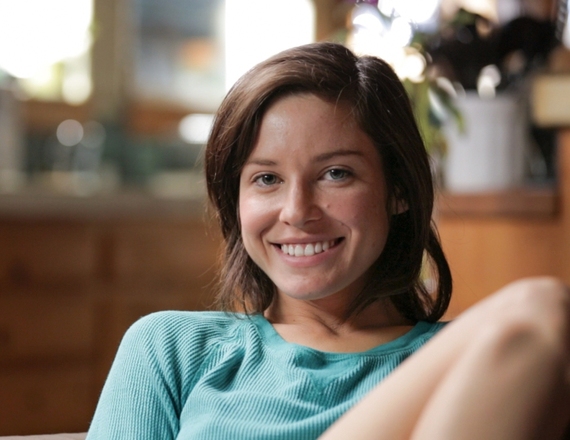 My computer is talking to me, whispering words of encouragement as I trace big circles with my finger on my trackpad. My cursor grazes over the vulva of the woman lying before me onscreen.

Her name is Amber. Amber likes a circular stroke on the upper right corner of her vulva next to her clitoris.

I've just finished watching a video where she demonstrates the technique on herself. And now the program has loaded an "interactive" module, for me to try it on her.

Tentatively, not knowing quite what to expect, I click "Begin."

Amber's vulva, freshly shaved and beautifully lit, appears on the screen. A delicate white arrow traces a circle in the exact spot where I'm supposed to start. Hesitating at first, I press the trackpad, and a cursor appears on Amber's vulva. As we approach Amber's clitoris the image morphs a bit, and her clitoral hood stretches towards my cursor.

We are suddenly connected -- her vulva and my finger.

Doing my best to replicate Amber's preferred technique, I start circling. At first, nothing happens. I keep making counter-clockwise circles, watching as the skin of her vulva moves under the pressure of my touch. Suddenly I hear her voice, speaking to me --

Amber and I are practicing a technique known as "Edging," which means getting to the edge of an orgasm, then stepping back for a moment, so the next trip to the edge will be more intense. To illustrate "Edging," the makers of OMGYes have provided three videos -- each featuring an attractive woman describing her favorite edging technique.

Amber, a vivacious Latina mom, likes to be brought to the edge and then left there for a moment before starting again. Zoey, a pert green-eyed college student, likes to distract herself at the last minute by tapping around her vulva. Sidney, a confident older woman, likes to break it up with long strokes on her inner lips.

Watching Amber, Zoey, and Sidney describe the very different ways they prefer to "edge," I begin to see the power of this program as a communication tool for couples. As a sex therapist, I know there's a limit to how explicitly you can teach this kind of thing in the office. Yes, there are video clips out there, and I often recommend for this purpose. But OMGYes takes it to the next level.

The only thing more direct would be for a woman to just demonstrate the technique herself to her partner. But most of the couples I see in my office have tried that already. It can sometimes get a little frustrating.

Learning From Your Mistakes

This, I realize, is where having a virtual partner may really add value. A piece of software never gets frustrated. You can make any number of mistakes, and since the software isn't really going to have an orgasm anyway it doesn't really care.

I try seeing what happens when I do the WRONG stroke. I'm with Amber, the Latina mom who likes circles. Tentatively, I try crossing Amber's vulva horizontally with my finger. Back and forth. Definitely not a circle.

Unlike a real partner, who might smack me for this, Amber is infinitely patient. No matter how badly I perform, she refuses to lose heart.

"Almost!" she says. "Try again!" I go back to circling, grateful for her patience with me.

The women on OMGYes never get discouraged. The ones I've met so far have all been likeable, realistic, and speak with authority. But sometimes the effect can be a little too realistic.

As I'm practicing edging with Zoey, my phone rings. It's a call I need to take.

Her voice is so earnest and kind that despite myself I feel a pang of guilt. Hoping the person I'm speaking with on the phone didn't hear Zoe's voice, I turn down the volume and continue my call.

I'm momentarily afraid she's going to be mad at me. But instead she just covers her vulva with her hand and says matter-of-factly, "Let's try another time." The fact that I know it's a simulation doesn't keep me from worrying that she's just being nice -- and that I've hurt her feelings. It's a little disconcerting.

Now Let's See What Happens Next

OMGYes is going to be an excellent learning tool for women and their partners. It's beautiful, well-organized, and clearly represents an enormous investment of research and planning on the part of its developers.

The wide differences in how each of these women masturbates are a good reminder, if one was needed, that you should never assume you know what a woman wants. As always, there's no substitute for just asking her to show you.

I'm eager to find out what happens when real couples start practicing with it.

In the meantime, I'll try to remember not to pick up the phone while it's running.

The author has no financial stake in OMGYes -- but kind of wishes he did.