I used to think that beauty was about covering things up, masking imperfections, painting on and lacquering until only the good stuff remained.

To succeed in any creative endeavor, the universe demands that you pay a toll. The price is that you have to show us who you really are. You have to lay it out there, the good, the bad and ESPECIALLY the ugly, the awkward and the uncomfortable. Because if you don't make yourself vulnerable in this way, then we're not interested. As humans, we are drawn to the quirky, the imperfect, the raw and the untouched. Because we are all unique, that is what we most to respond to in others -- their unique qualities, not their veil of perfection. 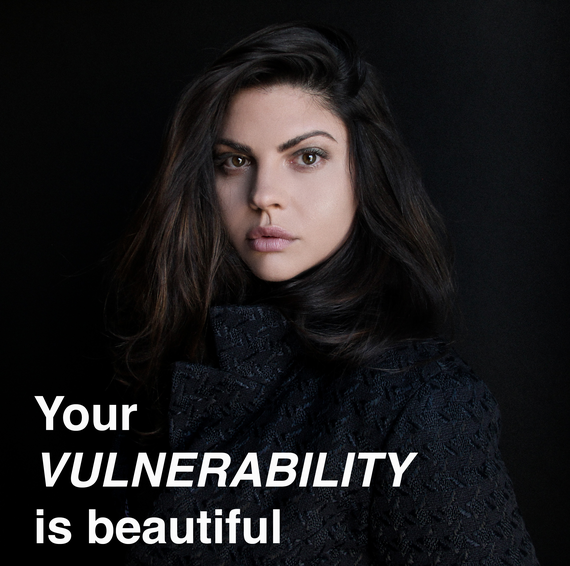 The key to connecting with your audience is vulnerability. Self-proclaimed "Shame Researcher" and TED phenom Brené Brown gives an amazing talk on this topic, "The Power of Vulnerability." If you haven't seen this video yet, drop everything and watch it immediately! In her research, Brené stumbled across the three keys to success: courage, compassion and connection, all of which hinge on the willingness to let go and be vulnerable:

"These folks had, very simply, the courage to be imperfect. They had the compassion to be kind to themselves first and then to others, because, as it turns out, we can't practice compassion with other people if we can't treat ourselves kindly. And the last was they had connection, and -- this was the hard part -- as a result of authenticity, they were willing to let go of who they thought they should be in order to be who they were, which you have to absolutely do that for connection. The other thing that they had in common was this: They fully embraced vulnerability. They believed that what made them vulnerable made them beautiful."

In order to succeed, you've got to put it all out there, and share all the parts of you with the world, not just the ones that are left when you cleanly tuck all the messy stuff behind the veil. It's not just about getting recognition, it's about allowing people to feel a sense of connection with what you're creating, because that is where impact happens -- when the messy parts of the creator and the messy parts of the audience collide, over the piece of art that was created to put those messy parts before the world.

It's hard to open up and make yourself vulnerable by showing the world who you really are. To say, "Yes, this is who I am, and this is what I made for you." But doing so is the only way to make a real impact. Lean in to those uncomfortable feelings. Show us who you really are!