I'm really sorry to be the one to break it to you, but if you are married and it's Valentine's Day there's almost nothing you can do to win it. I don't know why exactly this is, and I hope you don't shoot the messenger, but I just don't see it going well for you. Sorry.

I don't know where it all went wrong. We both used to like romance. I'm not trying to put the blame on either partner, because Valentine's Day is hard when you are married. It's like the ultimate in suspending disbelief. I think we can smell the desperation on both our parts when we try to set our no-boundary marriage aside for one day and pretend we didn't see you that one time hunched over naked cleaning up the dog's throw-up, or you didn't see us that one time when that baby plopped out of our body. 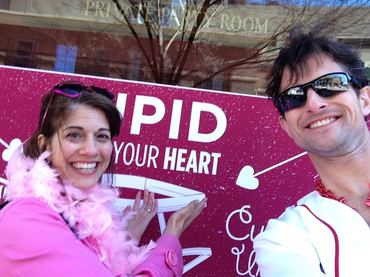 And yet, regardless of how stupid it is, on this day, we set aside our mutually shared advanced feminism, ignore our disdain for gender-specific roles, and give into the idea that the man is going to do something romantic for the woman. I'm not proud of this. And so, it begins...and shortly ends, badly.

Here's the crazy part about you not being able to win...we know you are trying. We really do. We know you have given it some thought. But, let's be honest, not because you are super psyched to romance us by unleashing your inner Romeo, but rather out of fear you will completely screw it up. Because the truth is, Valentine's Day is basically a calculated wager, but you're such an underdog, you know it's a spread you can't cover. And you are smart enough to know that there is no such thing a "push" on Valentine's Day.

If it makes you feel better, you're not alone. Historically, there have been three men who have gotten it right. One was a caveman. The hieroglyphics detail how his elaborate plot to get is wife to have sex with him in winter led to the invention of fire. Hey, we get cold. The second was actually Oprah Winfrey taking her gal pal Gayle King to a spa on the coast of Spain. Oh, I know, this probably shouldn't count, but you should know that most women don't fantasize about some dashing, sexy lover. What they really want is Oprah for their best friend. And the third guy? Just a dude from Cleveland who accidentally got it right and, despite years of trying, has never, ever been able to recreate the exact, favorable conditions again.

Here's where it gets complicated...the traditional options are all traps.

Roses: You get a dozen roses delivered on Valentine's Day. Perfect. Right? Wrong. She knows they cost $150. You just lectured her about her $3.74 lattes since you started obsessing on Mint.com, aka the opposite of an aphrodisiac. And everyone knows roses only count if given on Valentine's Day. Ridiculous, yes. But I don't make the rules.

Romantic Dinner: Much like roses, all restaurants are overpriced on Valentine's Day...you're damned if you do, damned if you don't. And to pull off dinner on the 14th, because it's usually like a Tuesday, your wife has to arrange two play dates, four carpools and get a Brazilian wax. Somewhere in between reorganizing the lives of your collective children and having hairs ripped out of her nether regions, she's oddly not in the mood for love. Go figure.

Chocolates: Come on. Sugar? Think! Isn't that the thing she detoxes off every third full moon? And if you buy her a cardboard box from CVS I just hope you are doing it ironically. If not, I'm calling the suicide prevention hotline because you clearly have a death wish. Give it to her still in the plastic bag from the pharmacy and you get put on 24-hour watch. Don't you want to live?

Lingerie: Oh boy. I applaud your bravery. Really. You should get a Purple Heart in Marriage. But, you know it's not gong to go well, right? Like at all. Unless your wife is a Victoria's Secret model or a nymphomaniac, which in both cases, means this blog does NOT apply to you. Here's the trouble... Too slutty. Too sensible. And then there's the size. Too small, you make her feel fat. Too big, you are saying she's fat. My advice on this one...skip the lacy stuff and save yourself the equivalent of that Seattle Seahawks' final pass in the Super Bowl...the worst play ever. 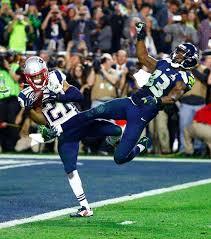 Jewelry: Every kiss does NOT begin with Kay. Every "Are you cheating on me?" begins with Kay. It seems a little over the top after all these years of marriage. What are you trying to prove? All you needed to do was get flowers. Which we both know is a bunch of BS. I've got your back on that one.

Okay. Maybe try something non-traditional. How about writing her an original song and performing it on your acoustic guitar? Oh, wait. That Ed Sheeran dude doesn't have a girlfriend and wrote an entire song about some woman cheating on him. And I just remembered that Chris Martin of Coldplay wrote songs for Gwyneth Paltrow and we all know how that consciously uncoupled in the end. Yikes. Things are worse than I thought.

But all of this begs the question: Why, in this world of equality in marriage, are you the asshole who has to jump through the mind-reading hoops of Valentine's Day? Why isn't she scheming up ways to show you her love and make you want to do it?

I have no answer for you on this one except...we got the vote like 144 years after you did. We make 77 cents to your dollar. We get sexually harassed regularly. We have to carry and pass the babies through our vaginas. Gray hair doesn't "distinguish" us. We have to get Brazilian waxes, for Chrissake. So, somehow, in exchange for all that crap, we get to have no pressure on us on Valentine's Day. Life is weird. But this is oddly how it works in our society. And for those reading this who don't relate...good for you! Seriously. Good for you. 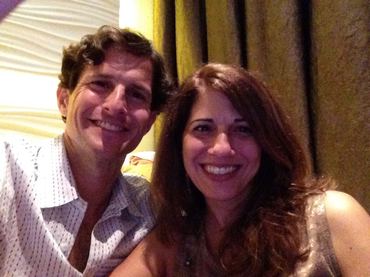 I bet you are wondering....What in the world do women want? Damned if I know, and I am one. But I'm pretty sure it involves a montage set to You Make My Dreams Come True that includes a wholesale flower market and dancing in a rainstorm. And, what in the world do men want? I mean besides that. I'm guessing it involves being alone in your house in your underwear with a Bumstead-stacked sandwich and the remote. Geez. Valentine's Day brings out the worst in gender stereotypes.

Maybe the reason you can't win Valentine's Day is because it's too forced for the married. Like we aren't buying it anymore. Maybe we make a pact and give this one to the single and dating people - let them have Valentine's Day. Wouldn't that be great? The married people could just sit at home in their PJs watching free Netflix movies, while the single and dating people spend all their money trying to create romance. I think it might be the only way we can win it. Happy Valentine's Day, suckers!