I like to think of myself as "normal," if there is such a thing. I believe for the most part 90 percent of the time, I fit in the "normal" category. I'm a stay-at-home mom, I have three kids, a husband who serves in the military, a home, a dog. I take my kids to and from school every day. Other than the occasional speeding, which is also "normal," I follow the laws. Some may call this kind of "normal" boring, and they would probably be right, but it doesn't really matter because I'm content with being boring. 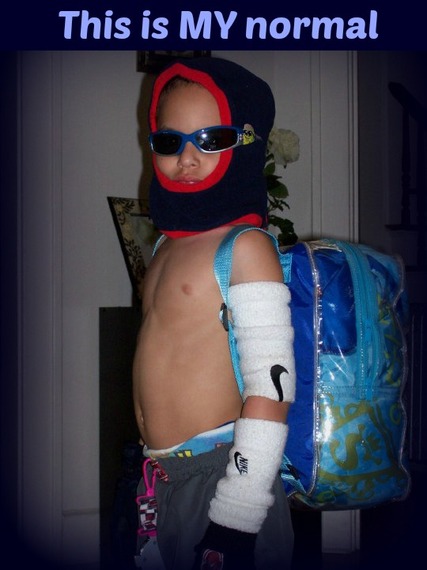 My middle son does not fall into the "normal" category. He has high-functioning Autism combined with ADHD, and if you ask me, he's as "normal" as anyone could possibly be. He's actually made me realize that I'm the one who is not "normal," and if you're reading this, then you're probably not "normal" either. Let me tell you why we're not "normal."

We're not "normal" because as much as we like to tell ourselves we don't care what people think, our actions and even our bodies often say differently. For example, if I go to a movie and something sad happens, I'm going to try with every part of my being not to cry. Not because I don't have the urge to, but because it's kind of embarrassing showing a certain weakness or vulnerability, so I go against what my body is naturally telling me to do and I hold back my tears.

Same goes for laughter, if something is funny, I will restrain my laughter. Not because I don't have the urge to make loud, obnoxious, snorting noises, but because I know I might get a few stares if I choose to do so.

Now my son on the other hand, responds to every signal his body gives him. He will roll into a fit of laughter and doesn't care who hears him. He gets stares and people laughing at him, but he keeps right on going.

His dad and I have to tap his shoulder and remind him to be aware and considerate to other movie patrons, but I should honestly be ashamed of myself for doing so. We do need to instill in him that we need to respect others, but in all honesty, the majority of us sitting in those theatre seats are being phony. We are and not being true to who we are, because we are afraid of what others may think, while this young man is kicking back and enjoying life. 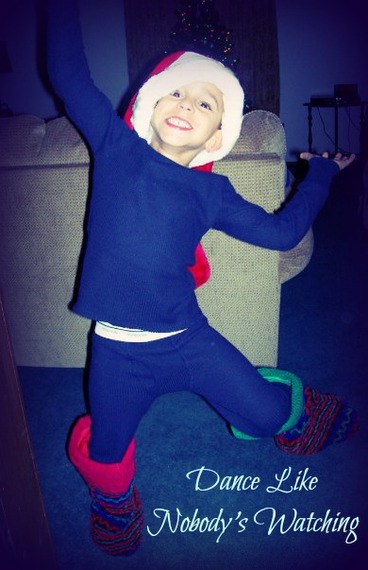 Same goes for dancing, I would never publicly, "dance like nobody's watching," unless I had a little too much to drink and then God only knows what I'd do, and if I did, you can bet your sweet ass I'd regret it the next morning. But my son will dance even when there is no music. He will dance to the music in his head. Why? Because he's free, because he is unaware of what people think of him.

He's beautiful and more importantly, he's true to who he is, more true than I could ever be. And the only time he's ever embarrassed about who he is, is when I have to remind him that "we can't do that here," or when he's drawing eyes that look at him like he's crazy.

I remind him not because I want him to stop, or because of what people think of him; I remind him because I am afraid of how he will be treated. I want to protect him and shield him from the mean eyes and comments others make. I do not want "normal" kids to bully him or make him feel weird. So in order to protect him, I have to teach him to be "normal." Not for his own good, but because I am a coward and so are you.

But I'm not going to do it, I'm not going to change his innocence, his lack of inhibition, his realness, his "normal." I'm gonna change me instead because the truth is, me being so "normal" is the problem.

Think about it, if your boss puts a pile of paperwork on your desk and says have it back to me in one hour, which is an impossible task and not to mention you now have to drop everything you are doing. He walks out of the room and everything in you wants to SCREAM, but since you do not want him or anyone else to hear you... You do not. Instead, you curse him under your breath and then vent to your co-workers or significant other later, about what an ass he or she is.

When my son's teacher does the same thing and puts a pile of paperwork on his desk, he cries. He cries so loud the whole class hears him. He cries because he's frustrated and overwhelmed. He gives a natural response; he's true to how he feels. He might not be able to verbally express his frustrations, but he's real.

Yes, you can go on about our diet and how it sucks, and how we're nothing but fat, spoiled Americans. But the truth is it's because we've had so many years of being "normal." Holding in how we feel, playing into society's expectations of what we should be and how we should act. Holding everything in until it comes around full circle and bites us in the ass, and says you have heart disease, or high blood pressure, or cancer, or whatever else. So really how "normal" is that? Our own body tells us we're wrong.

Even now, my normalness makes me worry about being "normal." I'm writing something that I plan to share with others... will they think it's dumb? Will they think I'm dumb? Should I just keep this to myself to spare the harsh judgment? How many times will I re-read this to make sure I didn't make any mistakes? I know the grammar police are waiting, so did I make any errors? Which by the way, I did because I'm writing this like I'm telling a story, which I am, which isn't always grammatically correct and the fact that I felt the need to tell you that, so you know that I know there are grammar errors makes me one fucked up "normal" person.

You may be wondering by now, why I've written this long novel. The truth is, it's not to put anyone down for being what they've been pre-programmed to be. I'm writing this to protect my son because he wasn't wired the same as you or I, and I truly thank God for that. He's beautiful, he's perfect, he's more than I could have ever dreamed of! I'm also writing this to ask a favor of you and myself for that matter.

April is Autism Awareness month so "LIGHT IT UP BLUE" 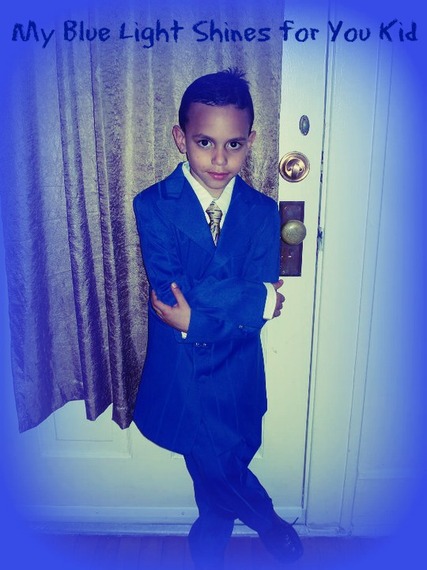