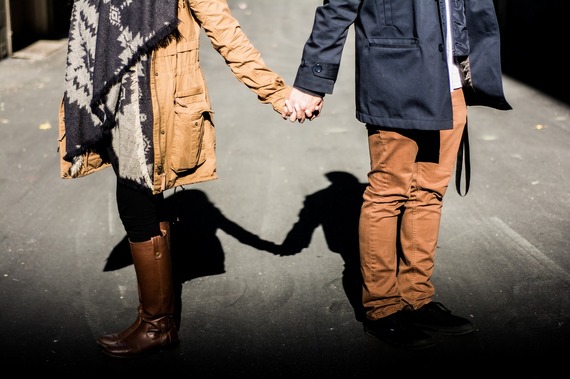 "All happiness or unhappiness solely depends upon the quality of the [person] to which we are attached by love." -Baruch Spinoza

Meet Steven. Steven has decided to become a psychoanalyst. Before starting class, the graduate school requires students to spend a year in therapy.

Six months in, Steven was doing well. He showed signs of a healthy and stable mind. So much so that his assigned therapist believed he wouldn't need more than a few years, compared to other students who need an average of four.

Then he met Leah. He fell in love within a matter of weeks.

Leah, an aspiring actor, was beautiful. But she was toxic. She sent mixed signals about committing to a relationship, leaving Steven unsettled. Two months into the relationship,Steven's behavior began to change entirely.

Every 20 minutes Steven would check his cellphone to see if she had answered his text, Facebook messages or his emails. He began to miss deadlines for his job in programming. He started to spend an extraordinary amount of time chatting with Leah in a popular online chat room... under a fake profile.

He was obsessed. It was ruining his life.

Steven's therapist was dumbfounded. How could his most promising student transform into his worst? Steven's behavior started showing borderline masochistic personality traits.

A Masochist or Just Sensitive?

Our environment sculpts the type of person we become. Without computers, there would be no programmers. Without cars, there'd be no Uber drivers. Humans, by our very nature, are adaptable.

Our relationships with our parents give us a blueprint of how our adult relationships should be. They influence how we believe ourselves to be and what we deserve in love when we start adulting.

In his relationship with Leah, Steven lives in a constant fear. He feels like he was walking on a tightrope without a safety net, anxiously floundering to keep his emotional balance. Endless cycles of anxiety with only rare moments of peace and security.

A relationship that creates an anxious person is a relationship with one unavailable partner who behaves in ways that avoid closeness. This behavior is toxic for the anxious partner, and consumes them in a tsunami of thoughts that all point to the same goal: how they can reestablish closeness with their partner.

If your partner responds to you in a way that reestablishes security in your relationship, you become calm and go back to watching cats freaking out to cucumbers on youtube. But if they don't, you literally cannot function without the reassurance that the relationship is okay.

Steven's obsessive thoughts, feelings, and behaviors were driven by the fact that Leah was unavailable to him, although he may have felt it was just part of love.

Despite all his insecurity and anxiety, Steven, like many others, had a difficult time breaking up with his toxic lover. He was drowning in common beliefs sensitive people have: believing that she would change, or that every relationship has similar problems. It took a year for him to find the self-respect to call things off for good.

Why We Love Toxic Relationships

Isn't it odd that partners who fiercely guard their independence seek partners who most likely invade their autonomy? Why is it that people who crave closeness in a relationship are attracted to people who push them away?

Each strategy complements the other because it reaffirms the other's beliefs about themselves and relationships.

So, in a strangely unhealthy way, these pairings are attracted to each other because they reinforce the familiar script of how they believe love should be.

In Steven's case, the subtle indicators of uncertainty and unavailability made by Leah made him feel insecure. This is typical. The anxious partner gets mixed signals. The avoidant partner calls, but takes his time doing it. He shows he is interested in you, but makes sure you understand that he's not committed to you.

You are left guessing.

Every time you get a mixed message, your attachment system is activated and you become obsessed with the relationship. But then your partner compliments you or makes a romantic gesture that makes your heart flutter and you tell yourself that they love you.

But the bliss is about as quick as a kid blowing out candles on a cake. The positive messages quickly become ambiguousness.

You find yourself twisting and turning down an unforeseen roller coast. You began living in the suspense of the next small gesture that will give you the reassurance you desperately crave.

Eventually you start to confuse the anxiety, the obsession, and those ever-so-short bursts of affection with love. Your attachment beliefs make you so desperate to make the relationship work that you unconsciously confuse a constantly activated attachment system with passion.

If you've had these relationships in the past, you become programmed to be attracted to those individuals who are least likely to make you happy. Studies show that people with negative self-views tend to be attracted to partners who mistreat them and undermine their feelings of self-worth.

Having a partner undermine your self-worth is not the love nature intended.

Even Abraham Maslow argued that human beings need a secure foundation of love and affection to reach their full potential. For that to happen, you must be in a calm and secure relationship.

True love is a calm lake. Even though disagreements make cause some ripples, the water will always find a way to settle.

Had Leah been available to Steven, his insecurities would have been removed the moment they started. Her availability would have prevented them from escalating out of control.

If you're single, the best option is to date a secure person. They change your beliefs by providing you the reassurance you need, preventing any hardships before they happen.

Unfortunately, our beliefs tend to prevent us from being attracted to such healthy lovers. They feel dull and boring because their views of other people don't align with our views of ourselves.

The second and most promising way for those who are single or in a relationship is to find a relationship coach or therapist who thoroughly understands attachment theory. They'll help you deconstruct toxic beliefs and build a foundation of secure relationship skills that will cultivate healthy and fulfilling relationships.

Let's check up on Steven.

Two years later and learning a lot about his attachment tendencies, Steven finds himself in an amazing healthy relationship. That relationship enabled him to return to his resilient self.

We often seek relationships that provide us with the feelings that confirm our self-views and run away from those that do not. By being unaware of your attachment beliefs, you risk suffering a great deal in relationships. You are only as troubled as the relationship you're in. So choose your partner wisely. Your happiness depends on it.

This was orginally published on KyleBenson.net

For more ideas on how to improve your relationships, sign-up for my free weekly newsletter and I'll send you a gift, The Popular Passionate Relationship Toolkit.

Other popular articles by Kyle Benson on The Good Men Project:
The Story Of Us: The Difference Between Happy & Unhappy Couples
Your Soulmate Will Always Cause Problems
Marriage Struggles: The Partner With The Least Desire Controls Sex
If Love Requires Work, Was It Meant to Be?

More:
divorceLoveRelationshipstoxic relationshipsattachment
Newsletter Sign Up
A weekly guide to improving all of the relationships in your life
Subscribe to HuffPost’s relationships email
Successfully Subscribed!
Realness delivered to your inbox