Unless you have a separate freezer set to an ideal scooping temp—that would be four to five degrees F—you’re probably keeping your ice cream with the rest of your frozen foods, at around zero degrees. That’s great for storage, but it’s too cold for scooping in most cases (the high butterfat and lack of air in most good-quality ice creams make them very hard at zero degrees). Even if you do manage to extract a scoop, it’ll be so cold, you’ll hardly be able to taste the flavor, says Michael Palmer, co-owner of McConnell’s Fine Ice Creams in California.

So, we know we need to soften the ice cream, but here’s where many of us go wrong: We let the pint thaw on the kitchen counter. This results in ice cream that melts around the edges of the container but that stays rock solid in the middle. It’s nearly impossible to serve a neat scoop of such varying textures. Instead, advises Shiho Yoshikawa, co-owner/chef at California’s Sweet Rose Creamery, transfer the ice cream from the freezer to the refrigerator about 10 to 20 minutes before you want to serve it. Tempering this way will help it warm up evenly. And you’ll want to factor in the flavor, as well, says Molly Moon Neitzel, founder and CEO of Molly Moon’s Homemade Ice Cream in Seattle: Chocolate will need a head start since it takes longer to thaw than, say, vanilla (which contains alcohol from vanilla extract) or salted caramel (the salt stops the other ingredients from freezing fully).

How do you know it’s ready? Bella Loggins, McConnell’s director of retail operations, says you should be able to scoop the ice cream “without having to fight it aggressively”—though it shouldn’t be as soft as room-temperature butter.

Though scoops with a release lever may look fancy and fun, every professional we talked to prefers a one-piece model because it’s sturdy and uncomplicated to clean (Loggins calls them “indestructible”). The gold standard: Zeroll. Its main selling point is that it contains a heat-conductive liquid in the handle, which uses the warmth of your hand to make it a breeze to scoop and release the ice cream. Tyler Malek, co-founder and head ice cream maker at Salt & Straw, which has multiple West Coast locations, is also a fan of these scoops because of their shape. The blade is slightly sharp, which gives a clean edge to your scoops, and makes for an easier entry as you dig in. They come in a variety of sizes; the standard is four ounces, which yields about a five-and-a-half-ounce scoop of ice cream. The only caveat: You must handwash these scoops.

You’ve probably seen employees at ice cream parlors dipping their scoops into a container of water between orders. The reason for this move isn’t to wipe off any residual chocolate before they dip into vanilla, or to somehow warm the scoop. Instead, it’s because ice cream won’t release from a dry scoop—it’ll stick. Keep a bowl or cup of cold (not hot!) water nearby and give your scoop a dunk and then a light shake before scooping, so it’s damp but not dripping, to ensure that the ice cream will come neatly off the scoop.

Finally: The ice cream is the perfect temperature and your one-piece scoop is lightly dampened. The only thing left to do is to get that deliciousness out of the cardboard and into your cup or cone. Envision the container as a clock, and insert the scoop at 12:00. Then, apply gentle downward pressure and move clockwise around the edge, towards 6:00 (counterclockwise if you’re a lefty). Lift up the scoop and repeat this action two to three times (more than that, and the scoop will start to dry and it’ll be difficult to release the ice cream, say the pros), until you’ve got a compact ball of ice cream with minimal air pockets.

Once everyone has their dessert, you’ll want to pop the container back in the freezer as soon as possible so you can enjoy it again tomorrow. If, however, you’ve left it out for awhile and it’s now on its way to being truly melted, don’t refreeze it, since when you refreeze melted ice cream, the texture changes—for the worse. What was once smooth and creamy will turn grainy and crystallized. “Once you do open a pint, we encourage you to consume the whole thing,” says Palmer. Well...if you insist. 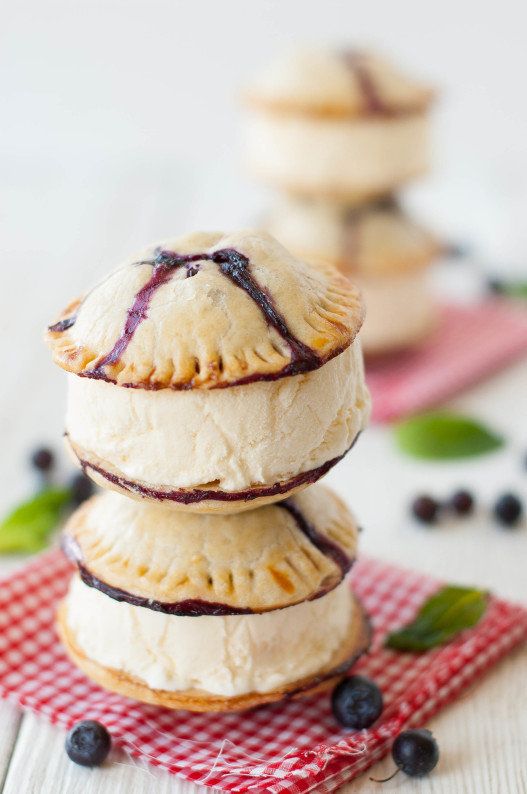 1 / 9
Mini Blueberry Pies. Seriously.
This is a la mode meets genius. Plus, the cute factor is overwhelming.&nbsp;<strong><br><br>Get the <a href="http://thekitchenmccabe.com/2014/07/02/blueberry-pie-ice-cream-sandwiches/" target="_blank">Blueberry Pie Ice Cream Sandwich recipe</a> from The Kitchen McCabe</strong>
The Kitchen McCabe