The inconsistencies in how we manifest pride are baffling. At the local pub, a man's prideful exclamation, "the next round's on me!" is met with cheers. However, we could hardly imagine a similar scene playing out in a shoe store or at a cell phone retailer, even though the hurrahs would be just as hearty. Pride is a powerful driver of actions and behavior; it does us well to consider how we come under its influence with our life choices, particularly when it comes to feeling proud of being sleep deprived.

When we take out time of our busy schedules to exercise, we feel better physically and feel a literal healthy pride in sacrificing to improve our bodies. We may even indulge in (a slightly less healthy) pride by lording it over our slacker friends who are not paying the price at the gym. We feel a similar sense of pride in accomplishment, and perhaps smugness too, when we're eating right and controlling our intake of calories. If we fail in keeping a diet that our friends know we're trying to follow, we feel embarrassment if not downright shame. Eating 50 hotdogs in a sitting doesn't garner cheers but disgust anywhere outside Nathan's Famous Eating Contest. For many of us, it's disgust even there.

But when it comes to sleeping, well established to be as important as exercising and eating right, the story is much different as our pride gets turned upside down. We're proud of our sleep deprivation, known to cause over 1,500 car deaths annually in the U.S., to impair attention, alertness, concentration, reasoning, and problem solving, to make learning more difficult, to increase our susceptibility for heart failure and diabetes, to reduce interest in sex, to increase weight and to impair judgement, among a host of other ills. Sound like things worthy of being proud? Not.

Yet we've all met the person who wears self-imposed sleep deprivation as a badge of honor. No matter how little sleep you got, he or she got less. We're surrounded by so many of those hard-drivers that we feel cowed into conforming lest we suffer shame for getting a decent amount of sleep. Margaret Thatcher famously had "sleep is for wimps" as her motto. Statistics say that most of us, sadly me included, end up going through many of our days on too little sleep, stumbling through in a sub-optimal state. After all, we've got to keep up and get it done, right? Never mind that research indicates that loss of sleep reduces innovative thinking and flexible decision making, as though we needed research to confirm what we've all experienced at one time or another. Warren Zevon's 1996 song sums up our modern view: "So much to do, there's plenty on the farm. I'll sleep when I'm dead."

Unfortunately, that perpetual state of sleep is hastened by not getting enough of the transient kind each night. Findings published in the journal Sleep in 2010 of a meta analysis of studies which included 1.3 million subjects followed over some 25 years clearly showed that people sleeping fewer than six hours per night were much more likely to die prematurely. It reminds one of the Fram oil filter commercials of the early '70s: "You can pay me now, or pay me later."

We need to get pride re-aligned as a force for good regarding sufficient sleep. The shame needs to be felt when we're not well-rested enough to avoid dozing while driving. The blue ribbons should be handed out to those keeping their bodies running well to reduce the burden on our healthcare system. Getting sufficient sleep needs to be perceived as what successful people do. It deserves to be cool. I was heartened to learn that Lebron James and Roger Federer self-report sleeping 12 hours each day, with Venus Williams and Maria Sharapova logging 10 hours. I like that these cultural idols aren't ashamed to say they sleep a lot.

Even those of us with pocket protectors can recognize that King James is way cooler than the Iron Lady.

So let's make the sacrifices to do our bodies well and feel proud of sleeping right in addition to exercising and eating a healthy diet. Besides being cool, you just might get to feel a bit smug too. 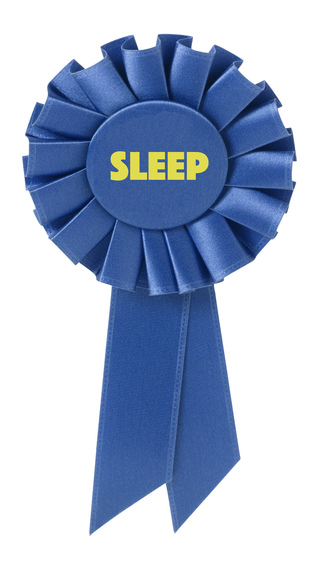