I am (a fake) blonde and have large breasts. I am also a writer, employed and pursuing my Master's. I'm half Mexican, have two dogs and usually show up to work sweating. I am often convinced I have a mustache. Sometimes I eat entire pizzas by myself. I have a strange and delusional fear of getting dosed with LSD.

These are things that make me "me." These are all things that have nothing to do with each other. Right? Right.

Since we agree, please do us all a favor and remove the phrase, "You're smarter than you look" from your vocabulary.

I hear it all the time. "You're so much smarter than you look." I have yet to determine whether I look like an imbecile or am actually intelligent; I assume it's the former.

I never associated appearance with intelligence. After all, I was raised in Los Angeles, and I only knew attractive people. (Just kidding! Sort of.)

I grew up admiring my grandmother -- the ultimate manifestation of beauty and brains. My grandmother is a very successful businesswoman as well as proud owner of a shoe collection so impressive it would shame Carrie Bradshaw all the way to Queens. Her constant nagging was a staple of my childhood -- I didn't (and don't) wear enough "rouge."

Well, when she was written up in a world-renowned business magazine a few months ago, they breezed over her remarkable contributions to the business and marketing world and diverted the piece to focus on her gracious hosting and flawless mascara application. Mind you, this was in a business magazine. Not Glamour.

This is nothing we're not used to.

I spent the entirety of my formative years living in constant torment and agony as a result of my appearance.

In middle school, fellow classmates berated and teased me about my bra size. Some girls took photos of me when I wasn't looking and posted them to their LiveJournals. I was the girl with really big boobs. Boys fondled me, girls tore off my pants in the hallway, boys teamed up to take off my shirt on the bus once on our way back from community service.

The school principal told my mother that the bullying was my fault.

"Maybe she shouldn't wear so much makeup."

A few years later I was sexually assaulted. I was also blamed for that. Because I wear makeup, because I'm a girl, because I look the way I do and don't feel the need to hide it.

I'd like to think that the one thing that can't be taken from me is my brain.

But I was unpleasantly greeted by a strange form of same-sex sexism when I began my undergraduate career at prestigious, competitive and outright pretentious liberal arts college.

The school was sort of like a nineties high school movie flipped on it's side in an alternate universe. Everyone dressed the same -- think Randall from Clerks. It was like an acid-infused rustic jungle rampant with overmedicated, flaccid lit majors and their miserable, undyed-virgin-hair-having, perfect straight-across-bang-strutting-clog-wearing female counterparts.

(I believe there's a term for this now. 'Normcore.' Buzzfeed told me that.)

There was a group of kids my friends and I called the "Literati." My off-and on-again hipster douche boyfriend was a member. He is the most infamous "Woah, you're smarter than you look. I only wanted to hook up with you 'cause I thought you were a dumb slut." (True story. Romance.)

The Literati was cool. They liked poetry. They discussed philosophy. They were angry and brooding and took Ancient Greek. My friends and I, however, were sort of a mismatched group of girly girls who found each other in the hall of our party dorm -- we really liked boys, we really liked drinking and we really loved blasting Miley Cyrus (Yes, pre #BANGERZ) in our dorms and jumping on our beds.

What people thought of this behavior became very apparent when I began dating my Literati boyfriend. People couldn't believe "he was dating someone like me." We "didn't make any sense together." People asked what we talked about. What did we have in common? Did I even read books?

I was seriously asked if I read books. No, I'm a Literature major. I do not read books. I am writing my thesis on Listicle Theory.

My Literati boyfriend begged me to wear less makeup, more sweaters and dye my hair back to brown. (Yeah, he hated my blonde.) I started to listen. I also developed a very intense addiction to benzodiazepines around this time. Clearly, I was not doing well.

My Literati boyfriend trained me to "look smarter." Contrary to popular belief, my hair color did not affect my intelligence. It did affect my happiness, though, and I am very gratefully back to blonde.

People still tell me that "I'm smarter than I look." They are usually impressed that I have read one book. And they are genuinely surprised when my Tumblr (lots of sparkles and Britney Spears) is mine while DANKE MAG is as well.

I subconsciously recite my resumé and accomplishments to everyone I meet. I cling to my qualifications and GPA, for they are the only thing that will separate me from being "just a girl." My LinkedIn profile is plastered with glimmers of hope -- one girl's impressive resumé is one man's clean slate, and mine is the key to traversing the line into "equal to."

We aren't smarter than we look. We're just very smart.

And you look very dumb for thinking like that. 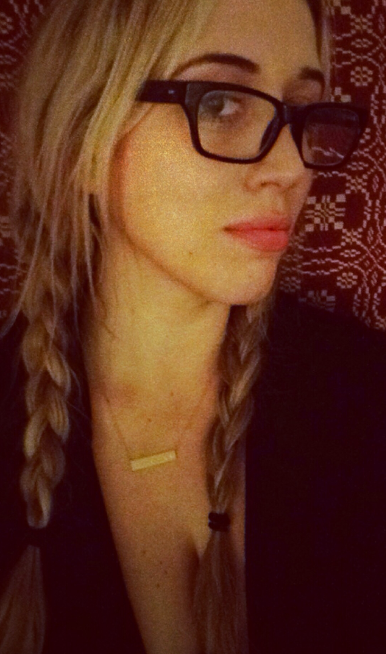