This year's Little League World Series has featured many exciting story lines. From Mo'Ne Davis' shutout to Cumberland manager, David Belisle's, inspiring speech to his players, there has been much to celebrate during Little League's 75th anniversary. However, one thing is certain: Without baseball equipment to play with, the stories unfolding on the baseball diamond this summer would not take place.

In recent years, much has been made of the soaring costs of youth baseball participation, driven largely by the growth of popularity of travel teams. While the cost to join a Little League team is minimal at $16, that dollar amount doesn't factor in the additional expenses a parent incurs so that their child can play baseball. These costs include cleats, gloves, baseballs, bats and apparel and can also expand to include things like private coaching instruction and clinic fees. Over time, the costs add up and in turn, hold some kids out of participating in the sport. A 2014 Wall Street Journal study found that between 2008 and 2012, baseball participation by youths between the ages of 6 to 18 declined by 7.2-percent.

With the costs of baseball soaring and participation in America's pastime declining, one man has set out to give children around the world an opportunity to enjoy baseball by providing them with free baseball equipment. In 2005, Pennsylvanian David Rhode founded Pitch In For Baseball. Heavily involved in coaching his sons' baseball teams, around 2005 Rhode had just sold a business and was looking to do something meaningful with his life. Sorting through his house one day and seeing the extensive amounts of baseball equipment scattered through its closets, corners and garage, a lightbulb went off in Rhode's mind: What if he could take the equipment and give another a child a chance to play baseball with it?

I knew there had to be millions of other people in the same situation as me -- with closets, corners and garages filled with equipment that had accumulated over the years. The thought I had was simple: I wondered if there were other people who needed stuff like this. I knew of a gentleman who was collecting baseball gloves for children in Poland. I told him I liked what he was doing and asked for his permission to take his idea a few steps further by collecting all types of baseball equipment and sending it to kids around the world.

With his idea set and a background working with consumer packaged goods at Procter & Gamble, Rhode was ready to launch a foundation that over the last nine years has distributed over $3.5 million worth of equipment to over 250,000 children spread across 80 countries. Going into the venture, however, Rhode and Pitch In For Baseball had some important hurdles to cross.

We had a bunch of basic questions we had to answer, the first one being how people would feel about receiving gently used gear. I had concerns, given the prideful nature of many people, that this was an issue that had to be dealt with carefully. Thus, we decided to be very careful to make sure people understood our definition of 'gently used' as being something they'd feel comfortable giving to a friend or family member as a hand-me-down. We wanted people to take some care about thinking of the things they donated.

While Rhode had grave concerns regarding the quality of gear people donated and the reactions of those who received it, those concerns were quickly erased. "Once things were shipped and received, this concern went away immediately. People were thrilled with what they got. They couldn't believe that someone was so thoughtful," Rhode said.

The first donations Pitch In For Baseball made served as a powerful indicator of the foundation's ability to improve the lives of others by providing baseball equipment.

The first donations we made were to communities impacted by Hurricane Katrina. Our first board meeting was held three weeks after Katrina hit. Our focus then was trying to figure out if we could or should play a role in this type of disaster, or if we would stick to our original vision of helping kids around the world. We realized, though, that there was so much emotional connection to the communities impacted by Katrina, that it was a logical place for us to start.

Since then, Pitch In For Baseball has been repeatedly involved in disaster relief efforts by sending baseball equipment to teams and individuals who have lost everything as a result of a natural disaster.

We helped seven different leagues in Galveston, Texas after Hurricane Ike that all lost everything. Through our contact with them, we realized they needed equipment and uniforms. It also happened that they needed socks. We provided them purple socks and in the way that we ended up packing everything, it ended up that the purple socks were on the top of the box. A woman was the president of the league. She later expressed to us, that when she opened the box, she knew that everything was going to be alright, because it turned out that purple was the team's primary color. There were tears coming down her face as she told us that those purple socks were proof that people cared about their community and their needs. It was symbolic to her that everything was going to be ok. 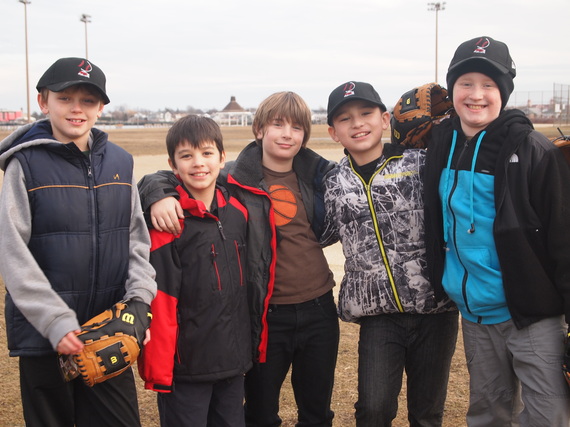 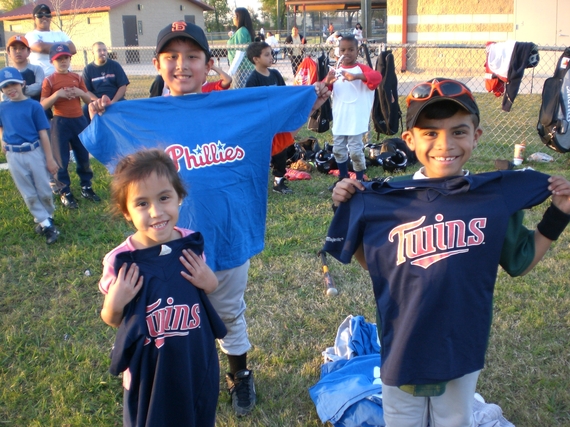