In these, the days of smart phones and personal computers, some are worried about Internet addiction. Could they be right?

The Retrevo Gadgetology Report examined data from 1,000 Facebook and Twitter users to see 'when, where, and how much time they spend on [their social media accounts].' According to the report, the individuals were 'distributed across gender, age, income and location in the United States.'

The study found that almost half of users under the age of 25--and 27 percent of those over 25--allow social media updates to interrupt meals, and that 11 percent admit to checking updates during sex (6 percent of users over 25 do the same).

Retrevo writes, "With everyone texting away on their phones these days, we weren't surprised to see over 40% of respondents saying they didn't mind being interrupted for a message. Infact, 32% said a meal was not off limits while 7% said they'd even check out a message during an intimate moment. "

While the scope of this study is fairly limited, the results seem to echo recent findings that estimated 15 percent of Americans have interrupted sex to answer a cell phone call.

Retrevo also found that iPhone users seemed, on the whole, to be more social:

We don't know if it's the device making it so easy to do social media things or the personality of an iPhone owner but iPhone owners stand out in this study as more involved with social media; they use FaceBook and Twitter more often and in more places.

Check out a highlights from Retrevo's social media survey below, or see the full findings here. 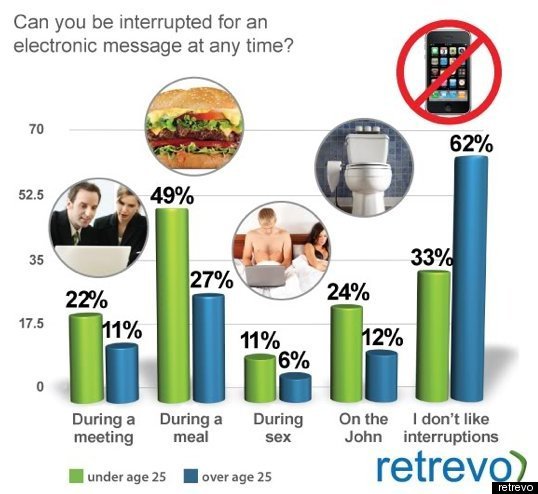