Young people have taken it for far too long. The exploitation of my generation began quietly with brutal standardized testing and increased rates of childhood poverty. It crescendoed with raising university tuition prices until, by the time we graduated from high school and college, the stage was set for the grand finale. Out paraded the employers and corporations claiming that all they could offer us were jobs that paid minimum and low wages.

Through the chorus of resigned sighs, just as the curtain seemed to be closing on our generation's assumed fate, emerged the Fight for 15 social movement.

Fight for 15 is a movement led by service workers, activists and young people who are doing whatever it takes to change the social and economic reality that most in my generation have come to accept. The movement's demands are straight-forward, 15 dollars an hour and a union. The tactics to get there have involved massive strikes and protests, like the nation-wide strike planned for April 15. Achievement of these demands and the resulting movement will have an enormous impact on the lives of workers and, on the lives of young people as a whole.

Chris Ellis, a 26-year-old McDonald's worker in Pittsburgh, has been working in fast food since he was 15. In those years, his managers have forced him to come into work sick, threatened to fire him for organizing and told him to use pickles to heal a burn he got on the job. What does Ellis earn for all of this? Around $7.25 an hour. This wage is barley enough for Ellis to buy food, pay rent, pay child support and try to build up his savings. A co-worker of Ellis echoed the sentiment held by Ellis and many fast food workers, "We're unappreciated and underpaid for the things we do."

Ellis wasn't content with the poor working conditions and poverty wages McDonald's offered. Rather, Ellis joined the Pittsburgh chapter of Fight for 15 and started organizing. "I believe that being part of Fight for 15 it's our time to stand up and let corporations know that being underpaid, under-appreciated and them putting us in poverty isn't right," says Ellis. 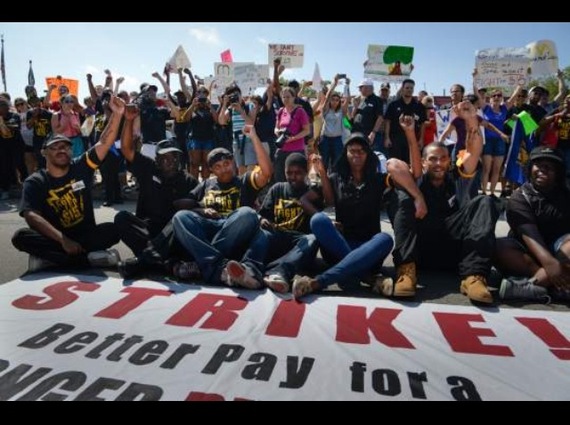 Ellis on the left with members of Pittsburgh's Fight for 15.

Young people like Ellis make up a large portion of workers organizing in the Fight for 15 movement. This is due both to young people's enthusiasm and their overrepresentation in low-wage jobs. People under the age of 25 make up one-fifth of hourly paid workers yet represent half of those paid the federal minimum wage or less.

"Young people who don't always have a degree like myself, where do we get our work? Fast food is usually the answer," says 23-year-old Thomas Raglin, a former fast-food employee and current union worker with 32BJ, who now works for Sodexo at the University of Pittsburgh. "However the minimum wage in Pittsburgh is $7.25, you can't do anything with that. You were working to be broke."

Minimum and low-wage jobs are an economic reality that doesn't bypass those with college degrees either.

Josh Luther graduated from Temple University in 2013 with a degree in political science. Upon graduation, Luther had hopes of working in municipal services or research. The reality? "I've been working at a call center for the last three years making nine to 12 dollars an hour," Luther explains.

This experience isn't unique to Luther. "I don't know anyone who is doing a job in their field. A lot of people are doing retail," Luther says of friends from his graduating class. In 2014, 260,000 Americans with bachelor degrees were earning minimum wage or less.

Even if a graduate isn't working a minimum wage job, young people's earnings have fallen across all major industries since 2013. The wages young people earn have lagged behind the rising price of goods making it nearly impossible for most young people to buy basic necessities, pay back student debt or save up for a house and car.

"When you get out of school the real world hits you like a bag of bricks," says Raglin.

Aiming to lessen the blow of post-grad life are student organizers like Bemma Juice. Juice, a senior at the University of Pittsburgh, works for Fight for 15 to organize university students to stand with workers and to improve their own prospects after graduation. "This is a step that can be a ripple effect into other sectors. Getting this change made is something that can affect your job and my job in the future," says Bemma. "This is showing that young people have the power to change this."

Juice knows that a student earning $7.25 or even $10 an hour can barely cover living costs let alone the $30,000 dollars that an average graduate now owes in student debt. Students - like workers - need jobs that will help them pay back their student debt and begin healthy, independent lives. If the fast food and service industry raises wages, it will put pressure on other industries to increase pay to more equitable and livable rates as well.

Youth today are hurting. We are feeling the brunt of a recession-impacted economy and self-interested corporate practices. Compared to past generations we are poorer, working for lower wages and incurring higher debts. For most of us, long gone are ideas of owning a car or even moving out on our own. But, we do not have to accept this current reality for our futures.

The Fight for 15 is an opportunity for young people to stand together and assert that all of us - workers, students, educated, uneducated, Black, White, Latino - have the right to a living wage.

"I want to see students stand up for their rights," says Ellis. "Not let the Big Man break their dreams. I want them to fight. If you keep fighting, knowing the fact that you deserve more, you will achieve so much."

I invite you to stand with me and low wage-workers on April 15 to demand 15 dollars and a union. This is our chance to show the strength we have as youth to demand and create a different future for us all.

For more information on Fight for 15 visit fightfor15.org. To see what actions are happening in your city for the strike on April 15 check out april15.org.