NEW YORK -- Every morning Brett Lalli wakes up and spends two to three hours searching for jobs. The 22-year-old has sent out about 50 resumes over the past several months, but has received just one request for an interview.

For a few months after graduating in May, Lalli did have an internship at a marine biology lab, but it didn't pay. She was only able to take that job thanks to her parents' financial support. Now, she's "free loading" at their home in Salt Lake City, Utah, until she lands a full-time, paying gig.

Lalli's acutely aware that her situation has become somewhat of a generational norm. She recently penned a blog post lamenting her status as "an archetype of a jaded, impoverished post-grad" that's the subject of Buzzfeed gifs and episodes of the television show "Girls."

"A lot of my friends are going through the same thing," the self-described millennial said. "It's something that we almost kind of joke about."

Lalli's story of unemployment in the U.S. has an often more violent and dramatic counterpart abroad, as the growing numbers of jobless youth around the world have prompted an economic and social crisis.

"When you look at the global scale of youth unemployment and the global size of the youth population, clearly it can work to undermine global growth," said Nicole Goldin, director of the Youth Prosperity and Security Initiative at the Center for Strategic and International Studies.

"On the social side when you have large cohorts of young people that don't feel they have a stake in the game, and in particular where there are not the social safety nets to help them feel they have a future, you have a real sense of no alternative and that contributes to unrest and criminality," she added.

In the U.S., the crisis is costing American taxpayers $25 billion annually in the form of lost tax revenue and government benefit payouts, according to a recent report by Young Invincibles, an advocacy organization for young people.

"We have a generation that is disproportionately out of work and is very much struggling right now, and it's going to take a significant toll on those individuals but it's also going to be a tremendous cost to everyone," said Rory O'Sullivan, a policy analyst at Young Invincibles and one of the authors of the report.

A variety of factors have contributed to high levels of jobless youth in the U.S., O'Sullivan said. Like most economic downturns, the Great Recession hit the youngest Americans the hardest. It also followed several decades that saw young people getting pushed out of the labor force as jobs increasingly required more skills. Now, O'Sullivan said, jobless youth are in a Catch-22: Employers want applicants with experience, but young job seekers can't get in the door to get it.

The situation is even more dire in parts of Europe and the Middle East. In an analysis compiled for The WorldPost, the International Labor Organization compared youth employment-to-population ratios of advanced and emerging G-20 countries. It found that if France and Italy boosted their numbers to match the ratio in Australia, they could increase GDP growth by 1.4 and 1.2 percent per year respectively. Saudi Arabia could increase its annual GDP by 2.3 percent, and the U.S. by 0.6 percent per year if it reached Australia's levels of employment. 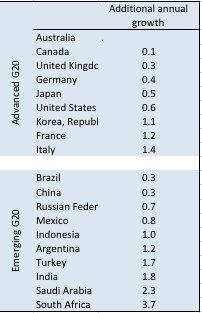 Chart by the International Labor Organization

Jobless young people abroad are also more likely than their American counterparts to take a job in the informal economy, such as the black market, which often means ending up in dangerous or illegal industries, Goldin said. In the U.S., millions of college graduates are forced to take jobs in sectors like retail and fast food -- which means they earn less, and as a result pay less in taxes than they would in a healthy job market, according to O'Sullivan.

Vanessa Tate is one of those people. Over the holiday season, she worked 60 hours a week splitting her time between a Bath & Body Works and a LongHorn Steakhouse in Tampa, Fla. Despite working two jobs, Tate said she could barely scrape together enough to pay her bills, let alone save up or buy Christmas gifts.

"I don't ever want to have to work that hard or that many hours for such a low wage," said Tate, who earned her bachelor's degree from the University of South Florida in 2007. "I have a degree and the fact that I am working so hard at these positions where literally anyone could walk in the door and do it is extremely frustrating."

Tate said her job search has become so stressful that she's considering graduate school, but only at programs that have a high job placement rate. "I'm trying to plan this a little bit better this time around," she said. 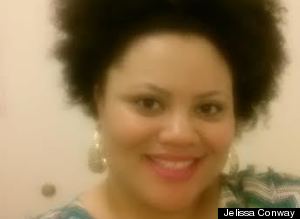 Jelissa Conway has been looking for a job since she graduated with a master's degree in 2012.
Advertisement

But with youth unemployment hovering in the double digits in the U.S., a graduate degree still isn't necessarily enough to get hired. Jelissa Conway earned her master's degree in marriage and family counseling in May 2012. Yet instead of working her dream job helping college students find leadership positions on campus and jobs post-graduation, the 27-year-old drives for an hour to a job in retail that pays $8.50 an hour.

Conway said she's emailed countless resumes, but gotten few responses. "It's so redundant," she said. "I'm sending out all of this stuff, I don't even get as much as a phone call."

Her experience in the dismal job market has made her rethink her educational path and all of the work she put into building her resume with internships, volunteer opportunities and leadership roles in school, she said.