The numbers are dismaying. According to a new US Census report, only 20% of eligible 18-29-year-olds voted in 2014. It was the lowest youth turnout in 40 years, below even 2010's doleful 24%, and the lowest turnout recorded since the advent of the 18-year-old vote. Mid-term youth turnout is always low. But these numbers suggest a generation profoundly disconnected from the electoral choices that will help shape their world.

Yet the decline need not be inevitable. If young women and men are actively engaged by their peers, or by communities and institutions that touch their lives, they respond. The Campus Election Engagement Project, a national nonpartisan effort that I founded in 2008, helps America's colleges and universities use their resources and networks to engage America's 20 million students in elections. We help schools take responsibility for getting their students to register, volunteer in campaigns, educate themselves on candidates and issues, navigate daunting new voter laws, and turn out at the polls. Coaching schools through creative and effective approaches drawn from campuses nationwide, we help administrators and faculty collaborate with each other and with student leaders to make electoral engagement a visible campus priority.

Our results suggest this kind of direct engagement matters profoundly. In 2014, we worked with 280 colleges and universities in 21 states, with a total enrollment of 3.2 million voting-eligible students. Based on precinct comparisons with 2010, when we weren't running the project, we increased student turnout 16% at participating campuses that we could measure, compared to the significant decline in general youth voting. Many of our precincts were so scrambled by redistricting as to prevent valid comparisons, and we couldn't include the commuter schools that were some of our strongest participants. But we were still able to measure a diverse sample. Although our states tended to have closer races with consequent higher participation, our students still faced the same daunting new election laws the same climate of political cynicism, and the same personal doubts as to whether their votes really mattered. 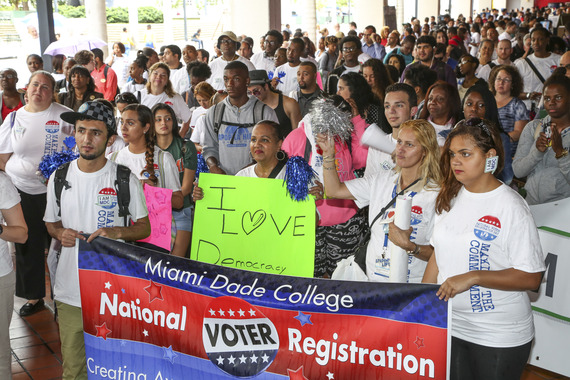 So how do we get students to the polls despite all the barriers? We ask the schools to approach student electoral participation systematically, addressing both practical and perceptual obstacles. Building on classic organizing theory, we reach out through academic networks that the schools already know and trust, taking advantage of existing social networks, so we aren't coming in as outsiders, and building on existing social capital. We help stakeholders collaborate across entrenched academic silos, because it takes a team to act effectively and effective teams reach out beyond familiar boundaries. For instance, we help Orientation Directors register students to vote at first-year orientation, IT staffers help Presidents and Deans email election-related emails and texts, and student leaders and faculty team up to register students in classrooms. We help schools display posters and banners to create pervasive visibility, and organize Parades to the Polls (sometimes led by student veterans) to make voting a community celebration. We've even helped organize football players to hold up their registration cards at half time, while the stadium Jumbotron displays a registration link for the audience.

As gatekeepers for campus resources, administrators, faculty, and staff play a critical role in our project. But student passion and energy matter as well. So we support what we call Election Engagement Fellows, to whom we give training, supervision, and either academic credit or $1,000 stipends. Because most of our Fellows are chronically stretched financially, our support unleashes a huge amount of energy as they recruit and lead volunteer student teams to get out the vote on their campuses. These nonpartisan teams distribute our materials, but more critically, foster the person-to-person conversations that often determine whether their peers vote. They organize debate watch parties, issue forums, conversations in dorms, student unions, and classrooms, run near-professional GetOutTheVote drives. They help create a climate where voter participation becomes the expected norm.

According to the highly respected civic research institute CIRCLE, the new voting laws dampened youth turnout 6% in 2012 and were a likely prime factor in the 2014 decline. They discourage student participation both by erecting multiple hurdles and by creating substantial confusion, so many potentially eligible student voters stay home. We help schools take institutional responsibility for giving students accurate information, convening webinars with the election protection lawyers of Fair Elections Legal Network, and distributing concise voting rule guides for every state we engage. This knowledge doesn't erase the damaging effect of the new laws, but it does partially mitigate it, and similar outreach could help with other constituencies. 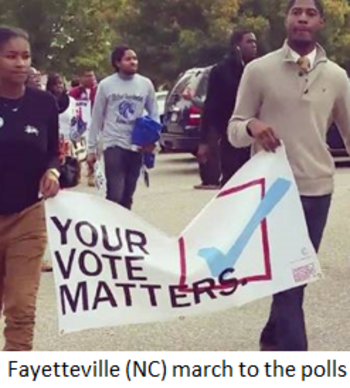 But it's more than the practical barriers that deter students. They also doubt the impact of their votes. And explain that "With all the ads, all the lies, you can't believe the candidates--and I don't want to vote for the wrong person." In response, we point out numerous examples of close races, from the 537-vote Florida total that handed George Bush the presidency in 2000 to Virginia's 165-vote Attorney General race in 2013. We address their belief that "they're all corrupt, they're all the same" by creating non-partisan guides to candidate stands (vetted where possible by both campus Young Republicans and Young Democrats), which schools distribute through campus newspapers, campus mail and email, and display in high-traffic areas like the student union or residence halls. These guides, students say, let them see "what the candidates actually stand for," helping them decide both who to vote for and, for many, whether to vote at all. 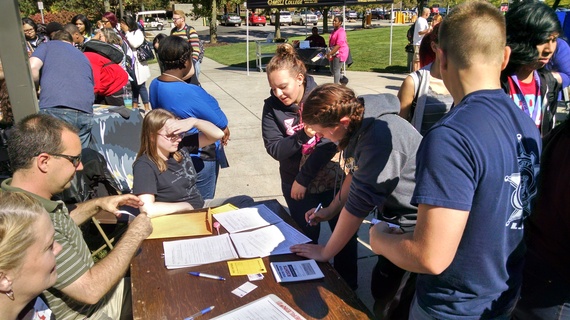 Because we tailor our strategies to schools, not all are applicable to off-campus youth. But it's key to remember the value of person-to-person outreach. We use all appropriate technologies, like convincing schools to use the online registration tools of Rock the Vote and Turbovote, and to distribute key information via social media, email, and text. But we focus on direct conversations, where students have the chance to convince each other that electoral participation is worth it. We reach out through existing networks and create a strong sense of visibility, so electoral participation and discussion become a salient part of the culture. We approach those we engage through institutions in which they already participate, which is something community groups can do as well (www.nonprofitvote.org has terrific resources on ways to do this while remaining nonpartisan). We walk students through the new voter laws, because, unfortunately, they risk being disenfranchised if we don't. Community groups need to do the same for those they reach. Most of all we give them a sense that their participation matters. Elections won't by themselves create the changes that our country needs. But coupled with other forms of citizen engagement, they're an essential part of the process. And not participating guarantees selling our common future to the highest bidder. Given our cynical times, we're all going to have to play a conscious role if we want to create a culture where young Americans once again participate in these critical public choices.

Paul Loeb is the founder of the national nonpartisan Campus Election Engagement Project. His civic engagement books, like Soul of a Citizen and The Impossible Will Take a Little While, have over three hundred thousand copies in print.