For as long as anyone can remember, Google's video personality has been deeply bipolar.

On one hand, there's YouTube, the massive consumer video storage and delivery platform that has grown so fast, and so dramatically, that its come to define what web video is. In just the 12 months ended in March, uploads to YouTube jumped from a stunning 24 hours per minute to 38 hours per minute. To put that in some perspective, that means that it would take one individual eight years of constant tube time to watch one day's worth of uploads.

On the other hand, there's Google Video, Google TV, and now an emerging new flavor of YouTube itself--all initiatives that search giant has put in place to try to capture their share of the television ad market, estimated to be $50 billion a year for broadcast, and $25 billion in cable in the U.S. alone.

Why is YouTube now launching a highly touted, deeply capitalized, and potential earth shattering shift to become the new "cable television programming" of the web?

The answer, simply put, is that they have to. And they're not the first program to be bent to the will of Madison Avenue.

In fact, back in the early days of cable TV, music television was re-invented by Madison Avenue. Here's a brief trip back in the time machine:

MTV launched the memorable and effective "I Want My MTV" campaign in 1984. And, as it turns out, people did.

MTV was a hit, garnering viewers and legions of fans for the fledgling music television channel. The only problem, MTV founders now recall, was advertising. Did Madison Avenue want its MTV?

It turns out, not so much. The reason was ratings.

MTV, with its short music videos, was getting lots of viewers to hop in, and hop out. Nielsen, the TV ratings company, rated networks on the quarter hour. So MTV wasn't moving the ratings needle, hence without the all important ratings chips that Madison Avenue bought their ads based on, MTV wasn't burning up the media buyers must-have avails.

So, what did MTV do? In the fall of 1987 they began to realize they couldn't just show music videos all the time, so MTV launched a trio of new shows: Week In Rock, Club MTV and Remote Control.

Then in 1992, MTV premiered The Real World, and in a happy accident, a show I created, MTV UNfiltered, which that may well have given keen-eyed observers a clue as to what YouTube would become. Viewers, it turned out, like to be content creators. But I digress.

So now Google is faced with the same problem. YouTube is wildly popular, yet its eclectic mix of YouTuber content creators, and short unpredictable web 'hits' are a viral phenomenon that are almost impossible to fit into a media buyers' annual budget strategies. So, with piles of ad revenue at stake, YouTube is finally listening to what Madison Avenue has been saying all along: "Make it look like shows and channels and we'll point our media budget firehose at your ad avails. Otherwise, we'll keep buying elsewhere."

YouTube is throwing money at some of the best known and most respected content creators working today.
As YouTube posted on its blog: "Our goal with this channels expansion, along with the grants and educational programs we've launched in the past year, is to bring an even broader range of entertainment to YouTube, giving you more reasons to keep coming back again and again. And for advertisers, these channels will represent a new way to engage and reach their global consumers." (Here's a list of the channels that YouTube has commissioned.) 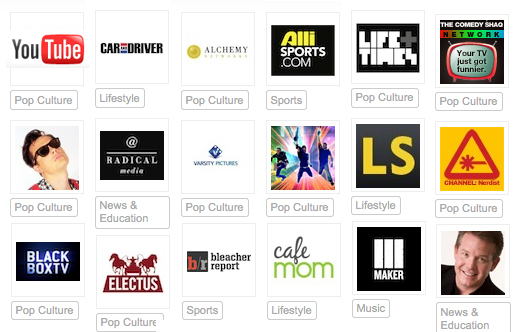 What YouTube has done is smart on a number of levels. Clearly more and more people are watching video on their tablets and mobile devices. Cisco reports that internet video was 40 percent of consumer internet traffic in 2010, but will continue to grow dramatically becoming 90 percent of global consumer traffic by 2015. That number has baked in the trend of flat screen users to connect to IPTV sources.

At the same time, YouTube has created a clutter problem in web video simply a result of their stunning success. Today video volume uploaded to YouTube has grown tremendously. Today, estimates put You Tube hourly uploads at 48 hours per minute.

The results is that video viewers, looking for quality or contextual content, are finding it harder and harder to get quality content. The solution that YouTube has implemented, curated quality channels, could well solve a problem for both viewers and advertisers alike.

But where does that leave YouTube's legacy business of free, consumer, 'long tail' content? Can YouTube both monetize the high-value paid channels, and create reasonable economics around the increasly noisy user-generated uploaded content? While YouTube's server costs and distributed storage certainly don't cost them much, you have to believe that the continued growth of uploads, and the relatively flat value of that inventory has to make for a tough business case. After all, the value of the inventory on the YouTube content is actually flat, or going down, as the costs and volume go up. Free video has fueled a powerful revolution, but nothing lasts for ever.

That said, video is here to stay, and on the rise. So expect new models to emerge to support that need, and lots of opportunity surrounding the video space as the market bifurcates.